One of the best "worsts" ever: Can Hieronymus Merkin... 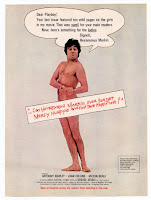 I’ve been very proud of the many obscure film clips I’ve shown on the Funhouse, but some demand that I return to them again and again, to confront the usual question, namely “what the hell were they thinking???” In the canon of really big and really crazy-bad (so bad they’re imminently rewatchable) late Sixties films, few titles loom as large as Anthony Newley’s ego-trip Can Hieronymus Merkin Ever Forget Mercy Humppe and Find True Happiness?

The film’s title sums up a major part of the plotline, but you’ll never believe the tripped-out weirdness that Tony N. presented us with in this film, which has, natch, never seen the light of VHS or DVD. Newley stars as a daydream/nightmare vision of himself — the ultimate song-and-dance man, a man highly desired by women, and the kind of a guy who would tell his life story (in excruciatingly egomanical) style to his two kids and mother on an empty beach, while a film crew (run by, who else... Anthony Newley!) makes a modernist musical sex-comedy out of it. Newley’s wife Joan Collins (who pretty much made on the argument on a British profile of her that the film was the goodbye kiss for their relationship) performs a musical number with Tony, while Milton Berle (as the Devil) and Georgie Jessel (as Death) contribute the “laughs.”

Here I offer a quintet of clips from the film. First, the film’s set-up, and intros of Georgie and Uncle Miltie:

The full “Chalk and Cheese” number, a duet between a nude Newley (thankfully seen only from the back) and his then-wife, Joan Collins. I’m not going to explain the dummy Hieronymus. Because I can’t.

Hieronymus meets Mercy, his Lolita-like object of fascination (played by Playboy Playmate Connie Kreski, who was 23 at the time).

The trippiest moments in the film and the ones wherein Newley’s Fellini influece is felt (to the detriment of ol’ Federico’s legacy). Includes a bloody Satanic mass presided over by Berle (Abe Lastfogel was a noted Hollywood agent):

One more trippy bit, and the latter half of the film’s dopiest sequence, a long fairytale song that appears out of nowhere called “Trampolina Whambang.”

Posted by Media Funhouse at 1:00 AM