The future of art cinema’s past is unwritten

To keep you folks up on the strange and sad stories of how the rights to great arthouse pics of the past are slowly "disappearing," let me pass on this odd tale from The New York Times in which it is revealed that the owners of a movie theater in Aspen, Colorado now own the rights to the films made by Svensk Filmindustri. Yes, that’s the right, the back-catalogue of the late great Bergman, plus everything else the company made, including such famous titles as Elvira Madigan and My Life as a Dog.

You can read how this ridiculous situation came about in the article. It makes a nice add-on to the death of New Yorker films (which I wrote about below, on this same blog). The latest news on that front? There will be an auction for the rights to some of New Yorker’s holdings tomorrow. To wit:

On March 12, 2009, Technicolor, Inc. and certain of its affiliates will be conducting a secured party auction sale of certain of the assets of New Yorker Films. The winning bidder(s) at the auction will purchase some or all of the available assets but not assume any of New Yorker Films' liabilities. If you are interested in participating in the auction as a potential purchaser, please contact *** of Technicolor - New York at 110 Leroy Street, 3rd Floor, New York, NY 10014, telephone number ****; email: ***

It is New Yorker Films' sincere hope that the purchaser of our assets will be a well qualified distributor with the intention and ability to manage and distribute the fine films we have had the privilege of distributing in a manner consistent with New Yorker Film's 43 year history in the independent film world. 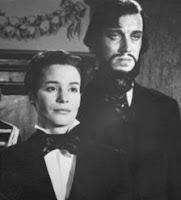 So certain arthouse masterpieces of the Fifties, Sixties, and Seventies are now sitting in a legal limbo. Sure, the best-known Bergmans are out on DVD (with dozens more available only if you hunt through troves of old VHS). But this indicates what one viewer-friend had called “the telescoping” of American culture. We have a view of things that has gotten very, very limited over the past thirty years, and as far as most moviegoers these days are concerned, foreign movies are a rarified taste (best ingested only if the film in question is critically heralded, and preferably based on a famous novel), or in film class. Sad, sad, fucking world….
Posted by Media Funhouse at 1:19 AM