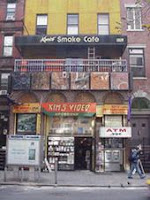 2008 was a very, very bad year for New York City stores and eateries. The number of places that are shuttering for good is growing literally by the week, but one particular closing evoked sentimental feelings in movie buffs throughout the city, namely the "alternative" vid-emporium Mondo Kim's on St. Marks Place. I considered the store a really invaluable resource for research for interviews and "Deceased Artiste" episodes of the show, and would travel from wherever I lived in this wacky metropolis downtown to rent discs and tapes (yes, tapes, kids!) so I could catch up on various artists' work. The odd thing about my connection with the store is that you couldn't help but have a sort of love/hate relationship with it. The eclectic range of the store's stock was incredibly important, and I'm speaking strictly of the rental department (I have a solid collection of films I've purchased on DVD and VHS, but have remained an in-store movie renter, who prefers "brick and mortar" establishments — as they are now sadly called — to doing the Netflix lazyman approach). Yet the clerks at Kim's were uniformly bored, smug, and in a few cases, openly rude. Being a regular Kim's customer did have its underside.

But let's remember the happier part of the equation, shall we? All those wonderfully rare movies, which have now become part of a fairy tale ending that will surely go down in video store lore. In case, you haven't heard, the rental stock of this Greenwich Village store has now been shipped to a Sicilian town that has a very eager, culture-minded mayor. The initial public "offering" for the rental stock made by the store's owner mentioned the continuation of memberships and other notions that seemed to squarely imply the desire for another retailer or library to purchase the collection: the poster with the offering can be found here. But now a *donation* of the entire collection has been made, so the citizens of a Sicilian town will have at their disposal 55,000 DVDs and tapes. The vast majority of the titles are in English or have only English subtitles. Among the collection is a fascinating assortment of avant-garde films, a fairly sizeable porn library, and yes, a good amount of bootlegged recordings (from imports, broadcast and cable airings) of rare films that couldn't be acquired otherwise. I had to leave the magic "b-----g" word out of the column that I wrote as a homage to Kim's for the trade magazine Video Business, as it was uncertain if the store would be "saved" at the last minute, and I wouldn't want to be the one blowing the whistle on such an important resource. We New Yorkers now envy the cities that still have "alternative" video emporia that have on their shelves the out of print, the outre, and "off-market" film titles.

My homage to Mondo Kim's
Posted by Media Funhouse at 12:49 AM

Your summing up of Monda Kim's is perfect. I, too, have somewhat mixed feelings about the place closing. The staff couldn't have been more insufferable if they tried (ah, trust funds). But their wares were extremely rare, if not unique. This is another example of New York becoming that much less New York-like. Overall, a total bummer. It's getting so I hardly recognize this city anymore.