You need this record (so take it) 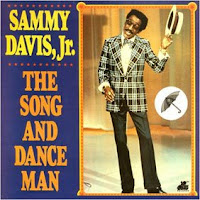 Sammy Davis was one of the most ubiquitous performers in show business from the Fifties to the Eighties. He particularly had a strong tie with the medium of television, showing off his skills as a consummate nightclub and cabaret entertainer on TV variety and talk shows (not that that stopped him from appearing on sitcoms, gameshows, and even anthology dramas). In the period of his busiest TV activity, the Seventies, he also recorded an album that included an incredible amount of TV themes. I have never found the alternate version of this LP (purported to be called "Sammy Sings the Great TV Tunes"), but one of our recommended blogspot colleagues has put the better-known variation of the record, called Song and Dance Man, up for public consumption in MP3 form. Grab it immediately, and hear Sam offer his Wham on the themes from "Baretta" (natch), "The Mary Tyler Moore Show," "Kojak" (yes, someone wrote lyrics to it), "Mary Hartman, Mary Hartman" (with Sam appropriately sniffing and singing her name over and over and over, astounding!), "Hawaii Five-O" (with a menacing lyric about "Devil's Day"!), and "Chico and the Man"). Someday I will find the other variation of this album, which supposedly contains the "Maude" theme. In the meantime, rock out on this gem. Thanks to Stephen for pointing this one out.

CLICK HERE: Sammy Sings a Whole Mess of TV Tunes, Making Us All Much Happier in the Process
Posted by Media Funhouse at 1:54 AM

Anonymous said...
This comment has been removed by a blog administrator.
February 2, 2009 at 9:20 PM