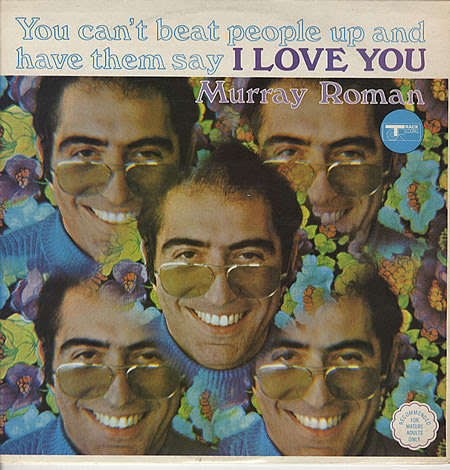 While I’ve been immersed in George Carlin material since his death last week, I have been brought back, time and again, to thoughts of George’s stand-up hero, the one and only Lenny. George used the lessons learned from Lenny in an original and innovative way, and went from outright impersonations of the guy (on his LP with Jack Burns) to doing linguistic and social hypocrisy bits inspired by him, to simply using his groundbreaking work as a springboard for his own precise and wonderfully silly explorations of everyday stupidity. He jettisoned the umbilical cord to the Great God Len by the mid-’70s when he turned “observational” commentator, with an anti-social edge.

A comedian who emulated Lenny to an incredible degree, and is mostly forgotten today, is the great psychedelic comic Murray Roman. I first heard a Roman routine on WFMU, when the now-departed but never forgotten DJ “KBC” (of overstuffed Xmas tape fame) played a war movie routine off of his You Can’t Beat People Up and Have Them Say I Love You. I was struck by how much the material sounded like the Firesign Theater, but Roman’s nasal, hip delivery was surely Bruce-ian (Bruce-esque?). Roman made only four albums in his lifetime, and though only two of them can truly be called finished products, he does serve as a bridge between the genius social commentary of Lenny and the “head” humor of the Firesign Theater. His records are mindwarpingly strange and cool, and perfect time capsules of their era.

Roman began, like Carlin, Pryor, and everyone else in the Sixties, as a “straight” comic playing nightclubs. He carved out a specialty niche in Aspen, Colorado, humor about skiing, which is explored at length in his forgettable first LP Out of Control. By 1968, he had opened the Doors of Perception (in fact, he opened for the Doors at one point) and became a psychedelic stand-up, who combined Lenny’s hipster cadences and expressions with a speculative tone that makes him a forefather to such Seventies drug absurdists as Cheech and Chong. His most notable gig was as a staff writer for The Smothers Brothers Comedy Hour, undoubtedly one of the hippest shows on the air in ’68-’69. Following that show’s rapid finale, he apparently kept doing stand-up, and sadly died from injuries incurred in a car wreck in 1973 at the age of 44.

Roman worked as an opening act at rock concerts, but did very few TV appearances, aside from little acting gigs in Batman, That Girl, and the “Fairy Tale” episode of The Monkees (Michael Nesmith participated in his last album). Only two pieces of him as a comedian have survived: a bit from what appears to be a home movie shot at a social event with Keith Moon (see below) and the “writer’s episode” of The Smothers Brothers Comedy Hour which was rerun on the E! network in the early ’90s. Roman is a cipher, a guy whose cumulative legacy are his psych-comedy albums, the aforementioned You Can’t Beat People Up…, the black-covered album (decades before This is Spinal Tap….) called Blind Man’s Movie, and his final effort, a sort of mash-up of the previous two albums with some new material called Busted.

Very little has been written about Roman, aside from entries in a few comedy reference books and websites. It turns out, though, that one intrepid fan/journalist undertook some heavy research into the guy, and posted his findings on the WFMU Beware of the Blog site. A person known as Kliph Netsteroff (if that is indeed his name, as Ter Southern used ta say) has authored a great article on Roman that provides information on him gleaned from interviews with Tommy Smothers, Steve Martin, Bob Einstein, and Mason Williams. In fact, Kliph (who has written about other Funhouse faves like Henry Morgan and Arnold Stang) has even posted links to the unedited transcripts of his Roman/Smothers-related interviews (except for one thing Einstein refused to say “on the record”) on his blog, Classic Show Biz. The WFMU blog article also contains links to downloadable MP3 versions of You Can’t Beat People Up… and Blind Man’s Movie (1972). Check out the article and the albums. And also scope out this one tiny little remainder of this interesting comedian’s career:

Murray Roman was a pal of Black Pearl-Atlantic records who he met in Aspen.
They played the music tracks on his album, Blind Man's Movie. Murray introduced us at the Lenny Brucemas on the Cheetah/Avalon ballroom Pier in Venice, CA 1968 - see the film on Youtube - search lenny brucemas. Black Pearl had 2 albums before they reformed and retired for a while. Murray introduced us many times in many different venues including the Filmore.

Murray was a very cool guy and a good pal to the band. we always loved it when he would show up at a gig. He was as funny off stage as he was on. he had a great attitude and we were shocked as all hell to hear of the tragedy of his death.