"Living well and ripping your enemy's still-beating heart out with your bare hands is the best revenge": the forgotten work of Michael O'Donoghue

Since the post below begs the question, what exactly do you find funny, Ed, if you can’t laugh at the hee-larious antics of that tall, gawky, spontaneous, and oh-so-glib Will Ferrell whom millions’a happy souls think is really a panic? Well, I have already offered a few dozen answers on this blog, but I will supply one more: Michael O’Donoghue, aka “Mr. Mike,” the rapier-sharp nasty black humorist whose wit was exhibited in The National Lampoon (both the magazine and the radio show).

He was no doubt the best writer ever to toil in the Lorne Michaels “we’re gonna run this fuckin’ character into the ground” factory that seems to amuse so many folks who want to watch TV in real time on Saturday evenings (hey, in NYC, just flip over after you’re done laughing yourself into unconsciousness, and give the Funhouse a try — I may be tackling a topic that doesn’t suit your fancy, but I can guarantee it won’t insult yer intelligence).

O’Donoghue’s life was well-chronicled in the essentially biography Mr. Mike by Dennis Perrin, but the true guts of the man’s material is to be found in a bunch of old Seventies (and, surprisingly, Nineties) magazines, plus on the discs of vintage SNL that are now slowly being shuffled out. He was the natural extension of the “sick humor” gods of the Fifties/Sixties (Bruce, Berman, Sahl, Nichols & May), but he added a very nasty rock ’n’ roll/punk sensibility (without ever playing the “rocker” roll himself, unlike the great Bill Hicks or the wafer-thin “Dice” Clay). 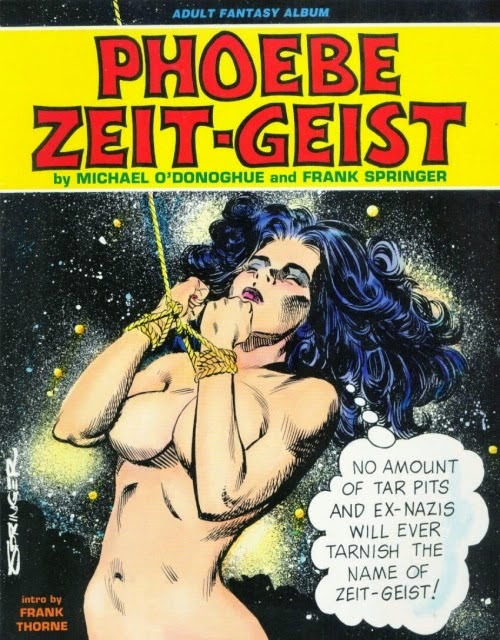 Mr. Mike was the late 20th-century’s equivalent of the brilliant magazine humor writers of earlier days (the Perelmans and Thurbers). His humor was extremely brutal, extremely fast, and extremely precise. He counted among his heroes William S. Burroughs and the inestimably perfect Terry Southern (check out a portrait of Tip-Top Ter by yrs truly), but he also no doubt drew inspiration by the sick souls who wrote with him at the Lampoon (the few anthologized examples we have of Doug Kenny prove he was one wonderfully twisted fuck).

There isn’t a lot of free Mr. Mike on the Web — a search on the official SNL site produced none of his “Least-Loved Bedtime Stories” or his odder creations like the Ricky Rat program. Instead we must turn (natch) to YouTube, where some helpful soul has uploaded the first five minutes of his Mr. Mike’s Mondo Video, which I was so taken with as a teen that I sat through it twice in a theater (it was short, and christ, when you alternate between sacrilegious and sexy material, and Root Boy Slim and his Sex-Change Band and El Sid himself, you couldn’t lose).

I also must direct you to two sites that have posted some of his brilliant writing (no, no one has hazarded “Children’s Letters to the Nazis” yet). The first is this one featuring the wonderful ”How to Write Good”, a guide to creating fine literature. And then there is this completely indispensible link to some of his “Not My Fault” columns for Spin magazine. O’Donoghue only did a handful of these, which have been Xeroxed and passed from hand to hand among sick humor enthusiasts for several years.

The site doesn’t have the one wherein [paraphrase, I'm doing this from memory] he notes that Whoopi Goldberg has done charity work for every humanitarian organization except the “Give Whoopi Goldberg a facelift because she’s an ugly bitch fund.” O’Donoghue took no prisoners when writing humor, which is the way it should be. He also hit on some universal truths in his seemingly scattered and angry rants. Check out the fourth column included here, which is his final word on the Rat Pack (this years before the heavy-duty sentiment set-in for Sinatra’s “clan” of compares. In discussing Liza Minelli, he gives us this bit of pop-cult wisdom:


"The person in the most pain wins."
This simple truth is the basis of all daytime chat shows-- "Notice me, Phil. I'm a woman and my husband beats me."  "Notice me, Sally. I'm a woman and I'm black and my husband beats me and my father sexually abused me."  "Notice me, Ricki. I'm blind -- so blind that I don't even know if I'm black or a woman -- and somebody -- it's so dark it's hard to tell -- beats and rapes me and I weigh 850 pounds."  "Notice me, Montel. I'm a woman, I'm handicapped, I'm fat, everybody from the mailman to the parish priest beats and rapes me, my son has Gay Bowel Disease, my daughter was born with pot holders for hands and I'm on fire right now."  "Notice me, world. I'm Liza."

I think he hit that target with a bullseye (and years before the even more pathetic ceremonial-ritual of the reality show “confession booth” came into being). I also think he was an incomparably funny individual.

Posted by Media Funhouse at 4:51 PM

The SNL Transcripts site has quite a few O'Donoghue sketches:

I hope you're happy with yourself. Because of you, I got onto a Mr. Mike kick (I only knew of How to Write Good) after reading this post and am now reading his bio and plenty of Phoebe and old Lampoon stuff I can find, too.

Another obsession for me! ;D