The last of his kind: Deceased Artiste Ted V. Mikels 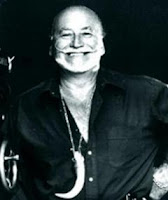 This blog is not intended to strictly be a Deceased Artiste web-shrine for Funhouse favorites, but it seems that so many of my favorites have been departing this mortal coil lately that we’re caught in an obit-spiral. One of my favorites who died a few weeks back was the legendary low-budget genre moviemaker Ted V. Mikels — this week on the Funhouse TV show I’m presenting the second episode I made from my epic 90-minute interview with him, but I did want to take a minute and include a tribute to him here.

I became aware of Ted through the interview with him included in the Incredibly Strange Films book from Re/Search. I then saw his Ten Violent Women (1979) on a double bill on 42nd Street and realized I had to see more of his movies, which were very available at video stores (mostly because Ted hadn’t retained all the rights to some of them and they were reproduced by all of the “cost-cutter” VHS labels that specialized in public domain films).

The episode of Jonathan Ross’s Incredibly Film Show (no affiliation with the book, except that the producers, um… borrowed the name and the entire concept) that profiles Ted is a must-see, as it covered both Ted’s movies and his private life, which was unique to say the least. He was a child magician, a ventriloquist, a movie stuntman, a cameraman for hire, a low-budget moviemaker, and a “guru”/filmmaking teacher to his “castle ladies” (dozens of young women who lived in his house over a period of several years and learned filmmaking by working on his shoots; they also were his “wives” but that’s a story covered in the interview segment below). 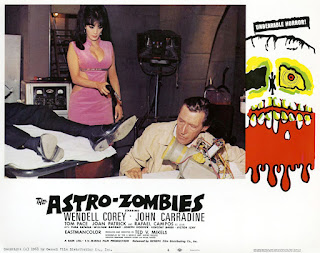 The most interesting thing about Ted’s films is that they were exploitation of a kind, but they rarely got even an “R” rating. He actually aimed for “PG” but producers wanted some of the features to be a little more “adult” (read: feature toplessness at very least). I wrote about Ted when I was freelancing for Time.com’s new media section in the early 2000s; I thought it would be a perfect fit to discuss his movies in light of the fact that the big-budget Charlie’ Angels feature was coming out at that time (as many Mikels fans had noticed that his Doll Squad had the formula of Charlie’s Angels a few years before the series appeared).

The entire article can be found on the Funhouse site here, but I will quote my (some may say futile) attempt to describe Ten Violent Women:

As the years went on I wasn’t able to keep up with all the micro-budgeted sequels that Ted put out — including two more Corpse Grinders, three more Astro-Zombies, Ten Violent Women Part Two, and the stunningly titled Paranormal Extremes: Text Messages from the Dead — but I was able to check out all of his older work, including one of the “lost” films (one he didn’t own the rights to).

The film in question is Alex Joseph and His Ten Wives (1977), which, as the title suggests, is a drama about polygamy. I reviewed the film on the Funhouse TV show when I got ahold of it from a mail order rare-video company, and particularly doted on this scene, which crops out of nowhere, with a gentleman singing about how much he loves the U.S.A.:

I will note in closing that Ted did indeed keep going with the sequels to his earlier films to the very end. He was completing Ten Violent Women Part Two right before he died on October 16 at the age of 87.

Ted was truly one of a kind, a guy who was outside the system for all of his life (except when he was a stuntman — during that time he appeared in action scenes in major Hollywood films with A-list stars). He carved out a little niche for himself and thankfully was able to receive much appreciation at the fan-cons.

Some of his pictures were uneven, but he was honest about that; he spoke openly about the problems he had securing budgets, and the techniques he had to develop to work around not having proper funding. I can still heartily recommend four of his films as wonderfully bizarre and entertaining: The Astro-Zombies, The Corpse Grinders, Ten Violent Women, and the * very * incredibly strange Apartheid Slave Women’s Justice (now known only as Female Slaves’ Revenge).

Here is a segment from my interview, in which Ted talked about the “castle lady” years:

And as a bonus clip, the intro to and a scene from the startling Apartheid Slave Women’s Justice:

Posted by Media Funhouse at 5:35 PM