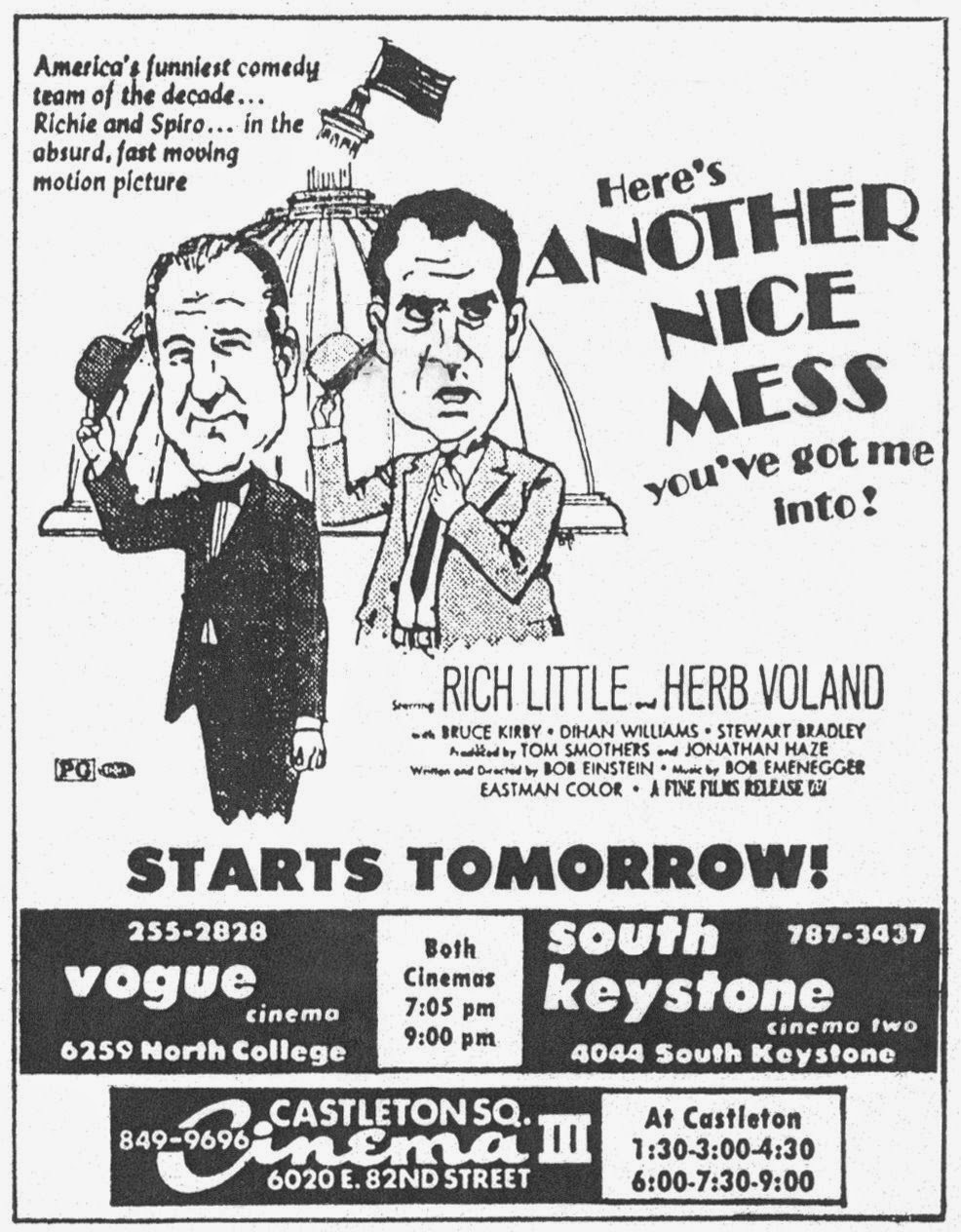 Some lost movies are forgotten masterworks, gems that have been hidden too long from public view. This piece is not about one of those films. The film in question is certainly historically interesting, and it's a major curiosity for comedy fans, but it's a startlingly awful picture, something that is so stunningly bad that you should take in a few minutes of it just to see how really wretched it is.

The film is Another Nice Mess, a 1972 comedy that has been effectively “lost” (read: no VHS or DVD release, no cable showings) for so long that it showed up on the esteemed Temple of Schlock's sublime ongoing list of “lost”movies . It's a political comedy that really a mess (and not a nice one) and is quite similar in terms of its schlockiness to two items I spotlighted years ago on the Funhouse TV show, Booker and Foster’s The Phynx (1970) and the astounding, non-porn comedy Linda Lovelace for President (1975).

The reason I was so surprised (and fascinated) at the film's 100% pure awfulness is that it was written and directed by an incredibly funny man, writer-actor Bob Einstein, aka “Super Dave Osborne” (and “Officer Judy” for those old enough to remember the Smothers Brothers variety show). Einstein has been doing funny material on TV from the late Sixties through to the present, from the Smothers show to Curb Your Enthusiasm. He's a great comedy writer who has humor in his genes – his father was the radio comedian Harry Einstein (aka “Parkyarkarkus”) and his younger brother is Albert Brooks.

Another very funny gent produced the picture — Tommy Smothers (the film is billed as a “SmoBro Production”). The Smothers Brothers Comedy Hour was one of the funniest and most cutting-edge variety shows of the late Sixties (so cutting-edge that CBS cancelled it), created by a very talented roster of writers and performers.

Another Nice Mess — notice the use of the actual Oliver Hardy phrase (often rendered as “Another fine mess”) — is a disaster from start to finish, but as with most items from the Nixon years, it is a fascinating and vibrant disaster. As I note frequently on the Funhouse TV show, the Sixties (which as an historical era of course extended into the early Seventies) as a time period is a gift that keeps on giving and giving….

The most notable thing about this bizarre artifact is that Einstein decided to “layer” the action. So, on the base level, it’s a broad slapstick farce in which “Richie” (Rich Little, dressed up to look like Nixon, but playing Oliver Hardy) and “Spiro” (Herb Voland, dressed up to look like Spiro Agnew, but playing Stan Laurel) get into various predicaments around the White House, unaware that Adolf Hitler (Bruce Kirby) is stalking them.

Other filmmakers have decided to “resurrect” L&H, most notably Blake Edwards in the horrific A Fine Mess (1986), which was Edwards deadly “variation” on “The Music Box,” and John Cherry in The All New Adventures of Laurel and Hardy in ‘For Love or Mummy’ (1999), a heinous production from Larry Harmon (who owned the rights to the L&H screen characters). 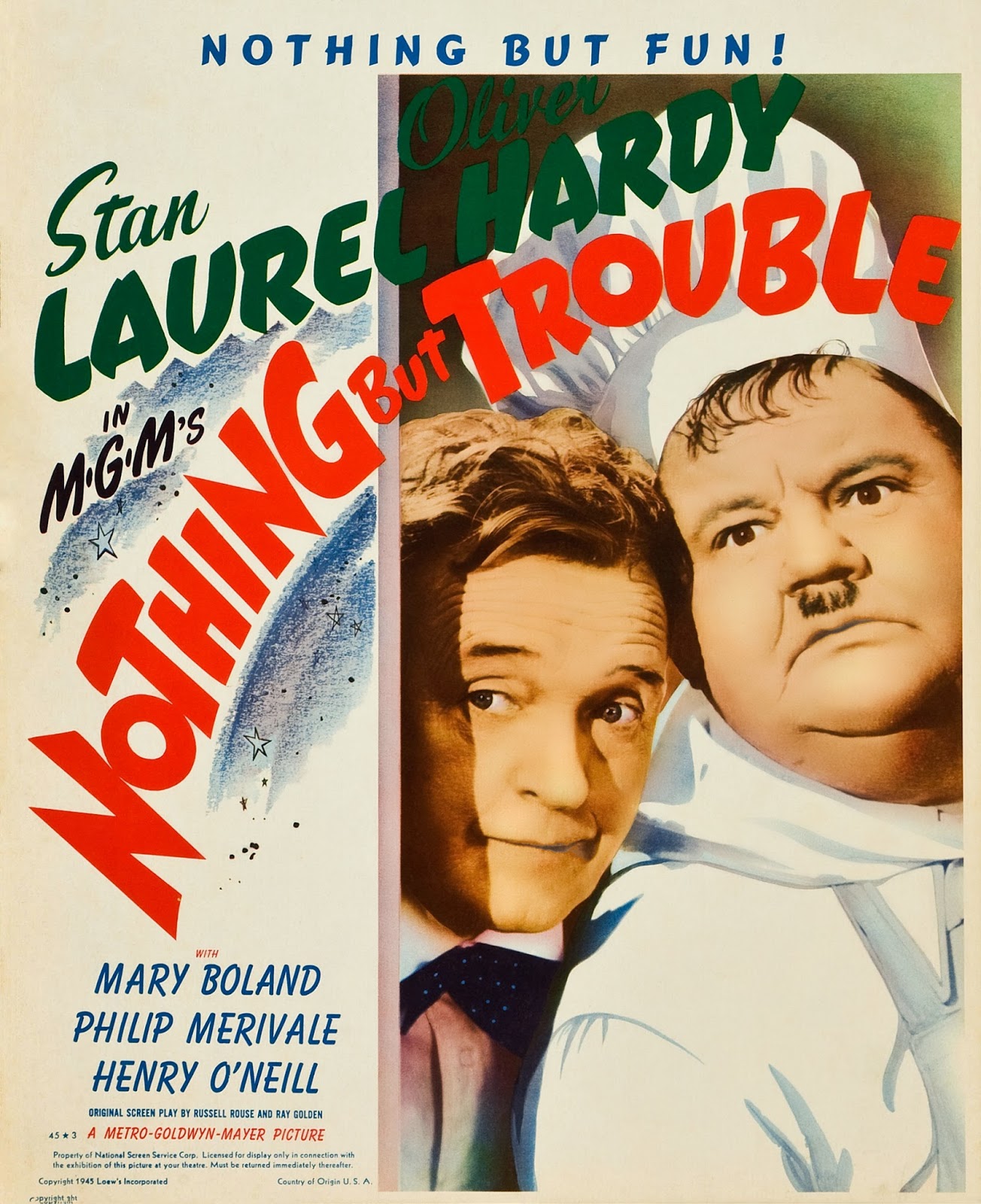 What Einstein did in Another Nice Mess was to intercut footage of the real Laurel and Hardy from their later, sadder vehicles (Air Raid Wardens and Nothing But Trouble) into his political comedy. And then he inserted scenes with Rich Little playing “the real Nixon” watching the film in a screening room. Little’s impression of Oliver Hardy is pretty meager, but his Nixon just wears you down (and is a pale echo of the great take on Tricky Dick offered by the wonderfully cartoonlike David Frye).

So what we’ve got in this film is another feature from the turn of the Seventies in which the characters “interact” with footage from Hollywood’s Golden Age. The most famous example of this phenomenon is definitely Myra Breckenridge (1970) — which includes L&H footage — while the best example of it is without a doubt Harry Hurwitz’s The Projectionist (1971), in which L&H are also referenced, because star Chuck McCann does a really wonderful impression of Ollie.

In watching this amazing misfire, I was reminded of another cosmically awful Blake Edwards’ film, Son of the Pink Panther (1993). There Edwards keeps cutting from a slapstick scene set in a hospital to a television showing a much funnier hospital scene from the Marx Bros’ Day at the Races. As you watch the scene, ALL you want to see is the Marx sequence.

Here, Einstein has the real L&H reacting to “Richie” and “Spiro,” and the results are even sadder and more misguided than Edwards’ blunder, since Einstein is reminding us of the older incarnation of “the Boys,” while attempting to use them to brighten up a comedy that can’t be improved.

Perhaps the surest sign that all involved were at a very low ebb humor-wise is the fact that a mock television commercial included later in the film (as “Richie” and “Spiro” get high on pot) is terrible and not even a good “sign of the times” (the best example of mock commercials from that same era can be found in Robert Downey Sr.’s terrific Putney Swope).

To add insult to injury, Einstein uses contemporary footage of a real anti-war protest outside the White House to no good effect — if the film was indeed intended to mock the fuck out of Nixon, the footage could’ve easily been used to deride Nixon’s policies. Instead, the picture is a PG-rated farce that has no bite and not a dram of truly satirical intent.

As a point of trivia, it should be noted that Steve Martin (who began his TV comedy writing career working for the Smothers) makes his movie debut in a very small role as “a hippy” (around the 36:00 mark).

The best thing one can hope for watching this picture is that all involved were heavily stoned at the time they made it. That way, at least someone had some fun. History buffs, take note of this movie; comedy fans, get ready to fast forward….


Thanks to Steve Stoliar, author of Raised Eyebrows, for noting that this sucker had come “above ground” on the Net. Steve had the wonderful experience of seeing the film in a theater with a friend who kept complaining that it was the worst film he'd ever seen. The lights came up... and they saw the film's star, Rich Little, sitting right in front of them.
Posted by Media Funhouse at 11:29 PM