The death of a master storyteller like Gabriel Garcia Marquez makes us think of the stories of his we've read, the ones we've neglected, and the impact a writer can have on our lives. I deeply loved 100 Years of Solitude when I read it many years ago, prolonging the reading of the book just so the damned thing wouldn't end. I need to return to his work as a reader, but in the meantime wanted to salute him by discussing his friendship with another one of Colombia's best good-will ambassadors.

Back in the summer of 2001, several months before her first English-language album came out, I did a tribute on the Funhouse TV show to several Latin singers whose work I loved, including Shakira. She is of course now an international superstar, but at that time she was a dark-haired Latin-Arabic beauty who wrote songs that were both incredibly catchy and which had an emotional and occasionally political resonance. 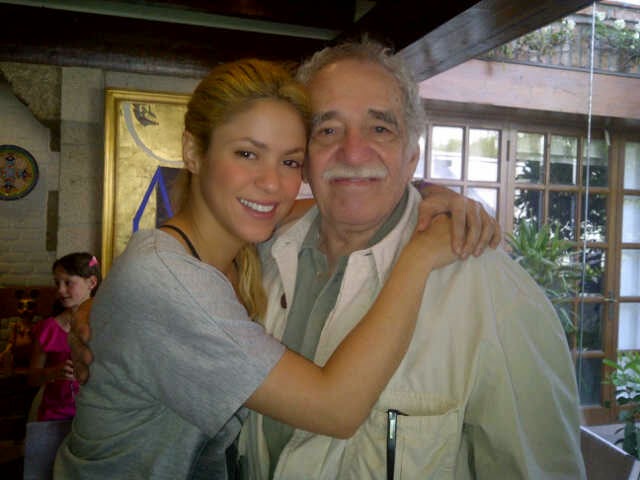 Much was made at the time about Shakira's IQ being very high, that she had a sharp, eclectic musical taste, and was able to speak eloquently about matters that pop stars veer away from (this is all still true today – only less emphasized in the American market, since we in the U.S. sadly prize the lowest-common denominator). The single event that crystallized just how serious Shakira could taken was the fact that Garcia Marquez liked her music and profiled her in 1999 for the Spanish-language magazine Cambio.

I have been unable to find that particular article online in either Spanish or English, but did come across this quote from it: “Shakira’s music has a personal stamp that no one else has and no one can sing and dance like she does, at whatever age, with such an innocent sensuality, one that seems to be of her own invention.” Wonderful praise from one artist to another.

Three years later, on June 7, 2002, this article appeared in The Guardian. It's a chatty and informal piece by Garcia Marquez that profiles Shakira; I'm not certain if it's a reworking/updating of the '99 piece, or something he did that was entirely new. In any case, it offers a fully-rounded portrait of the young star as she was making a splash literally around the world:

“Of the money she's earned, she says: 'It's more than I admit to and less than people think.' Her favourite place to listen to music is in a car, full blast, with the windows rolled up so it doesn't bother anybody else. 'It's the ideal place to talk to God, to talk to myself, to try to understand.' She hates television. She says that her biggest contradiction is her belief in eternal life and her unbearable terror of death."

Throughout the years, the two continued to encounter each other, but rarely in their native country. Garcia Marquez attended a Mexico City concert by Shakira in 2006. A TV news account of the meeting was broadcast in which there was only a few seconds of footage of the two together.

What the news organization did was dig up file footage of Garcia Marquez dancing at some other function (possibly years earlier) and the not-paying-attention Vulture blog declared it to be “Garcia Marquez dancing with Shakira.” This is interesting, in that their source was the Jezebel site, which merely described it as “Garcia Marquez shaking it to Shakira” (which is still not accurate, since they're not playing her music in the dance clip, but at least it's not as misleading as the Vulture headline).

Anyway, dig the guy's moves. He was *not* adverse to cutting a rug in between spinning magical realist fables:

I looked online for clips of Garcia Marquez interviews that are subtitled in English and found that there are precious few of those (at this moment). Below is the start of a documentary about him that is well-subtitled (and narrated by a posh British voice).

If you're more into the hardcore (and are bilingual), you could always listen to the full 100 Years... Spanish audio book online – which runs nearly twelve hours! The book is actually epic in scope, but not that much in length – the fascinating thing is that the mighty GGM was a more succinct and disciplined writer than the American school of “throw it all in, I'm as good as Tolstoy or Joyce!” fiction.

According to articles online, Garcia Marquez asked Shakira to contribute songs to the soundtrack of the film adaptation of his novel Love in the Time of Cholera. This is one she didn't write, a bolero called “Hay Amores”:

Finally, a bit of the music that Garcia Marquez was so impressed by. Here is the title track to Shakira's second “adult” album (she discounts two early efforts she released as a teen telenovela actress). The title of the 1998 album and song, “Donde estan los ladrones?” refers to the corruption in Colombian government.


And still my favorite Shakira music-video ever, because the song itself bristles with energy and the video (directed by Gustavo Garzon) is half-contemporary reality/half-dystopian sci-fi. “Ciega, sordomuda,” from the same 1999 album.

A sample of these lyrics: “Argument and methodology/fail me/each time your anatomy/appears before me./Because this love no longer understands/advice or reason./It feeds on pretext/and lacks nerve [literally, pants].... Brutish, blind, deaf-mute,/clumsy, lost, stubborn/this is all that I have been/because of you I've turned into/a thing that does/no other thing but love you/I think on you day and night/and I know not how to forget you.”

On her website, Shakira wrote this message for Garcia Marquez: “Dear Gabo, you once said that life isn't what one lived, but the life one remembers and how he remembers it to retell it...your life, dear Gabo, will be remembered by all of us as a unique and singular gift, and as the most original story of all. It's difficult to say goodbye to you, with all that you've given us! You will always be in my heart and in those of all who loved and admired you. Shak"
Posted by Media Funhouse at 11:58 PM

What does Gabriel Garcia Marquez think about making a telenovela movie of “One Hundred Years of Solitude” ?
Find the answer in an interview with Gabriel (imaginary) in http://stenote.blogspot.hk/search?q=gabriel