“Not exactly the boy next door”: kitsch (and intentional humor) in the work of Deceased Artiste Lou Reed (part 3 of four)

Before I talk about Lou's recorded output, I want to take a little trip into the world of Reed kitsch — some of which was intentional, some not so much. Lou’s sense of humor was mostly sardonic, grim, and cruel (best illustrated by the remarks he inserted into the lyrics of New York, including “stick a fork in their ass and turn them over, they’re done.”)

Sometimes he was not as cutting or attitudinal; he could occasionally exhibit a goofy sense of humor. One thinks immediately of his first big MTV music-vid (that was quite an odd moment), “I Love You Suzanne” and that extremely silly dancing at the end (is that Lou all the way through? You make the call):


Add to that his rather startling video for “Modern Dance” from the album Ecstasy, in which he wears a chicken suit:

In the movies he acted in, he usually just played a version of himself (as in Wenders’ Faraway, So Close! ('93) and Wayne Wang and Paul Auster’s Blue in the Face ('95)). One of his best “thesping” efforts (gotta love Variety-speak) was as a petrified Dylanesque musician (called “Auden”) in Allan Arkush’s loving tribute to the Fillmore, the rock comedy Get Crazy ('83). The film has never been released on DVD, but can be seen in its entirety on YT here.

Then there were the instances of unintentionally funny kitsch that Lou was a part of. For starters, there’s that tough-guy Honda ad he did for their scooter line. It’s hard to reconcile this gig with the dead-serious pose Lou assumed in interviews (then again, Henry Rollins is now a regularly heard voice in car commercials, so extremely serious “punk godfathers” do have a tendency to bend their principles when it comes to promos for wheeled vehicles).

The resounding thing here for NYCers is that Lou is seen in front of another long-gone Manhattan institution, The Bottom Line.

Now we hit the hardcore silliness. Lou achieved major “respectability” in the Nineties. One of the many signs that his music was being allowed into the canon of “classic rock” — in the UK at least — was the 1997 BBC charity single version of his “Perfect Day” sung by Lou and a cast of major celebs (Bono, Bowie, Elton John, etc). Best single juxtaposition: Tammy Wynette followed by Shane MacGowan.

What I’ve found extremely weird about that song being embraced as a sort of “easy listening” mellow-rock classic is that Reed follows his description of a perfect day in the park with a lover (with the killer verse, “you made me forget myself/I thought I was someone else/someone good”) with a final lingering thought/caveat/threat: “You’re going to reap just what you sow.” This serves to make the song something entirely other: a distant memory, an evocation of a happy time before the shit hit the fan, a happy moment in which another’s pain is possibly being ignored.

But the song has gone on to be sung by mainstream pop vocalists and even wound up on a PlayStation TV commercial (minus that last line, of course). It got to the point where the song was enshrined in the world of high fuckin’ kitsch at one of the “Luciano Pavarotti and Friends” TV charity concerts when Lou was joined by the mighty Pavo for a lofty-soundin’ version of the song:

The height of Lou’s whorishness resulted in a blessedly awful music-video, the tie-in vid for his version of “Soul Man” with Sam Moore. Recorded for the soundtrack of the moron movie starring C. Thomas Howell, the song is just a lame cover. But the video is just startlingly stupid. To inject a “Ghostbusters”-like effect into the movie, celebs appear lip-synching lines of the song. Thus, Lou and Sam are “joined” by Howell, Rae Dawn Chong, Jamie Faar, Bruce Willis, Cybill Shepherd, Elvira, and Gumby!

I can segue quite easily into a discussion of Reed’s recorded work by sticking to the topic of kitsch for a few more paragraphs. That “Soul Man” video above is hokey as fuck, but at least it wasn’t touted as “high art,” which POEtry, Lou’s second stage production with theater director Robert Wilson, was.

I will readily confess to being really bored with Wilson’s stagecraft. I saw his three collaborations with Tom Waits (The Black Rider, Alice, and Woyzeck); loved the first one, but found the second and third to simply be, for better and worse, copies of the first. A German theater troupe (Wilson's works have mostly been inaugurated in Germany, and thus American audiences see them performed by the German theater troupes) milling about in front of minimalist/Expressionist sets singing songs in English, with the cast members generally attired (and often made up) like Cesare the somnambulist in The Cabinet of Dr. Caligari.

POEtry, which played at the Brooklyn Academy of Music in 2001, went one step further — in it Reed and Wilson attempted something on the order of a Broadway musical, but one using the elements just mentioned. Lou decided that the short stories of Poe needed to be visualized, and thus “the Imp of the Perverse” was a grown man in a giant chair (he’s like a child, see…) singing about how he’s, well… [German accent] “sa Imp of sa Perverse.”

The show was clearly meant to entertain, but one got the feeling that Lou and Wilson were patting themselves on the back for having gotten to the “essence” of Poe’s work with this ragbag of cornball silliness. At one point the assembled cast turned to the audience to belt out the show’s theme song, and I realized I was watching a colorful but oddly sincere approximation of “the Time Warp” sequence from Rocky Horror intended as some sort of avant-garde art. (For the record I love TRHPS.)

I don’t believe in life after death, but I would pay good money to big, blustering Lester Bangs grabbing Lou by the lapels and asking “What the fuck was that Poe thing about?”


I got “off the bus” of Reed fandom with POEtry (one good thing came from it – I wound up reading Poe's collected works to “cleanse” my brain of Lou's take on the stories and poems). Everything that followed confirmed I’d made the right decision. Soon after seeing the show at BAM, I was at a reading for charity at the St. Marks Poetry Project, where Lou read his rewritten version of “The Raven” by Poe. An astonishing act of hubris, Lou’s rewrite is nothing special — he just changed around some lines and added what he felt was harder, more contemporary language. 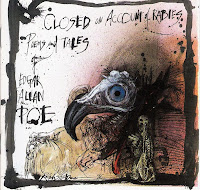 You can hear his rewrite of “The Raven” on the 2003 album of the same title, recited by the always up-for-a-challenge Willem Dafoe. The two-CD set is a bizarre creation that is half an album of new mediocre songs and half a spoken-word project by producer Hal Willner (whose work I dearly love). Willner had already covered this territory before with his album Closed on Account of Rabies (wherein Christopher Walken reads “The Raven” – and the world toppled from the mind-warping mixture of material and artist).

So the album works like this – you hear a quintet of actors led by Dafoe do radio-play-type recreations of scenes from Poe, then you hear a not-very-good song by Lou, then another bit of spoken-word (with Lou noodling around on guitar in the background), another song, etc. Appearing on the musical tracks are Laurie Anderson, the Blind Boys of Alabama, Ornette Coleman, the sublime Antony, and the indestructible David Bowie. But the songs are on this level (check out Lou's crazy-frog voice).

In interviews Reed talked about what he related to in Poe's work (the sense of self-destruction as a “life choice”), but he clearly felt he was a comradeship with old Eddie, so he decided to slide two of his own songs, “The Bed” (from Berlin) and “Perfect Day,” in amongst the supposedly Poe-influenced work, just to reinforce the connection.

The album's weirder moments – Steve Buscemi appearing as a lounge singer; Lou doing some “Metal Machine” feedback to approximate the fire in “Hopfrog” – make no goddamned sense, but then again Lou (who made sure to mock the Poe films starring Vincent Price in his lyrics) has the narrator of “The Cask of Amontillado” declare, “I will fuck him in the ass and piss in his face!” It's something Poe missed.


*****
After The Raven, Lou concentrated on reworking his Berlin album for live performance (the album had been a complete flop upon its release, but musicians and those dreaded journalists Lou hated so much had made it a cult hit). He also put out the aforementioned album of “Hudson River Wind Meditations” and the Lulu project with Metallica, which was misbegotten from the start and is often just plain painful to listen to.

Haines sang the countdown, while Lou rambled on in what can only be deemed as a senior-citizen version of his Take No Prisoners persona, the social commentator who never gets around to singing the song. Let me state clearly that I agree politically with every notion that Lou was unskillfully inserting into Shel’s lyric (I loathe Mayor Miguelito), but with each rambling addition, Lou was effectively killing the fucking song and not building up anything new and interesting in its place.

Here is a well-shot, well-recorded shorter version of the song via the SummerStage folks, but one intrepid viewer caught the whole damned thing (only seven minutes, but it lasts an eternity, if you know the Cash original, or are just a Silverstein fan):

So any diehard follower of Reed’s work experienced some pretty bad stuff over the years, in between the handful of genuine masterpieces — in this regard he is close to Dylan and far from the folks who’ve put out a smaller number of albums that are all pretty damned good (I’d count Leonard Cohen, Waits, Randy Newman, and Joni among these — yes, her last few albums were forgettable, but there were thankfully so few of them….).

In the fourth and final part of this entry, I will move through Lou's post-glam solo discography. And, yes, there WILL be praise!
Posted by Media Funhouse at 11:44 PM

Thank you for the Modern Dance video: beautiful.