Melody and melancholy: the Jacques Demy festival at the Film Forum, now until Oct. 17

Jacques Demy had one of the most curious careers in cinema history. He is often cited as being a filmmaker of the French New Wave but his work bears little resemblance to theirs – except for his debut feature Lola (1961), and even that is a more conventionally structured work than the early films of the nouvelle vague directors. He made three utterly sublime musicals starring Catherine Deneuve, but most of his other films are rarely revived, and the ones that were released on VHS and disc have for the most part gone out of print (or the companies releasing them went out of business).

Thus New Yorkers will get a rare treat when all thirteen of Demy's features will be shown at the Film Forum, running from today to October 17. I'm looking forward to the festival because it actually is two retrospectives in one: the first is comprised of the Demy films that have perennially been revived (these are the “essential” titles that everyone should see); the second is the group of films that *never* play in repertory. This latter group is the one that I'm eagerly anticipating, even though some of the rarer titles are reputed to be wildly uneven (to be kind about it).

Here is a quick montage of some of the livelier moments in Demy's films, compiled for a festival of his work at the Cinematheque Francaise in April of this year:

Demy was born in the village of Pontchateau and grew up in Nantes. After studying at the Technical College of Fine Arts in that small town, and the Technical School of Photography in Paris, he made a few short works, graduating to his first feature, Lola, in 1961. In that film he established his preoccupations: a broadly romantic love story, a simplistic plotline (one would almost say a “fairy tale,” but he got to those later on), and a bittersweet sadness underneath a cloak of gaiety.

His best films are all set in locations other than Paris. The second feature, Bay of Angels (1963), is a glamorous gambling drama starring Jeanne Moreau that highlights the city of Nice. Bay is a very good film, but its best moment happens right at the very opening:

Then came the trio of films with Deneuve (with a sojourn in the U.S. coming between the second and third). Here he took his love of American musicals and set to work evoking them while still creating something original and uniquely French with the aid of the great Michel Legrand. The Umbrellas of Cherbourg (1964) is his masterpiece and the film by which the rest of his works are measured. 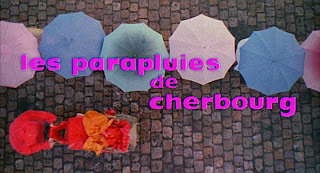 It's a beautifully realized creation that becomes more and more poignant as the years go by, since Demy was evoking a type of musical that had died out by the time he made the film. In the nearly five decades since its release the film itself has been cited endlessly and has inspired a generation of European (and, in a cultural cross-current, American) filmmakers who want to pay homage to the “great musicals of the old days.”

The film has definitely become a cornerstone of Deneuve's career – take for example her role as Bjork's friend “Kathy” in the unsettling and brilliant Lars Von Trier musical Dancer in the Dark (2000). More recently, Francois Ozon evoked Demy's classic in Potiche (2010), with Deneuve playing a woman who successfully takes over her husband's business (which just happens to be umbrella-making).

Umbrellas solidified the aspect that I consider the most striking and important thing in his work – the bittersweet undercurrent that runs below all of his plots, whether they are happily resolved or not. The film won the Palme d'Or at Cannes and was undoubtedly the high point of Demy's career. He followed it with another musical, one that is marvelously over the top.

The Young Girls of Rochefort (1967) is a candy-colored, mega-hyper musical that finds twins (Deneuve and her real-life sister Francoise Dorleac) in love – while a sadistic murderer is at large. This last element is just a peripheral detail that is brought up from time to time in the film, and it is the one aspect that makes me certain that M. Demy possessed a definite air of melancholy (all right, possibly even depression) in amidst his sunny optimism.

He clearly loved the cinema of Vincente Minnelli, Stanley Donen, and Gene Kelly – who has a supporting role in Rochefort and is terrific, despite some rather feeble French dubbing provided for him (one needs to hear Kelly's gravelly, smiling voice). Unlike his Hollywood heroes, however, Demy's best films all have an acute sense of melancholy when they are not downright tragic (as in The Pied Piper and Une chambre en ville).

This aspect is what makes Demy's work so unique and rewatchable – Rochefort is just so goddamned “up” that the murderer subplot serves to *ground* his lighter-than-air ensemble. The score by Legrand is extremely catchy, and (for conceptual continuity purposes for the Funhouse), there is a moment in which the twins dress and perform exactly like Marilyn Monroe and Jane Russell in the “Two Little Girls from Little Rock” number from Howard Hawks' Gentlemen Prefer Blondes.

Here is the trailer:


After Rochefort Demy's career started to go astray. I really like his next film, Model Shop, but it is downbeat from start to finish. It's an American remake of Lola (that functions plot-wise as a sequel), with Anouk Aimee reprising her role from the original film and Gary Lockwood playing her newest suitor.

When I interviewed Lockwood, he noted that he didn't much enjoy shooting the film (which is evident onscreen at points); he added that the film had received some kind of commendation in the early 2000s as a “great film about L.A,” which it is – his character and Aimee's ride around town, giving us an informal tour of what the city looked like in 1968.

The film is not a musical, but its soundtrack is memorable, as it blends orchestral music and tunes by the band Spirit, who play themselves in the film.


Here is one of the memorable “tour” scenes in the film:

Donkey Skin (1970) was the third and final film Demy made with Deneuve. It's an odd item that transforms a fairy tale into a musical with slightly hipper-sounding tunes (Legrand was apparently in the mood to get some lounge material out of this score). The plot concerns a king (Jean Marais) who wants to marry his daughter (Deneuve); the film makes reference to Beauty and the Beast by Cocteau in a few ways, including the casting of Marais.

In true storybook fashion, the film contains the recipe for baking a magic cake:

After the Deneuve musical “trilogy” Demy's films weren't critical or popular hits. As his career went into decline, his wife, Agnes Varda, went from strength to strength (due to the variety in the subjects she covered in her work). But Demy continued to make choices that resulted in great scenes, if not always terrific movies.

For instance in his next film, the British production The Pied Piper (1972) starring Donovan (performing his own songs acoustically, a major plus!), there is a scene that is *genuinely* creepy. At first glimpse the film appears to be another Donkey Skin, intended for viewers of all ages, but what would very little kids make of this lovely wedding party scene?

Perhaps the strangest item in his filmography was his return to filmmaking after six years in 1979 (after the failure of Pied Piper and the 1973 Mastroianni-Deneuve comedy A Slightly Pregnant Man). Lady Oscar was a Japanese-produced adaptation of a manga about a woman who disguises herself as a man and becomes Marie Antoinette's bodyguard before the French Revolution. The film was in English with English stars, but was set in France and shot by a French director. It has been one of five Demy films “lost” to American audiences.

The Film Forum festival of Demy's work contains two week-long runs, the second being a new restoration of Umbrellas of Cherbourg. The first is yet another lost title, Une chambre en ville (1982). This sequence – which, until the advent of YouTube, had been available to American viewers in Varda's documentary The World of Jacques Demy (1995) – is highly operatic and make the film seem as if it was indeed a return to form for Demy. Music... and heartache:

Chambre is the most eagerly awaited of the lost Demy titles, but I am also very interested to see what his odd-looking Eighties update of “Orpheus” called Parking (1985) is like.

I've seen Demy's final film, Three Seats for the 26th (1988), which is, again, thoroughly charming, but a very strange (and none too credible) hybrid of reality and fiction. Yves Montand plays himself, journeying back to his home town of Marseille to perform at the opera house. While there, he relives parts of his past, including a (fully fictional) fascination with the beautiful young Mathilda May.

All that is charming *and* all that doesn't work in the film (that synthesizer beat!) is present in this scene from the beginning of the film:

One of the most touching things about Demy's filmography is how it has been enriched by three films made by his very loving wife, Agnes Varda. She has made one film dramatizing his childhood ( The Beaches of Agnes (2008), to him.

While Mme. Varda was and is a superb filmmaker (her disparate fiction features supplemented by a number of documentaries and film shorts), her late husband did create his own instantly recognizable “universe.” He definitely made some missteps after the Sixties, but even his least works are enticing, as New Yorkers will be finding out for the next two weeks....

Some highlights, assembled for the French DVD box set of his work:

Posted by Media Funhouse at 1:45 PM