I was so intrigued by Curtis's answer to my question at his lecture, and the fact that his documentaries – and the Armory show in particular – boldly contradict what he had said about the avant-garde (in that they contain avant-garde moments, or entire passages) that I looked online to see if he'd been asked about his influences and his visual style. Some interviewers have indeed asked him about those elements – and they've gotten the same oddly dismissive answer that I received at the lecture.

In a June 6, 2011 piece in The Guardian by Ross Biddiscombe, Curtis states outright that he “is not a documentary maker, but a journalist who tells stories that 'take serious journalism and fine tune it with low-end trash and jokes' and he dismisses anyone who considers his films – with their unique convergence of quick-fire visual images and off-beat music and background noises – to be some kind of modern art form.” 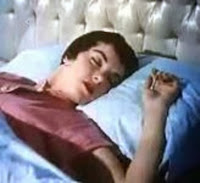 In an interview done by Nathan Budzinski for The Wire website in July of 2011, Curtis again dismisses that his telefilms have any artistic aspects. He says his style is a matter of “Trash pop. All I care about is trash pop... In the films, the inner DJ comes out. That is what it is, it's me nicking all the stuff I like."

Budzinksi cuts right to the heart of the matter by asking Curtis about his father, who worked as a cameraman for the legendary British documentarian Humphrey Jennings. Curtis's response? “'Well, we musn't fetishise it. Yes, he was his cameraman, that's it really. And he [Curtis's father] took me to see a lot of pretentious avant garde films when I was a child.' I ask if he remembers any of them. 'I think they were Jean-Luc Godard films, but I don't remember. Basically I thought they were a bit boring [laughs]. I just remember them having a lot of energy.' "

Curtis is also asked by Budzinski about influences. “Guy Debord's Society Of The Spectacle or Chris Marker's films spring to (my) mind. But Curtis is elusive. He says that Marker is an admirer of his and that they've met through a mutual friend, but doesn't admit to having watched his films. He thinks Debord is too intimidating and obscurantist.” [emphasis added]

In an interview posted on July 7, 2012 by Chris Darke on the Film Comment site, he is again asked about Marker, for obvious reasons. He says that he was told by mutual friends that Marker liked his work, but “I don’t really know that much about art film history. I nick good ideas I see, but I don’t really know that much about him. All I know is that he’s like a god of that world so I’d be terrified to meet him. I do like his films a lot, but I don’t really think they’re like mine at all..... He can do sustained things, and I wouldn’t know how to do that. I wouldn’t know how to begin.”[Emphasis added.]

In the Film Comment piece, he also goes off on “the art lot.” When asked to clarify, he says, “People who make art! For some unknown reason they’ve decided they like me and I’m always incredibly rude to them. This goes back to my fear of Chris Marker, that there’s another way of portraying the world, which I don’t understand because I have a deep, almost nerdy, desire to explain....”

There is a heavy element of teenage rebellion in the way Curtis speaks about well-respected filmmakers; it has the air of someone who feels that things deemed to be “high art” aren't entertaining and should thus be mocked and rejected entirely (but only after you “nick” ideas from them). It also curiously smacks of the “populist” attitude that Curtis himself attributed to Rupert Murdoch in this segment he did for Charlie Brooker's 2011 Wipe:

There is something oddly disingenuous about this line of argument – there is an evident glee at “rebelling” against the older generation of documentarians (including his dad and his colleagues), “the art lot,” and anyone who respects their work.

The final key point in the Wire interview is one that he raised in the lecture at the Armory, and one that immediately occurs to anyone who is trying to assimilate his opinions: he feels that present-day society is being buried under the crushing weight of images and music from the past, and yet he himself assembles documentaries that are perhaps 75% old footage (depending on the project). How can he reconcile that? 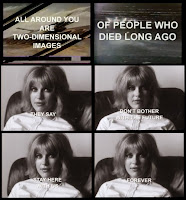 He admits that he is indeed “part of the problem.” At the lecture he noted that there was a moment at the close of the “MA vs. AC” show that would acknowledge that both he and Robert Del Naja of Massive Attack indulge in the same kind of romanticizing of the past that he's condemning. I witnessed no such moment in the show, simply a blanket condemnation of viewing the work of “dead stars” on a daily basis on the Internet (at this point an image of Michael Jackson moonwalking heralded the Attack playing a great cover of “Bela Lugosi's Dead”).
******

So we are confronted with an incredibly talented contrarian who dismisses the notion that he is an artist, and yet he assembles gallery shows and multimedia events for performance spaces. He's in a lineage of filmmakers for whom he evidences a dismissive, often disdainful attitude. His questioning of the “government line” and expertise at connecting the dots in his documentaries has also brought him an audience of, for lack of a better term, “conspiracy theorists,” whom he dismisses completely in his blog.

So is his work art, journalism, or a “lark” [his phrase] he's having with found footage? Three final thoughts on these contradictions:

– Curtis has been proud (as he should be) that his documentaries have gotten very good ratings when they've debuted on the BBC in prime time on weeknights. The UK is obviously very, very different from the U.S. Here, Ken Burns' more staid docus do run in prime time but on PBS, where they have a viewership of the folks who generally watch PBS: free-thinkers, usually liberal or left-wing; seniors looking for “something intelligent on TV”; those who still read as well as consume cable/Internet culture; and, yes, those dreaded intellectuals.

Curtis's work hasn't been released on DVD (in either the U.K. or the U.S.) because it contains footage that has not been “cleared” for other media. Thus the only way to see it as an American is to wait for it appear at a local documentary film-festival, catch it on the Internet, or be exposed to it by an enthusiastic friend with a collection of British television on DVD-r (or perhaps by a local cable host like yrs. truly).

In the process Curtis is developing a cult of admirers over here, made up of all the people he claims to disdain: intellectuals, Lefties, conspiracy theorists, pop-music cultists (those who can deal with a political narrative disrupting their favorite tunes), and cinephiles.

– The missing element in Curtis's work thus far is a positive statement about any school of political thought or a past movement that was on the right track. As I noted in the first part of this piece, artists are not responsible to offer solutions to social problems.

But if the artist states that his message is to show the viewer that he or she can “take control” of society and the media, some kind of direction should be indicated, if only by way of showing a historical movement that did work (as friend Charles pointed out, all historical regimes eventually “fell,” that's what history is all about). Possibly there is one solitary Utopian philosophy that Curtis believes can succeed? Perhaps the inclusion of this would make a “bridge” between the sytems-that-failed and the “you can take control” finales.

– The filmmaker who was able best to able to explore historical failures and still leave viewers with a sense they could “take control” was (wait for it) Chris Marker.

In his absolutely brilliant Grin Without a Cat (1977/88), Marker juggles several narrative strands about the political upheavals of 1968. He chronicles what was effective about the New Left and also what made things “go horribly wrong.” In The Last Bolshevik (1993), Marker explores a program that failed (a “film train” intended to introduce the production of art/entertainment to the average Soviet citizen), pointing out how it has left a legacy of promise for those who study it today.

And lastly, The Case of the Grinning Cat (2004) is Marker's last full-length video work (running only an hour). He shows us current protest movements and argues that today's “young people” are not apolitical, they just need to be stirred into action. It's a very moving work, and, yes, it does present Marker's favorite whimsical touches, including much doting on images of cats. (In interviews Curtis has noted he likes to "sneak" footage of animals into his docs, especially marmots.)
******

I look forward to seeing what Curtis will present us with in the next few years, but have no idea what to make of his filmmaking put-down shtick. Is he forging a brand, rehearsing for the eventual move to the Right that usually accompanies mid-life crankiness about the futility of political change, or simply being a contrarian on a much larger scale (and with the no-interviews-on-camera decision, again “nicking” from Marker)?

Only Curtis can answer the above questions, and the responses above delineate his position thus far. But I want to end this entry on an “up” note (well, musically at least). Thus I will close out with his trippiest work, the 2009 fantasia It Felt Like a Kiss. You can decide whether it qualifies as journalism, art, an op-ed essay, a lark, “pop trash,” or a serious social statement. I think it should be required viewing for Americans who like Sixties culture but who mostly avoid thinking about the tumult of the decade, and for those who are interested in seeing a kinetic way to assemble found footage.

But, then again, I'm a cinephile and an admirer of Curtis's work. I would think that, wouldn't I?