Hipsters, Flipsters, and Finger-Poppin’ Daddies: the art of Lord Buckley 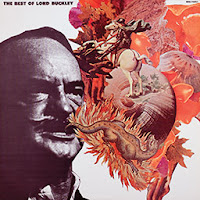 Lord Buckley was a one-of-a-kind performer, a comedian who doted on language and precise wording. I’m assuming most readers of this blog knew who he was, but for the uninitiated I’ll just say that he was a pre-Lenny Bruce standup who could be better described as a spoken-word artist, since his routines were comprised of poems, myths, and literary evergreens transformed by his fertile and indelible use of jazz-musician slang.

The good Lord (full name: Richard Buckley)  was a distinguished-looking white gent who was thought to be black by those who never got to see him in nightclubs or in his few brief forays on television. Although his work would seem to be rooted firmly in its time period, it remains fresh and vibrant today because of his beautifully colorful way with words and his delivery, which ranged from a rather high-toned. British-sounding erudition to a low-down growling voice that lingers forever in the minds of those who have heard it.

Buckley occupies a singular place in several spheres. In comedy his “hipsemantic” language surely influenced Lenny Bruce, and his verbal inflections can be heard in a LOT of George Carlin. For a pure illustration of George doing Buckley, check out the Toledo Window Box LP. 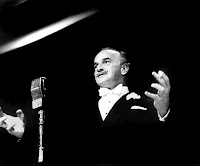 When asked by Marc Maron what other comedians he hung around, the late, great Jonathan Winters said he was “running buddies” for a time with Buckley (oh, to be a fly on the wall for their talks…). On the Lord Buckley website, Winters is quoted as saying, “I think he rubbed off on all of us that knew him. I wouldn't go so far as to say influenced me.”

One also hears Buckley in Captain Beefheart’s delivery of his spoken-word pieces; the good Captain’s friend Frank Zappa made certain that when he got his Straight record label, one of the first albums he put out was a collection of then-rare Buckley tracks (as a most immaculately hip artistocrat). Tom Waits has also namechecked the Lord several times as an early influence.

Buckley’s work was also a clear foreshadowing of the verbal playfulness of Kerouac and company in the Beat Generation (Buckley’s greatest routines were developed in the early to mid Fifties, while the Beats’ “greatest hits” all appeared toward the end of the decade). 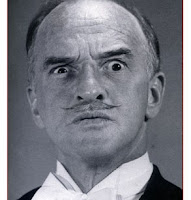 I had thought that there was no performance footage of Buckley in existence, but one of the best aspects of YouTube is the fact that diehard fans are willing to share their obscure acquisitions. And thus I put up a blog post in 2007 noting that there finally was footage of Buckley in public view. It turns out that another helpful soul has added to this small trove of treasures, so I decided to completely update my old post (which also made sense since one of the key entries has now gone down).

The two best video intros to the Lord are the two clips that have been up the longest. This slice from the documentary Chicago: First Impressions of a Great American City (1960) shows him performing one of the key moments in his “hip” account of that Jesus guy, “The Nazz” (which can be heard in its entirety here).:

The other great intro to Buckley is his appearance on Groucho’s You Bet Your Life. Groucho is a great straight-man for him — first tagging him as a con-artist (or, more precisely, a traveling performer) and then giving him all due respect when it comes time for him to do a bit of his version of Marc Antony’s funeral oration (audio of the full routine can be found here), which starts off with the phrase I used as the title of this blog entry:

To get a true sense of just how radically cool (and radically weird) Buckey's “hipsemantic” routines were, it is best to listen to his finest tracks. Transcriptions of many of his routines are available on the Lord Buckley website, including: 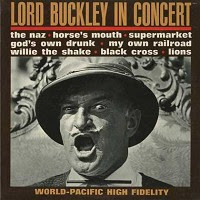 
– his succinct and wonderfully odd retelling of A Christmas Carol


– the very unique creation “The Train,” one of his verbal sound-effects pieces


– one of my favorite longer pieces by the Lord, “The Bad Rapping of the Marquis de Sade,” is only available on YT as performed by a Buckley impersonator, Rod Harrison (who does a great job with his impression, but loses a bit of the “regal” faux-British aspect to Buckley's delivery).

If you're heard some or all of the above, then you're ready for the “next level” of rarities now found on YT, a series of TV clips in which Buckley did his other acts, which were indeed vaudeville-type turns that predominantly revolved around his raspy, black-sounding voice. The earliest available footage of him comes from the ABC series Club 7 in 1949. He does a Louis Armstrong impression and an early spoken-word piece:

I recently went to the Paley Center and was thrilled to see there are indeed copies of a few Steve Allen Tonight Show eps (Steve often spoke about how the tapes for his years on Tonight had been wiped).

This particular segment from 1955 was a bit of a surprise, as Buckley does not do his verbal routines, but instead does a spoof of acrobatic acts with three gents from Steve’s cast (including Skitch Henderson and Andy Williams) and two audience members. It’s funny and incredibly silly, and not quite what I ever thought of when I thought of Lord Buckley:

An appearance on Ed Sullivan in 1955, where he again does a “gimmick piece” — I wonder if he chose to do these vaudeville turns, or if the producers asked him to avoid his “hipsemantic” routines. Here he does a bit in which he makes four people “dummies” for a dialogue that owes something to both Amos and Andy (the TV version) and his skill with hip talk. The participants are the Canadian comedy duo Wayne & Shuster, Trudy Adams, and the old human statue himself, Ed Sullivan.

The same generous poster has provided us with the Lord in his only movie appearance, in the 1952 comedy We’re Not Married. The scene finds an uncredited Buckley playing a dignified radio producer for married couple (or are they really — read the title!) Fred Allen and Ginger Rogers:

The final offering used to be available in its entirety, but is now up only in a “remixed” version, intended to “soup up” the material. Buckley provided the voice of the VERY beat-sounding “Wildman of Wildsville" in a “Beany and Cecil” cartoon (where they visit travel past places named for Lenny and Mort Sahl!).

Scenes from the cartoon are seen in this remix video, which adds very *loud * interpolations. (The poster does note that the character was done again, but with Scatman Crothers providing the vocal.)

Buckley’s last line said it all: "People are the true flowers of life, and it has been a most precious pleasure to have temporarily strolled in your garden."

For invaluable reading material, knock your lobes over at the Lord Buckley website, which has transcriptions, a full discography, and interviews with those who knew him (and one Studs Terkel chat with the Lord himself). The video links aren’t fully updated, though (the new items above should be added).
Posted by Media Funhouse at 2:36 PM