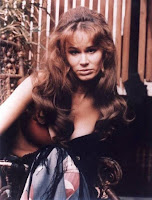 It's been a few weeks now since Karen Black's death, and I've been trying to think of what to say to summarize her career, her life, and the short time I spent in her presence doing one of the strangest Funhouse interviews ever.

First let me say that the run of great films she made between 1969 and '76 constitutes a really incredible body of work. She played a range of characters, from sharp to dumb, city girl to country hick, glamor girl to ugly duckling. Over the next three and a half decades she had an occasional good role, but the fascinating films she made in that seven-year period are her greatest legacy. 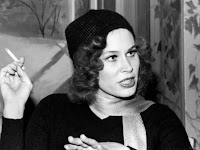 As for her life, I know only what I read about her. Her final months were spent combating a terrible sickness, reaching out to her fans for financial help (the tragedy of America's healthcare situation – we are the only “first world” country without nationalized care – remains the single most backward and awful aspect of our country). She worked steadily over the past four decades, appearing in a major amount of disposable genre pics, but every so often would get a featured role in an indie film that was worth watching. There weren't many, but they did appear....

As for my interview, it was indeed a “strained” affair for its first half. If I have the time I do like reviewing the subject's career – with Black that entailed asking her first about the lurid Herschel Gordon Lewis movie The Prime Time (1959). She acted for the first time onscreen in that film – she told me she was 12 and still living at home, but she was actually 20 and didn't have another film role until the absolutely wonderful 1966 Coppola NYC comedy You're a Big Boy Now (costarring, among others, the great Julie Harris, who died just this past weekend). 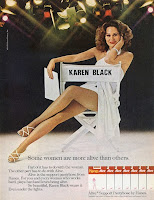 The interview continued to hit speed bumps – the oddest being an interruption that made it seem like she'd have to go entirely. Instead we began again and for whatever reason, her answers began to be more expansive, a bit more friendly, and refreshingly honest. As when she dismissed about a decade of her films and when she noted “that there are good horror movies and bad horror movies, but most of them are bad” – a truth I'm sure she learned firsthand.

The best moments of our chat were when she discussed the craft of acting and the work she had done with exceptional directors (Rafelson, Altman, Hitchcock). Some years back when I was putting together a “demo reel” for the Funhouse, I included this small sliver of our chat, in which she talked about ad-libbing in Nashville.

Here, however, is the rest of what she had to say about Robert Altman, who I fervently believe was and is one of the greatest American filmmakers of all time. Much has been said about improvisation on his sets, but I had never heard a performer discuss his lack of marks for the actors.

This came about when she talked about the play and movie Come Back to the Five and Dime, Jimmy Dean, Jimmy Dean. I'm very, very glad I had the experience of seeing the Broadway production of the show directed by Altman. I went to a Wednesday matinee of the show, filled with little old ladies sitting around looking bewildered. One of the blue-haired attendees was in fact so bored she broke out her knitting.

I loved the show and was particularly taken with the way it was set up: when the actors were in the front of the stage they were in the present (the mid-1970s), when they went to the back, they were in the past (the mid-1950s). Most of the old ladies couldn't figure this out, and absolutely all of them were confused by the absence of Cher (who was onstage from the curtain going up, but was dressed "down" as a waitress). When Karen Black entered as the glamorous transgender character a few of them audibly said, "that's her... that's Cher!" 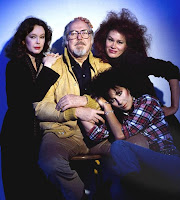 The play had a short run of 52 performances on Broadway and was turned into the first of Altman's “filmed plays” in 1983 (he shot the film on Super-16 converted to 35mm and secured the budget from, among others, Mark Goodson Productions). He took the special step of carefully delineating the two time periods in the film – when the characters are seen in a mirror they are indeed in the past (in different outfits that show they are younger; onstage they simply acted younger and were, again, in the back part of the set).

The film still isn't on DVD in the U.S. But copies of it are still circulating on VHS and on the “torrential” side of the Net from foreign TV.

Here is what Ms. Black said about being directed by Altman, first in Nashville and then again in Come Back to the Five and Dime.....

I'm dismayed how few Karen Black films I've seen - 5 Easy Pieces, The Outfit, A Gunfight; and it always made sense to me that Hunter Carson, the brilliant child in Paris, Texas, is her son. She's one of those dependably extraordinary 70s actors like Ellen Burstyn, and I think I thought I'd seen Ms Black more because I've watched 5 Easy Pieces so often. There, she at least matches Nicholson (who's at his best) for charisma and as a naturalistic actor, and she's touching, kind, annoying, lost, dim, insightful, sexy and funny. It's good to see you celebrate her.