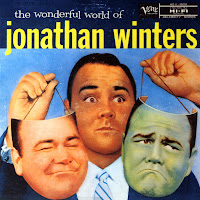 I want to slow down the production of obit posts here on the blog, but it is indeed hard not to rhapsodize about Jonathan Winters. He was, simply put, a complete original, a comedian who was unlike anyone else in the business. Sure, it's easy to see bits of Jonathan in later standups, from George Carlin and Robin Williams to the dreaded “prop comics.” But he was the complete package – a comedian who created not only characters but ensembles, situations, and settings with a tone of voice, an odd gesture, a crazed expression. He was perhaps the truest improv comedian of all, a performer who was willing to fail and flounder at points only to produce a phrase or line that could utterly floor you.

There are several reasons why Winters was so special. Perhaps the most important was that he was truly troubled in his personal life. His rapid-fire mind and ability to inhabit different characters at the drop of a hat was an immaculate talent, but it also indicated that his mind was indeed moving at a speed that few of us can recognize. He ended up being institutionalized in 1959 for two weeks and then had another collapse in 1961 (that time he was “in” – he liked to joke in his act about the difference between “out” and “in” – for eight months).

In this regard, Jonathan stands with only one other comedian who did literally suffer for his comic genius by having several mental breakdowns. That man was Spike Milligan, the immortal creator of The Goon Show and another indelibly original comedian. Both he and Winters were one of a kind and can never be replaced.

Winters was thus “a man apart” from his contemporaries – who ranged from the Vegas comedians (the Shecky Greenes and Buddy Hacketts) to the brilliant crop of standup satirists who emerged out of Chicago (Sahl, Berman, Nichols and May). He also was very different from his successors, who were not as plagued by their comic brilliance. Robin Williams might have had drug troubles over the years, but he always has been, at base level – despite the manic energy – a somewhat normal guy, as is evidenced by his impressive career as a dramatic actor.


Jonathan was not “abnormal,” he was just very... different. He was blessed with a talent that allowed him to act out entire scenes — something comedians had done since vaudeville, but which he did with a manic energy and invention that was infectious.

I’m one of many, many people who can attest to how magical his TV appearances were for children. His stagework seemed impetuous and was very silly, and thus went straight for kids’ funny bones. As an adult, I get his side remarks and the truly dark streak that ran through his work. Witness this piece from The Dean Martin Show:


Winters’ standup was truly unpredictable. The nailed-down bits were captured in about a dozen LPs that are a lot of fun to listen to, but do lack that one key aspect: seeing Jonathan’s rubber face contort, watching him move from voice to voice (he did ethnic characters and celebrity impressions, but tended to focus on dimwitted American characters of all stripes). 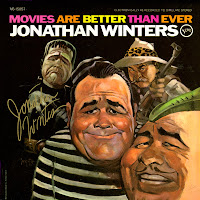 A bunch of his nightclub routines were movie spoofs, a standup staple throughout the Fifties and Sixties. If Winters did a Dracula sketch, though, he wouldn’t just do the requisite Lugosi impression — he’d do the castle door, the wind, the creaking coffin and staircases, and, natch, the “thup” noise of bats flying.

Winters’ records are not well-represented on YouTube — perhaps because most fans remember his visual bits the best. However, they can be heard on the private research blog Vintage Standup Comedy, which has a public “mirror” site here.

A short bit of chronology is necessary for those who don’t know where Jonathan “came from”: a native of Dayton, Ohio, he followed service in the Marine Corps during WWII (as an aircraft gunner) by becoming a student of cartooning at the Dayton Art Institute. There he met his wife Eileen, who was indisputably the most important person in his life (they remained married for 61 years until her death in 2009). 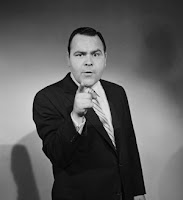 His entry into show business sounds like a tall tale, but Jonathan swore it was the truth: his art was going nowhere, so in 1948 his wife encouraged him to enter a local talent contest so he could replace a lost wristwatch. He won the contest and shortly thereafter became a disc jockey. Instead of simply playing records and giving the time/temperature/traffic, he began interspersing his “characters” on the air, and thus was born the Winters we all knew and loved.

He came to NYC in 1953 and got his big break in television, depending on what obit you read, on either Chance of a Lifetime with Dennis James in 1954, Arthur Godfrey's Talent Scouts, or Alistair Cooke’s Sunday morning program Omnibus. He soon became a regular guest on variety and talk shows.

The hosts who showcased him at his best were themselves the best: Steve Allen, Jack Paar, and Johnny Carson on the talk front, and Dean Martin and Andy Williams in variety. The reason was because he could literally take any simple prop and come up with a situation and character, in fact several situations and a multitude of characters. He was the first “prop comic” and pretty much the only one who was ever truly tolerable for more than a minute (Jon is not to be blamed for either Carrot Top or Gallagher):


Winters’ career was sidelined for a short time by his breakdowns in ’59 and ’61, but he returned with more frantic energy than ever shortly thereafter. I will move onto the clips here, but must lastly mention what was my single favorite thing about Jonathan: the fact that his improv was 100% legit (as opposed to the improv troupes that move immediately toward material they’ve prepared and performed before). 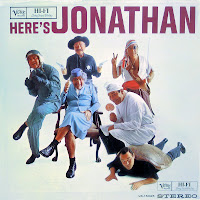 Winters impresses precisely because of the “gaps” in his bits, the moments where he’s not as funny. This was evident in the longer guest shots he did for Paar and Carson, in which the host would allow him to simply ramble on in character, to the point where he would seem to have lost his energy — and then a brilliant line would appear (or a look, or an odd noise).

It was this particular aspect of what Jonathan did that made him so incredibly unique, the fact that his improv was true ad-libbing, it went “up” and it went “down.” The fact that he recovered and would suddenly throw in something brilliantly funny was the essence of his art.

The single best intro to Jonathan’s imagination is this mega-montage put together when he was presented with a Lifetime Achievement Award in 2003 at the now–defunct Orinda Film Festival in Ordina, Calif.

The first part features Jon in a new interview saying the reason he improv’ed SO much was that “I get bored with my material.” This montage also includes him doing Maude Frickert and has one of the many “missing” (online) Andy Williams Show appearances, where he does the costumes-and-prop deal with Andy. Also included is the golden moment on Paar where he was presented with a simple stick and came up with a few minutes of material and several different characters.

The second montage from the Orinda fest contains outtakes of Jon ad-libbing a commercial for eggs and a terrific segment from The Rosey Grier Show (1969-70), in which Jon does his “black voice.” Today this would be deemed un-p.c. and offensive, but Jon cast his net wide and did a host of voices, so he didn’t leave any group out. You’ll notice Rosey is cracking up, so what he’s doing is not offensive, it’s known as true improv. On the level of genius.