A preview of the Funhouse interview with Cal Schenkel 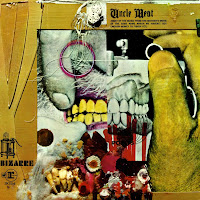 I am continually busy with Funhouse activity of one kind or another, but one of the greatest joys is hanging out with people whose work I've enjoyed for years. In this instance, a signing by Howard Kaylan (more on him in a minute) of his new autobio Shell Shocked at the Morrison Hotel gallery in Soho, NYC, afforded me the opportunity to speak with Cal Schenkel, the artist who is best known for his mind-altering album cover art for Frank Zappa and others.

This interview will appear on the show in a few weeks, but I wanted to provide a preview of sorts with this clip, where Mr. Schenkel discusses one of his best-remembered creations, the cover for the Mothers of Invention album “Uncle Meat”:

Posted by Media Funhouse at 2:51 PM