Mariangela Melato qualifies as one of those incurably sexy European actresses who also worked very hard at her trade, and was just as happy to be performing Shakespeare or Pirandello onstage as she was appearing in TV movies or big-budgeted feature films. For a lot of us, she will remain a talented and imposingly seductive performer, best known for the three films she made with Lina Wertmuller in the early Seventies. 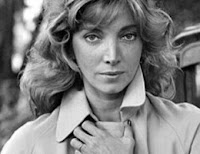 Melato, who died two weeks back at 71, got her big break onstage thanks to the playwright Dario Fo, who recruited her for his theater company and cast her in the wonderfully titled Seventh Commandment: Steal a Little Less. She later worked for Lucino Visconti onstage (The Nuns of Monza) and kept appearing in plays for the rest of her career. One of the most intriguing clips of her on YT finds her playing Blanche in A Streetcar Named Desire onstage.

Her movie career began with a role in Thomas (1971), a horror film by Pupi Avati, but her first really significant part came with the starring role in Elio Petri’s The Working Class Goes to Heaven (1971). Her first film with Wertmuller was the brilliant The Seduction of Mimi (1972), in which she plays the mistress of Giancarlo Giannini. In Wertmuller's Love and Anarchy (1973), she played the prostitute-sister of a would-be assassin (Giancarlo again).

For me and a lot of other film buffs, the “discovery” of Melato came with Wertmuller's timeless Swept Away (1974). Yes, I was a teenager when I first saw it and, yes, she looked fantastic in a bikini (with incredible eyes), but what came across in that film besides the carnal attraction between Mariangela and Giancarlo was the fact that Wertmuller wove in some wonderful insights about the class structure into her sex comedy, and that Melato was able to play a haughty bitch (a desirable haughty bitch) wonderfully while wearing only a bikini – something Madonna couldn't carry off in the misguided 2002 Guy Ritchie remake costarring Giancarlo's son.

The international success of the Wertmuller films resulted in Melato appearing in a pair of U.S.-funded films, Flash Gordon (1980) and So Fine (1981). She looked phenomenal in both, but they did nothing to enhance her acting portfolio and she was indeed a serious performer, so she returned to Italy to work steadily onstage, in film, and on television until her death at 71. 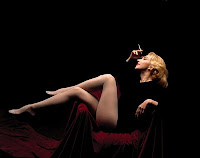 As for that last wordy title from Lina, we must remember that the real title of our fave LW film is actually Swept away by an unusual destiny in the blue sea of August. Wertmuller was the last filmmaker to indulge in that wonderful Sixties “Jacques Brel is Alive and Well...”/”Who is Harry Kellerman...?” sentence-as-title conceit.

But on to Mariangela on video. There are several dozen terrific clips of her dramatic acting on YouTube, with most of them in Italian with no subtitles. Speaking of unsubtitled clips (but it doesn't matter here): One of the many films starring MM that never had an official U.S. release was the Ugo Tognazzi film Le Petomane (1983) about the famous real-life performer Joseph Pujol, who entertained French audiences at the turn of the last century by farting onstage in creative ways (he was, wait for it... une fartiste).

The end of the film is on YouTube, and it looks just as wonderfully solemn-yet-insane as it sounds. If there was ever a project that I wish Funhouse favorite (and good friend of Ugo) Marco Ferreri had taken on, it is Le Petomane (the film was directed by Pasquale Festa Campanile).


Swept Away has always been available over here on VHS and DVD; thus the fan-generated videos saluting it. The whole film is available in an English dubbed version here (remember, the Italians pride themselves on their dubbing and watch a lot of foreign films that way – most cinephiles hate it and it's murder on comedy, but this would be okay for an Italian viewer). The film still works wonderfully nearly three decades on:

Some charitable fanboy (I'm willing to bet good money it's a guy) has decided to share some scenes from Flash Gordon, including the one in which Melato, as General Kala whips the sublime Ornella Muti.

Melato had a wonderful, smoky voice, which she used quite well in her acting and in her singing. However, I didn't know until I began to research this piece that she also danced on Italian TV variety shows. Here she is in 1986 doing a “Last Tango”-derived tango number:

Here Mariangela dances to Joe Tex's “I Gotcha” (!) on the show Canzonissima '72:

Posted by Media Funhouse at 6:45 PM