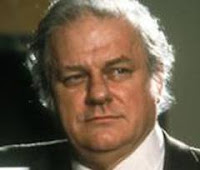 The other stalwart character actor who left us on Xmas Eve was Charles Durning, an extremely familiar face. Durning, who died at 89, appeared in over a hundred theatrical features and dozens of TV movies and series, but the most impressive facts in his obits concerned his earlier experiences as a bona fide war hero.
Before I rhapsodize about his scene-stealing work in movies by legendary modern directors, I should briefly run through his war history: drafted at 21, he became a rifleman in the infantry and proved his mettle on D-Day, when he took an active role in the Normandy invasion and landed on Omaha Beach. 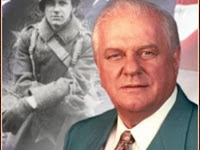 He was severely wounded by shrapnel, but stayed in the hospital for only six months – he returned in time to take part in the Battle of the Bulge. He was taken prisoner by the Germans and escaped, but his injuries were such that he was sent home. He was awarded a Silver Star, a Bronze Star, and not one but three Purple Hearts. He recounted some of the stories in this speech he gave at a Memorial Day Concert in 2007; the breaks in his voice while telling the tales have nothing to do with acting. 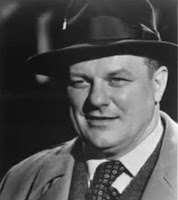 He worked several blue-collar jobs while attempting to carve out a career as an actor. His obits noted that his fortunes turned in 1962 when he auditioned for Joseph Papp, who cast him in a few dozen plays over the next few decades, with the turning point being his 1972 performance in That Championship Season. He won a Tony as Best Supporting Actor for the 1990 revival of Cat on a Hot Tin Roof ; other notable B'way credits including playing Ned Buntline in Arthur Kopit's Indians (later made into Buffalo Bill... by Altman, with Lancaster playing the role). Durning often declared in interviews that he preferred acting on stage to TV or films.

His work in stage plays continued as he scored role after role in the movies; key titles in the Seventies included The Sting and Dog Day Afternoon. Durning impressed in a number of films, among them True Confessions, Tootsie, and O Brother, Where Art Thou?, but his two Oscar nominations in the Best Supporting Actor category came for two underwhelming Eighties titles, The Best Little Whorehouse in Texas and To Be Or Not to Be. His best-remembered regular roles on TV were in Burt Reynolds' Evening Shade and as Denis Leary's father in Rescue Me.
So there is a LOT of Durning footage that could be featured here, but I'll center in on some choice clips discovered on YouTube, and the montage I created for this blog entry. Firstly, I knew I'd have to spotlight his solo number from Best Little Whorehouse... (1982). As a governor, he teaches us the central political lesson: how to “Sidestep.”

A low-key moment from Tootsie (1982), one of those let's-tidy-up-the-loose-plot-strands moments, where Hoffman and Durning talk after Hoffman has stopped his drag ruse:


And proving that there are just TOO MANY clips on YouTube at this point, I draw your attention to one poster who has had various performers recite terrific poetry for his video camera. Among them are Marion Seldes (one of her clips has as low as 7 hits), Willie Nelson (his vids have a more respectable amount of hits, but three of the four got no higher than 130 hits), and Durning. His recitation of a short Ogden Nash couplet (I should interject that I am a major fan of Nash) has a mere 25 hits and this very sober and affecting reading of E.A. Robinson's “Richard Cory” has only 27 as of this writing:


Given the above, perhaps it was foolhardy of me to post yet another clip to the site that is the visual linchpin of the Internet (one that has extremely dubious and fluid rules about content and “copyright violation”). However, I felt that the movie clips featuring Durning didn't convey his best sides as an actor.

Thus I offer you in the montage below:


– The extremely funny opening of Brian De Palma's Hi, Mom! (1970) featuring Durning (credited for some reason as “Durnham”) as an unscrupulous and slovenly super showing a callow youth (Robert De Niro) a really, really shitty apartment (this scene is the best representation I've seen of searching for an apt). Durning later had a major supporting role in De Palma's terrific Sisters.

– Another amusing sequence, this one from Big Trouble, a film starring Alan Arkin and Peter Falk that was scripted by Andrew Bergman and directed by John Cassavetes (his last completed film as a director), who was asked to take over after Bergman decided not to direct the film.


Here we see Durning essentially playing a brutally honest and foul-mouthed version of Edward G. Robinson's character from Double Indemnity. I have the feeling that Eddie G. always wanted to tell MacMurray and Stanwyck, “you're both full of shit and I'm going to prove it!”

– And Durning as the U.S. President in Aldrich's wonderful nuclear paranoia thriller and political drama Twilight's Last Gleaming (also '77). Here we see him react to the news, divulged by renegade general Burt Lancaster, that the Vietnam War was a piece of genocidal gamesmanship cooked up by the U.S. to compete with the Soviet Union.


The film is superb, and one of its strong points is most certainly its letter-perfect casting. Durning plays the president as a well-meaning politician who can't believe that the government would engage in a war strictly for “p.r.” The character was clearly Aldrich's defense against the possible charge that his movie was anti-American.