"Memories Are Made of This": Deceased Artiste Rosel Zech 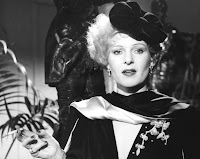 Rosel Zech, who died a few weeks back at the age of 69, had a solid theatrical career and was a well-known TV actress in Germany, but will forever be known by film buffs outside Germany for playing the lead in Veronica Voss (1982), the second in Rainer Werner Fassbinder’s “BRD Trilogy” (in the scheme of the trilogy it was second, but it was shot and released third).

Zech entered the theater in the early Sixties and continued to work steadily in plays until her death. She was mentored by the noted director Peter Zadel (who has a small role in Veronica Voss) and was best known in the last decade for her role as a nun in the German TV show For Heaven’s Sake. She had an extremely full career without Fassbinder, but her fateful meeting with him occurred when she appeared in A Tenderness of Wolves (1973; directed by Ulli Lommel, written by Kurt Raab, and produced by RWF).

He cast her in a supporting part in Lola (1981), and then gave her the starring role in Veronica Voss. He made one movie (Querelle) after that, and then died at the age of 37, leaving a body of work that will be enjoyed and analyzed for a long time to come. I talked to Ms. Zech for the briefest time at the 1997 MOMA Fassbinder gala performance, asking her to sign a book on RWF that contained pictures of all of his stars. I have a very strong and fond memory of where she sat in the first row because, by decision rather than by assignment, she and the other two “BRD” women sat in a row: Zech ("Veronica Voss"), Barbara Sukowa ("Lola"), and Hanna Schygulla ("Maria Braun").

All three women were riveted by a documentary that was shown at the gala, featuring a lengthy interview with RWF. The mood was strange but charming, since the three women seemed like schoolgirls, chuckling and whispering to each other while RWF was onscreen. Throughout that evening, I couldn’t stop thinking about how odd the seating had turned out to be, since for me (and a good deal of the male members of the audience, including a German diplomat who spoke at the event and talked about how important Ms. Schygulla had been to his youth), they were the “poster girls” for Fassbinder’s cinema.

The only sad note was that another MAJOR star of RWF’s work, the immensely talented Margit Carstensen (who was “Petra von Kant”!), was sitting across the aisle on her own, not in the schoolgirl circle of adoring Rainer fans. It was a strange and unforgettable evening….

Zech’s other notable U.S. arthouse release was Salmonberries (1991) by Percy Adlon. The film plays like a variant on his Bagdad Café, but is best known for the fact that it features the acting debut of k.d. lang (who does a quick and bizarre nude sequence) and featured her vocals on the soundtrack. I couldn’t find Zech featured in the trailer or promotional clips on YT, but she is present in this fan-made music-video (that doesn’t use a lang tune).

The last time I saw Zech onscreen was in Juliane Lorenz’s documentary Life, Love & Celluloid (1998). The docu includes a sort of fictional subplot in which a Fassbinder fan contacts MOMA and gets Zech’s address. He then flies to Germany and dances with her. The set-up for the situation is definitely odd — would a museum ever pass on an actress’s private contact information? — but the dance sequence is touching.

Zech’s website remains online and has been updated to include links to the nicest obits (the site is in German, and is mostly an online “portfolio”/resume of her work), but the ONLY way I can finish off this D.A. tribute is to embed Zech’s most memorable moment, her Dietrich-esque rendition of “Memories Are Made of This” from Veronica Voss.

The song was of course a No. 1 hit in America in 1956 for Dean Martin and was written by his backup singers, a trio called “the Easy Riders.” The song was also a massive hit in Germany, selling 8 million copies for singer Freddy Quinn as “Heimweh” (Homesickness).

Fassbinder chose to have Zech sing the Dean Martin original, though, in this indelible sequence that is Voss’s fantasy of the perfect “farewell” (the character is a drug-addicted, washed-up movie star that RWF modeled on the real-life actress Sybille Schmitz). It’s an incredibly good sequence with which to say farewell to her.

Posted by Media Funhouse at 9:40 PM