The coolest old men in the world (1): Leonard Cohen

Leonard Cohen turned 77 years old this week. In celebration, it was announced that a CD box set is planned of all of his albums to date — with much previously released live material, but no rare studio tracks, none of the poetry readings from radio and onstage appearances, and none of the many songs he’s sung or spoken on tribute albums (and the poems recited for the Philip Glass Book of Longing song cycle).

So a birthday is celebrated with a CD box set. The truth is that Leonard’s entire discography (like that of all major musicians) is available online with a few magic clicks, but one can easily go beyond and beneath the 11 studio albums — seven or eight of which are immaculate, and the other three are pretty good as well. The joy of a sporadic recording artist like Leonard is that, in comparison to a more prolific singer-songwriter (say… Dylan), you’re left with a small, sublime body of work, instead of a canon that contains very many crappy albums in between the masterworks.

In celebration of Leonard’s remaining with us for another year, I wanted to present ten clips that represent my favorite aspects of Cohen’s work. In terms of aging, though, I should note that I thoroughly agree with the eternally sublime free-form radio DJ Vin Scelsa, who has maintained for the last few years that Cohen is the very model of growing old gracefully — he’s stylish, smart, and (something Dylan never has done, and never would do) knows well how to mock and deflate himself. 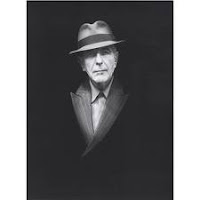 Although he is now a senior (as was shown unfortunately by the too-tight-close-ups in Lian Lunson’s docu I’m Your Man, where he wound up looking like Georgie Jessel), Leonard is the height of sophistication (as the wildly overpriced shirts and bags being sold on his last tour said, “It’s all about the hat… Leonard Cohen”). He’s also a supremely talented artist whose written works I hope will last as long as his recorded ones. But now on to the clips! 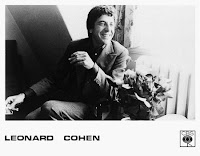 Like most movie buffs, my introduction to Cohen’s music (which was never played on the top 40-ish radio stations I listened to as a kid — “Suzanne” by Judy Collins excepted) was the soundtrack to McCabe and Mrs. Miller. Robert Altman — who remains for me the best modern American filmmaker, all naysayers be damned — used three songs from Leonard’s debut album Songs of Leonard Cohen in beautiful ways in the film.

Altman had gotten hooked on the album when he was in Canada shooting the long-out-of-print psychodrama That Cold Day in the Park with Sandy Dennis. Here is the officially released Warner Bros trailer for the film, available on the DVD. I have very fond memories, though, of a different trailer that I used to see at the old Thalia theater on the Upper West Side that concluded with a voiceover intoning the film’s tagline: “McCabe and Mrs. Miller — Name your poison” (one of the best taglines ever, especially when you’ve seen the film):

Here is a well-distributed documentary about Leonard before he went into music full-time, and was a noted Canadian poet and novelist. The film, Ladies and Gentlemen, Mr. Leonard Cohen (1965) is enlightening, in that Cohen is about 30 years old at the time of filming, but still has a strikingly adolescent goofiness about him. He is assured when reciting his poetry or reading fragments from his first novel The Favorite Game, but otherwise he’s affecting the pose of the “unpretentious artist type” in this portrait, done while he was back visiting his homeland (he lived on the Greek island of Hydra for a few years in the Sixties).

The National Film Board of Canada has placed the whole film on YouTube, but there’s a clearer version of it on their website:

I wasn’t sure what kind of gigs he had in NYC while he was better known as an author than as a singer-songwriter. Well, here is audio from one, at the 92nd St. YMHA. He reads two poems and sings a rather jagged acoustic version of “The Stranger Song,” made famous in McCabe…:

Another bit of verbal wonderment, Leonard reading “How to speak poetry”:

I recently read both of Cohen’s novels, The Favorite Game and Beautiful Losers. They are incredibly evocative, well-written books (I wish he had written more) that have elements that link them to both the “black humor” movement of the Sixties and the Beat poets’ fuel-driven remodeling of fiction. It’s an absolute delight to read fiction written by a poet, as the sense of language is always immersive and oddly playful (as was the case with my utter fave Richard Brautigan). Cohen had his own voice as a writer, a very strong one, and you can hear it in this fragment he reads from Beautiful Losers:

I will avoid any links to Leonard’s original, or any cover versions, of “Hallelujah,” as that song has been done and redone to distraction in recent years — he himself noted in an interview that there should possibly be an embargo on the song for a while (especially, I guess, after it appeared in Shrek).

Instead, I will offer you one of his most pointed comments on politics, in a spoken rendition he did for the United States of Poetry project. “Democracy is coming/to the U.S.A.” indeed. But will it ever get here? (We’ll have to settle for the military-obsessed republic/oligarchy we have in the meantime.)

Leonard jokingly titled the album he did that was produced by Phil Spector (who, yes, pulled a gun on him!) Death of a Ladies Man. He has a major reputation avec les femmes, and can only offer the rest of us an object lesson in how to behave. Here he is performing his perfect poem “A Thousand Kisses Deep”:

A beautiful YouTube discovery, Leonard hanging out in a documentary about an old friend from Montreal, the troubled writer Philip Tétrault. The film is another Film Board of Canada production, made by Philip’s brother Pierre, called This Beggar’s Description (2006). Hanging out with Leonard on a park bench is every fan’s dream, and here it is:

I had to opt for just one or two songs to link to, and I will go first for a well-known one, but one that I think is just absolutely perfect lyrically and melodically. (I also love this seriously “unplugged” rendition by Concrete Blonde’s Johnette Napolitano .)

I will end on the song that Leonard himself has pointed to as one that he’s particularly proud of, called “Anthem.” First, some odd live variants that have surfaced on YT, then the best one I found:
—live at the Beacon in NYC, where Leonard lists all the anti-depressants he’s taken, and then says he turned to “a study of the religions and philosophies, but — cheerfulness kept breaking through…”;

—the second-oddest booking he’s ever had (the first was what looked to be a water-park, as seen on a YT vid from a few years back), at Caesar’s Palace in La Vegas, where he comments on the oddness of him being there; and

—in Israel, where he did a benefit for The Parents Circle, a joint Israeli-Palestinian organization (after several interested folks asked him not to play in Israel because of the Israelis' treatment of the Palestinians in Gaza).

Those are the most interesting, but badly video’d versions; here he is, back in his homeland (in Vancouver), in an uncommonly steady and good-sounding fan-vid, wherein he responds to a British critic who says he “is a boring old drone and should go the fuck back to Canada” (he’s cool with the old drone part — again, just imagine Dylan ever being that personable with an audience….). Then, on to the song, which contains the sublime chorus “There is a crack in everything/that’s where the light gets in…”

The talent and humanity are there in spades, but yes, Leonard, it is all about the hat….
Posted by Media Funhouse at 5:20 PM

Great!
I loved the How to read a poem!