Inspired by the example of Arthur Ignatowski and our friend Stephen K.’s cool scan-posts, I thought I’d try to add to the ongoing “library” of articles found on the Net by scanning in some items about a major Funhouse favorite, Tuesday Weld.

Tuesday had two careers: in her first, she was a teenage “sex kitten” on TV and in the movies, but in the late Sixties, she decided she wanted to be a legit actress and carved out a wonderful group of adult performances (see, among others, Play It As It Lays). She remained a very reluctant star performer, however, and was well known for turning down major box-office successes (which were pretty much considered hits-in-the-making as they were being cast) like Bonnie and Clyde and Rosemary’s Baby.

She gave belligerent interviews, appeared in fewer and fewer films, and these days is only seen in the occasional supporting role. But, for a minute or two, let’s return to her starlet phase when she was featured on the covers of magazines, as with this February 1960 edition of “TV Radio Mirror,” where she poses with a pre-plastic surgery Paul Anka. The issue includes profiles of Steve McQueen, Florence Henderson, and Charles Van Doren, in addition to Anka and Tuesday, but I figured we will keep Tuesday on our mind here.

These are scanned on a consumer-grade HP Officejet 5610 all-in-one scanner at 150 dpi (the Klavan/Finch scans below are 100 dpi, which I think is what I'm going with in the future). The files became pretty sizable when I upped the dpi level (about half of the size of last week's Robert Vaughn video file), and I know space on Blogger is limited, so I thought I'd keep the file-size down. If anyone has any (friendly and constructive) advice on scanning old magazine pages, please do feel free to pass it along. I realize the one thing that is missing here is the beloved (by me, at least) smell of old magazine paper.... 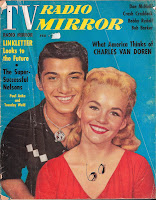 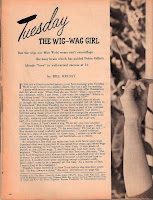 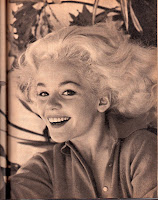 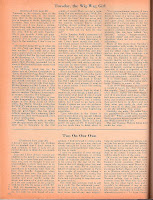 And a bonus pic, a full-page portrait of Ms. Weld from another mag:

Posted by Media Funhouse at 4:59 PM