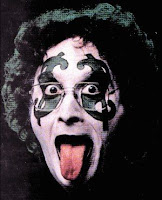 British TV documentaries about the lives of celebrities routinely offer excellent “frames” for their biographies, which often include a portrait of the locale the subject lives/lived in (the Brits are heavy on context, and cities provide the most picturesque sort of context), or an “essay” on the impact the person’s work has had. In the links below, British documentarians tackle two of the most talented singer/songwriters alive, two gents who have always had name recognition but have never had Top 40 singles (except in the case of one “novelty” success….). The subjects are Randy Newman and Leonard Cohen. The Newman docu is a fan’s love-letter to Randy, who acts appropriately cranky and off-handed during the interview segments; the fan in question is Jon Ronson, who wrote the book that inspired the new movie The Men Who Stare at Goats and directed the documentary Stanley Kubrick’s Boxes. The docu, found on the World of Wonder site, is called “I am, unfortunately, Randy Newman”:

Randy can be found here.

The portrait of Leonard Cohen isn’t as blissfully musical as Leonard Cohen: I’m Your Man, but it does supply a good short-form intro to the cult of Leonard and its acolytes (of whom I am one). I recently sat in the nosebleeds at Madison Square Garden to see Len, and he gave one helluva show, offering three hours of solid classics (and the deft handling of a very fine hat).

Leonard can be found here.
Posted by Media Funhouse at 1:56 PM