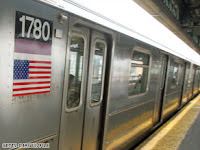 Rather than rail on about the current dire political situation (where stupidity trumps substance each and every time--please god, no McCain), I’ve generally kept my Funhouse rants local, and focused on NYC concerns… like the subway. I am now currently earning dough in an office position that does indeed put me right back in the thick of the rush hour, which I’d been fortunate enough to have been missing for the past few years (come in late, leave late, no fuss, no muss).

Ah, so I’m back in the sardine-can misery that comprises the commuter’s daily journey, with the MTA undergoing what is clearly a slowdown (they recently got a fare hike—it’s time to find reasons to slow the trains down to convince us we “need” them). I have been trapped in two trains so far that could’ve been outrun by a little kid on a tricycle (going a total length of 10 blocks from stop to stop), and have been very disappointed that the list of excuses the conductor used to use for the arbitrary and downright sadistic slowdowns/stops has not been trotted out. As I remember it, the usual wildly ambiguous and carefully-worded-for-obscurity alibis for the fact that train has no intention of going ANYWHERE anytime soon used to run like this:

-“signal lights are holding us”
-“police action”
-“sick passenger”
-“passenger on the tracks” (rare one, everyone wants to see)
-“track work” (this one covers workers on the track—an extremely rare sight—or the fact that they’re rerouting things a few hours before said work begins)
-“train in front of us”

These days, only the last-mentioned is being used (c’mon, guys, imagination, use some imagination while wasting minutes/hours/passages of our lives!). We all of course know what that means—the train left the terminus point too late, the motormen did the three-in-a-row strategy that has worked so well to make NYC buses the utter winter nightmare they are.

So, I’m left wondering: if the all-pervasive excuse is “train traffic in front of us,” why in fact is the S train, which goes merely between Times Square and Grand Central Station (read: one fucking stop), not run on anything approximating a regular schedule? It used to be (yes, even during the nightmare Seventies and Eighties there were indeed small bright spots in the evil MTA’s horrid, wretched empire) that the S train could always be counted on to be at both stops, one filling up at TS and then leaving, the same at GC.

These days two are in service (mind you—there are three tracks for these hunks o’crap) only at rush hour, and the rest of the day, it’ll a good ten-minute wait to get into a crap-train that goes exactly one stop. A fast walker can clearly make the distance in the same time, and be spared the sardine experience.

In Thomas Pynchon’s classic novel V, the proto-beatnik/nihilist character Benny Profane spends his down-days “yo-yo-ing” around NYC, just ridin’ that S shuttle train back and forth, zoning out and checking out who’s going between the two major stations. Benny would long ago have been put in a straitjacket with the functioning of today’s S train (which doesn’t even run 24 hours a day, last I checked).

Yes, NYC sucked in many ways back in the good old bad old days (the charming past), but now in the high-tech, no-possible-reason-why-things-should-fuck-up-except-for-apathy 21st century, it’s much, much worse.
Posted by Media Funhouse at 12:54 PM