“It was long ago/ and it was far away/ And it was so much better than it is today....”: Deceased Artiste Jim Steinman

I have been a big fan of Jim Steinman’s special brand of rock ’n’ roll melodrama for decades. I wrote about this fascination previously on the blog on the occasion of seeing the Toronto production of his life-long passion project, the dystopian teen sci-fi soap opera/Peter Pan mashup Bat Out of Hell. You can read my piece on Steinman and the show here, but I realized that my second blog post about Jim’s amazingly sincere yet overwhelmingly hammy (and I mean that in a complimentary way) Wagnerian pop-rock, focusing on his big European hit musical Tanz Der Vampires, had to be completely rewritten and updated. This was because the better of the two versions of the show that were on YouTube and had English subs was taken down.

The one that was left up is derived from the same original video in German that the “departed” vids was generated from — only in this instance, the poster of the remaining videos decided for some inexplicable reason to change the ratio of the video from “flat” to “widescreen,” thus stretching the damned thing visually. The remaining version is incredibly ugly to watch, but it is the only way to see and understand the full original production if you’re not fluent in German.

In discussing the musical, I focus on an earlier production since it was not only recorded more professionally (when I first wrote this, there was also what looked like a fan-shot full-length video of the show on YT — now gone), but the earlier production was closer to the original vision of the show as personally directed by Roman Polanski, who co-wrote and directed the source material, the horror farce The Fearless Vampire Killers, or Pardon Me, But Your Teeth Are in My Neck (1967). The show began in 1997 in Austria as directed by Polanski, but the subtitled video of it hails from Germany in the early 2000s.

I have mixed feelings about FVR. Polanski’s farces pale beside his brilliant darkly humored pictures (like Bitter Moon). The reworking of the film for Tanz, however, is fascinating in that the stage show takes its characters and situations a bit more seriously — the result, no doubt, of the show running over an hour longer than the film.

The other reason the show is a must-see is that it finds Polanski directing a stage musical scored by the king of pop-rock melodrama, Jim Steinman. As mentioned, I’ve rhapsodized about Steinman before (and noted his difficulties with writing librettos), so I will simply note that, since we never got to see the proposed “video album” for Steinman’s girl-group project “Pandora’s Box” that would’ve been directed by “Unkle Ken” Russell, we can only content ourselves with a Broadway/West End-style musical with Steinman music and Polanski visuals.

As for L’affaire Polanski and the fact that his last two films — Based on a True Story (2017), co-written with Olivier Assayas, and the award-winning (and excellent) J’Accuse (2019) — haven’t come out in the U.S. and won’t for the foreseeable future, it has to be said yet again that one *must* separate the art from the artist or one will only experience art from squeaky-clean hands — and who wants any more Spielberg-Ron Howard-Tom Hanks-Tyler Perry-Marvel movies?

As for his participation in this show, the piece was clearly undertaken with visions of Phantom box office receipts dancing in the producers’ heads. Thus, the budget was clearly large enough to indulge Polanski’s gothic impulses. (As for his stage credentials, he did take time out from the cinema to costar and direct productions of Amadeus in ’81 and ’99 in Warsaw, Paris, and Milan.)

The sets are large and the cast is filled with “background vampire” singers and dancers. The key ingredient, though, is Steinman’s music, which, true to form with Jim, consists of songs that he composed for earlier projects, both musicals and pop-rock albums.

The most-heard tune in the piece is “Total Eclipse of the Heart,” which is the central vampire’s signature theme and is repeated over and over in the show. Steinman has been quoted as saying that he used the very well-known hit song as a kind of place holder for some other song to be written later. Given that the tune is the central piece of music, I doubt he threw the song in there provisionally.

There is certainly something amazing about hearing Steinman’s Wagnerian pop-rock in German. For decades now he has crafted songs that require singers with “big” voices and a solid vocal range (well… maybe not Air Supply), and his aim was always to write Broadway musicals. Hearing his music in German is a hand-in-glove fit.

Tanz was his first big-budgeted musical to become a hit (it has run in various permutations in Germany over the past 20 years). That’s a chronological distinction, since an earlier collaboration with Andrew Lloyd Webber, Whistle Down the Wind, flopped in the U.S. in ’96 but ran for several years in the West End, starting in ’98, a year after Tanz opened in Austria. Steinman’s long-gestating dystopian sci-fi/Peter Pan musical, Bat Out of Hell (which I, yet again, reviewed here), toured around the UK (where it did very well) and North America and only played in NYC as a limited edition run (where that show was cut as well, but nothing new was inserted — the plot was streamlined and songs were removed). 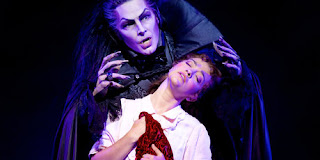 One other individual should very definitely be highlighted here. Michael Kunze wrote the libretto adapting Polanski’s film to the stage. He also wrote the German lyrics, which confirm the show’s status as an “almost operetta,” since the dialogue is minimal and the songs drive the plot entirely. Kunze has written German lyrics for many British and American shows, has had a number of his own hit musicals in Germany, and wrote and produced the disco hit “Fly, Robin, Fly” by Silver Convention (!).

It should be noted that the very short-lived American version of the show starring Michael (“Phantom”!) Crawford had a troubled production and ultimately flopped big-time on Broadway. Steinman was initially hired as co-director, then fired, and he has never spoken well of the show, titled (rather obviously) Dance of the Vampires. By the time of the American failure, Polanski was long gone from the project.

So here is all of Tanz from its German incarnation. The YT poster has broken it into six segments, each of which has its standout scenes and songs. Note: The English lyrics seen here are completely different from the other set of English lyrics that were posted in the “square” (correct-looking) version of the video. I have no grasp of German, so I can’t tell who did a better job of translation. (I did keep .mp4 copies of the other person’s better-looking videos.)

The first part has an amazing paean to garlic (tongue in cheek, of course) and the first appearance of “Total Eclipse” as the vampire’s signature song. It ends with a very Gilbert and Sullivan-esque song sung by the professor character (played in Fearless Vampire Killers by Jack MacGowran).

The second part has the first big duet between the youthful sidekick of the professor and the daughter of the innkeeper (played in the film by Polanski and Sharon Tate).

The third part leads up to the famed “Jewish vampire” scene, which explains why one character looks like he’s Fagin or a Semitic stereotype. The initial scenes are set in a shtetl, and Polanski and his original co-scipter Gerard Brach provided a nice comedic pay-off to go with that choice of location.

The fourth part, which begins Act Two, starts off with a full performance of “Total Eclipse” and the bravura vampiric nighttime fantasy “Seize the Night.” (A title so good I’d like to attribute it to Steinman, but it surely was Kunze’s contribution.)

The fifth part contains another big ensemble number — “Eternity,” performed by a host of vampires after they exit their coffins.

The sixth part is the finale (bows included), leading up to the big closing number, “Dance of the Vampires.” The song is really “Tonight Is What It Means to Be Young,” an incredibly rousing Steinman song from the Walter Hill film Streets of Fire (1984). It’s a great way to end the show — kinda like Rocky Horror, but as if “Time Warp” was the finale.

So there you have it — the entirety of Steinman’s “lost” (in America at least) gothic vampire musical as scripted/with lyrics by Michael Kunze and directed by none other than Roman Polanski. It’s a shame that the YouTube poster did indeed alter the image so the video looks dreadful all the way through, but perhaps that was the only way to keep it from being taken down? (Since YT’s rules are arbitrary, whimsical, capricious, and absolutely without rhyme or reason. It’s a video-viewing site run by robots that pretends it’s the creation of people.)

As a closer I want to add some items that were not in the preceding posts about Steinman. Three are from his only album, Bad for Good (1981), which is an odd affair — made up of songs that would’ve been on the sequel to Bat Out of Hell that never materialized because of Meatloaf losing his voice (although he used these songs and other Steinman tunes for both Bats 2 and 3). Steinman also doesn’t sing on some of the tracks — the one hit from the album, “Rock and Roll Dreams Come Through,” was sung by session singer Rory Dodd.

Here, Steinman delivers a Jim Morrison-esque spoken-word piece, “Love and Death and an American Guitar” (although Jim S. was kidding — or at least half-kidding). He had started doing this monologue at Meat Loaf live shows and later re-used it for the EPK of the Original Sin album he wrote and produced for his attempt at a prefab girl group, Pandora’s Box.

The album’s title song, “Bad for Good,” is a classic Steinman tune, with full-blown rock-drama in effect. (And quite corny interpretive dancing in the music-vid.)

The last video from his album is not found on YouTube (no reason why, really) but can be found on Vimeo. He often referred in interviews to the “boner moments” in his songs, where he indicated that the male narrator was getting crazy over his object of desire. Here, Jim not only sings (lip-synch of course) with the ever-lovely Karla De Vito (who took over for Ellen Foley and toured with Meat Loaf, performing back-up vocals and duets from the first Bat LP) — he also dances. (Or something resembling dancing.) This is his silliest epic song (and intended to be so):

I can’t resist closing another tribute to Steinman with the Holy Grail of the music-videos for his songs. No, not “Total Eclipse of the Heart.” This video for a song Jim wrote and produced in 1989 for his girl-group Pandora’s Box (but which became a giant hit for Celine Dion several years later) is directed by none other than Funhouse interview subject Ken Russell.

It is the union of a filmmaker who often went deliriously, deliciously over the top and a songwriter who stayed in that register all the time. (Jim’s oft-stated heroes were Richard Wagner and Little Richard, and clearly many tragic story-songs of the early Sixties.) The video finds “Unkle Ken” (as he liked to be called in his later years) repeating a plot he developed for his contribution to the anthology film Aria (1987), and in the process producing frenzied, stylized visuals that perfectly match Steinman’s words and music.

The singer, for the record, is Elaine Caswell. And this is a mega-blast of Steinman (and Russell) grandiosity.

Posted by Media Funhouse at 3:04 AM