Some Notes on Pre-code Horror: the end approaches… (Part 2 of three)

I rejoin this piece where we left off, at the end of 1932. The pre-code period chronologically ended on July 1, 1934, but, as we shall see in this installment (and the next), the deviant behavior and lurid storylines continued for several months after that date.

The Vampire Bat, 1933, Majestic Pictures, Frank R. Strayer (released Jan '33) Lionel Atwill and Fay Wray proved a good (and economical) team, so they appeared in two more horror films together in the year following Doctor X (see Part 1 of this piece).
Mystery of the Wax Museum was the prestige item, made by Warner Bros. But the “poverty row” studios were keen to steal the luster of the majors, and so The Vampire Bat was produced and rushed out by Majestic Pictures before Museum. It stars Atwill, Wray, and Universal’s mad scientist sidekick supreme, Dwight Frye. 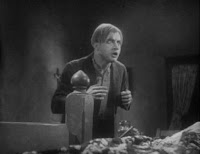 The film is meager stuff, with only Frye’s unhinged performance as a mentally disabled villager qualifying as memorable. The plot involves a series of “vampiric” murders that are pinned on bat-hoarder Frye, who is, as could be expected, a red herring.

Atwill gets some good freakout moments in the third act, but this is the one pre-code horror movie that I do not recommend (unless you’re a Frye fanatic).

Mystery of the Wax Museum, 1933, Warner Bros, Michael Curtiz (Feb '33) The second and last pre-code color horror picture isn’t as well-known as its 3-D 1953 remake, House of Wax, but it should be. It’s a delightfully schizo affair that is both a cool and creepy horror thriller and a newspaper picture with scenes modelled after the ultimate newspaper comedy, The Front Page (although the closing scene foreshadows the famous remake of that film, His Girl Friday). 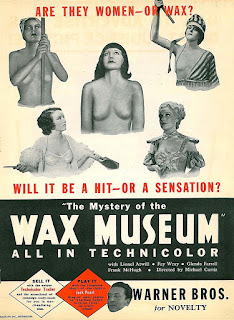 Glenda Farrell plays a “girl reporter” who lives in the Warner Bros world where everyone speaks a mile a minute — which is a great way to frame these horror movies, since it speeds up the always untenable “young lovers” plot line. Farrell is a “hard-berled” dame who greets one cop at the police station with the query, “How’s yer sex life?” (The pre-code world includes elements you wouldn’t hear/see onscreen again until the late Sixties.) 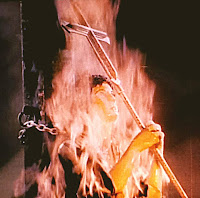 Farrell’s sequences and those that feature the young lovers — the girl in the couple (Fay Wray) is Farrell’s roommate and the boy is a sculptor in wax — proceed at one pace, and the scenes that focus on crazed wax sculptor Lionel Atwill are slower and menacing, creating a wonderfully weird counterpoint between the two “moods.”

The women in the film are fascinating — in addition to fast-talking, take-no-guff Farrell, there is Fay Wray as her roommate, a young lovely whom Atwill wants to “sculpt” for his wax museum. The other haunting face in the film belongs to Monica Bannister (see image up top), who worked most prominently in Busby Berkeley musicals as a chorine. She plays a murder victim whose corpse is dressed as Joan of Arc by Atwill.

If that last statement made no sense, you obviously have never seen House of Wax (or its several remakes and ripoffs). Atwill’s character (later played by Vincent Price) is a sculptor whose initial wax museum is destroyed in a fire. He then creates a second one but, due to his hands having been injured, he takes the easy way out and simply uses wax-covered corpses in his tableaux. He is a Phantom of the Opera-like disfigured murderer who also has a public “face” (a mask) that allows him to appear normal (or a decent simulacrum of same). 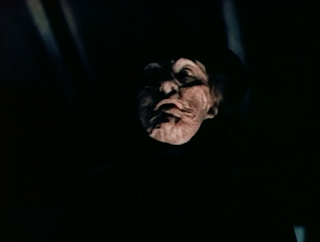 Director Curtiz might not have been Howard Hawks — who made a masterpiece in nearly every genre — but he was indeed an eclectic director who made vastly different, memorable pictures. Curtiz and company hit on a brilliant solution for the problem of wax sculptures melting under the hot lights required to shoot in two-color Technicolor. Actors played the wax statues, and so Atwill’s museum is extremely creepy, since we can see that the figures are indeed real people. Sometimes convenience supplies the best solutions.

The Invisible Man, 1933, Universal, James Whale (Nov '33) One of the more unusual horror movies of the pre-code era, this H.G. Wells adaptation blended fantasy, suspense, and humor while also giving the screen the last new monster of the pre-code era (the next new monster was the Wolf Man, who debuted in The Werewolf of London in 1935 but was refined in the 1941 The Wolf Man).

James Whale, who was allowed to go as far as he wanted by Universal Pictures given the enormous success of Frankenstein, crafted a horror picture that is by turns suspenseful and ridiculous. Invisible Man in fact offers a rough draft for the masterpiece Bride of Frankenstein, which he served up two years later (and which also featured the tiring character actress Una O’Connor as another shouty lady).

In his first movie role in the U.S., Claude Rains gave a consummately deranged performance, while wrapped up in bandages and sunglasses (and black velvet, for his undressing scenes). Rains excelled in every role he was given (from taut dramas to mawkish tearjerkers), but scientist Dr. Jack Griffin is an early high point, as the part allowed him to run a gamut of emotions, from stolid, Nietzschean frenzy to prankish glee.

Rains’ craggy, smoky voice was a beautiful instrument, matched in our era only by the late John Hurt’s equally smoky tones. Here he gets ample time to intone the “mad scientist as rival to God” dialogue with a great deal of relish. He declares to his colleague/rival: “We’ll begin with a reign of terror. A few murders here and there — murders of great men, murders of little men, just to show we make no distinction.”

He later boasts he has the “power to make multitudes run squealing in terror, at the touch of my little invisible finger…. Even the moon’s frightened of me, frightened to death!” 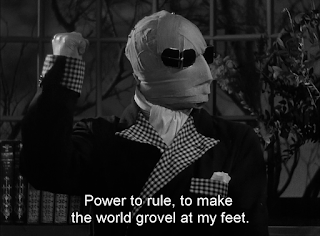 Mad Love, 1935, MGM, Karl Freund (July '35) American horror films of the Thirties had a sizeable number of German and British emigres both in front of and behind the camera. Mad Love was the second and last horror film directed by master cameraman Freund, and it starred Peter Lorre in his first role in the U.S. (his second in English, after Hitchcock’s original The Man Who Knew Too Much). Lorre had already given his career-making performance in Lang’s M (1931), but here he becomes the “American Lorre” — devious, contemptuous, and on the verge of a nervous breakdown.

The film was released after the Production Code had already gone into effect (in mid-1934) but, as we shall see in the third part of this piece, certain horror films got away with deviant plot elements until 1935-’36.

Mad Love contains fetishism (as Mrs. Orlac, Frances Drake stars in a “Theatre des horreurs” show in which she is tortured onstage), medical aberrations (a hand transplant), and just plain weirdness (a scene where Lorre disguises himself as a “headless” dead man, replete with metallic hands). 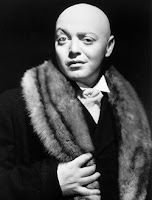 The plot of the silent 1924 film Hands of Orlac — directed by Robert Wiene and based on Maurice Renard’s novel of the same title — was flipped here, so that the doctor is the one having the freak-out, rather than the recipient of the hand transplant.

The reason the film is so impressively menacing (and wonderfully crazy) is because of the talent assembled: Lorre, Colin Clive (as Orlac), John Balderston (who scripted Dracula and a number of other pre-code monster classics), and up-and-coming cinematographer Gregg Toland (whom Pauline Kael maintained reused shots from Mad Love in Citizen Kane; this is not exactly true, but Welles did often say that Kane was as good as it was because of Toland).

Proving that best movies are always part of a continuum, it should be noted that Freund uses a trick from Mystery of the Wax Museum, namely using a live actor to play a wax statue. Lorre’s character purchases a wax mannequin of Mrs. Orlac. When the mannequin is seen in a long shot, it is a dummy, but when it is viewed from the front in a medium shot, it’s played by Frances Drake. This blending of the real and artificial anticipates a creepy moment in Bava’s Lisa and the Devil (1973), where Telly Savalas is holding a mannequin that is replaced by a live actor in the countershots. 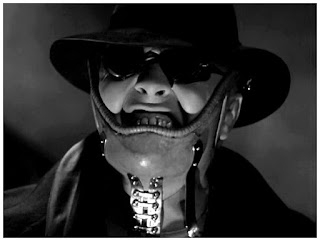 Note: I left The Mask of Fu Manchu and The Most Dangerous Game out of this piece because they are essentially thrillers and not horror films (although both are incredibly entertaining). The Ghoul with Karloff was left out because it was made in England (and is incredibly derivative of both The Mummy and The Old Dark House). King Kong, to me, is a fantasy film, not a horror movie. The final part of this piece will deal with the three masterpieces from this era….
Posted by Media Funhouse at 5:07 PM