Unseen photos from the “maverick” era in Hollywood: The Edit Room Floor blog

It’d be impossible to count the number of movie-related websites that are currently in existence. On the Funhouse TV show, I frequently liken the Internet to that wood where trees are falling and no one is hearing the sound. The sound in this instance is that of historians, experts, and super-fans sharing their knowledge and personal collections for free.

Such is the case with the Edit Room Floor blog, run by Jordan Krug, an editor who lives in Toronto. Krug collects contact sheets of photos taken on the sets of his favorite movies. Lucky for us, he has excellent taste. 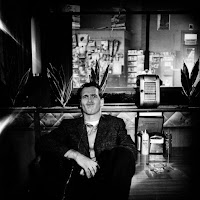 Although the films from which he provides unseen images range chronologically from The Hustler (1961) to Blade Runner (1982), my fascination with his blog is that the lion’s share of his rarities are from the “maverick” era of American film — borrowing a phrase from the comic book world, one could easily deem it “the Silver Age” of American filmmaking.

The specific purpose of Krug’s blog is to present on-set photos and explore deleted scenes from these films. He offers up images from the lost sequences and supplements those with the appropriate pages from the original scripts and anecdotes from biographies and autobiographies of those involved. In a few cases he even “animated” shots from lost scenes to provide the best possible approximation of what the lost scene looked like in motion.

Jordan has so far put up 61 entries on his blog, starting in 2012 and ending in 2014. I hope he has more rarities hiding up his sleeve, but as it stands the blog is still a wonderful source of new information about films that many of us have seen several times (and/or memorized, depending on our level of devotion). 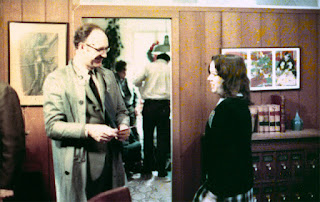 Given the fact that so many restorations are being done at the moment, Krug refers to many of the images on his blog as “rarely seen” photos. In some cases it’s evident that, aside from the filmmakers themselves and other massive fans of the films (who are not wanting to share, as Jordan is doing), these images truly have gone unseen.

Thus we are treated to some wonderful on-set shots from a variety of cult favorites. The first category comprises films that fit handily into the “macho hero” category: Cool Hand Luke (1967), Prime Cut (1972), and The Cowboys (also ’72). 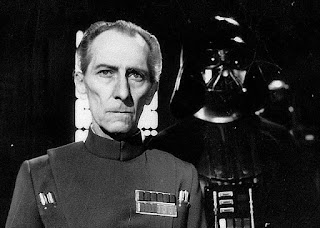 The second category of titles that Jordan provides rare images from are box office blockbusters. He spotlights Rocky (1976) (which was a terrific film — ignoring the crap sequels that it inspired) and the juggernaut Star Wars (1977). I have no interest in the latter but any rare images of Peter Cushing are fine by me.

The final group of films that Jordan dotes on are unmitigated masterpieces, in mine ‘umble opinion. The first is Leone’s The Good, the Bad and the Ugly (1966). Jordan shares with us rare shots of the final shootout in the cemetery.

With Blade Runner, we are treated to shots from the last night of shooting, in which Deckard hangs from the ledge in the rain.

One of the linchpins of modern American cinema (from an era that now seems like it was a million years ago, not only in terms of the quality of filmmaking but as for the emotional attachment of its maker), Taxi Driver (1976) is represented through rarely seen shots from the famous mirror sequence and the “Scar scene” (labelled as such by Scorsese and Schrader, who felt that The Searchers lacked a scene in which Natalie Wood's allegiance to her Indian captor was explained), in which we see Iris and Sport (Harvey Keitel) as a couple in love. Also, Iris initially walking down the street with Travis. 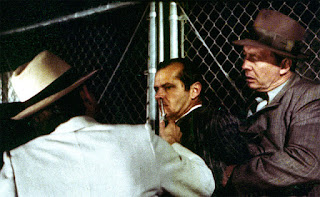 Polanski’s masterwork Chinatown (1974) is represented by a wonderful array of color on-set photos. Included are moments from the sequence in which Jake has his nose cut by a mean little gangster (Polanski himself), as well an intimate moment between Jake and Evelyn. Also, images from a scene entirely cut from the film in which Jake drives by a “rainmaker” who is plying his trade.

The two films that receive the most in-depth treatment on the Edit Room Floor blog are John Boorman’s Point Blank (1967) and Coppola’s The Conversation (1974). Boorman’s film is represented by nine (!) separate blog entries in which Krug offers unseen images from the set and scenes that were trimmed or cut from the film.

Included are Walker walking in LAX, the sequences in Alcatraz, the death of Reese (John Vernon) and Walker being beaten up by Chris (Angie Dickinson). Not only that, but we are offered groovy pics of the wrap party, in which we see Lee Marvin palling around with Steve McQueen, Warren Oates, Charles Bronson, Burt Reynolds and other Hollywood tough-guys. 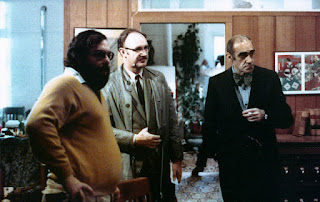 For me, there are several must-see blog entries on the Edit Room Floor, but Krug's many posts on The Conversation are his most valuable contribution to the online appreciation of the “maverick” era. He provides all available materials on the many deleted scenes he has images from, noting at the outset that Coppola left the film in the hands of his editor Walter Murch when he (Coppola) began to work on The Godfather Part II. Thus Murch had to cut a four-and-a-half hour film down to the two-hour mark.

The missing sequences covered by Krug include Harry Caul's visit to the apartment vacated by his mistress, more of the convention sequence, and several scenes that were easily cut because they provided Caul with friends and relatives, which would've mitigated the intensely lonely aspect of the finished film.

It turns out that the sequences that were shot but taken out of the film (and then sadly lost, meaning that these on-set photos and the original script are the only traces of these moments) included Harry receiving birthday wishes (and a cake!) from his neighbors, a subplot in which the neighbors were furious at their landlord (who we learn is Harry himself), and a subsequent visit Harry makes to his lawyer's office.

The latter was initially so important to Coppola that he shot it twice, with Abe Vigoda playing the lawyer in the first version, and a young Mackenzie Phillips showing up as Harry's parochial school student niece (who winds up awkwardly telling him about her first time with a boy).


As I noted above, I hope Jordan has time to share more with us on the Edit Room Floor blog. In the meantime, he has already shared quite a lot and put some cult classics into a new light by providing a look at missing scenes and the on-set environment of the films. From one “tree falling in the forest” to another, I salute his efforts....
Posted by Media Funhouse at 11:42 PM

Way, way back, I was directing Tomorrow's Television Tonight and the guests were actors from Once Upon A Time in America which had just wrapped filming. The studio sent a pile of publicity shots which included stills from at least one deleted scene in a funeral home. Not sure if the restored version has that particular one or not.

Right now I am working on a documentary about the production of Harold Lloyd's "Speedy" in NYC. We have a bunch of stills from deleted (and now lost) scenes as Lloyd was merciless with gags that didn't get the right response on his "Laff-O-Graph" machine. It was a sort of seismograph-like device that was hooked up to microphones at test screenings.