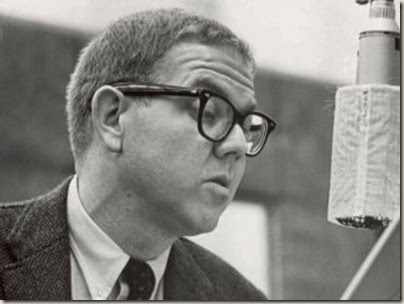 Comedy fans “of a certain age” are in mourning today because the last of the great novelty record masters is gone. Stan Freberg, who died yesterday at 88, had a career that could've only existed in the Fifties. Freberg is best known for two things: a series of comedy singles that were essentially pieces of radio comedy retooled for the shorter, tighter 45 format; and a series of TV ads that were bold, brash, self-referential, silly, and yet still hyped the products in question.

There will no doubt be many encomiums thrown Stan's way, and rightly so. I just wanted to focus in on the moment at which John Lennon appropriated one of Stan's old ideas and turned it into an avant-garde “experiment.”

Firstly, Freberg talking about his interactions with John and Yoko on talk shows. When he came on Dick Cavett's ABC show, he was informed that he would be on an episode that contained the remainder of an interview with John and Yoko, and he noted that that same thing had happened when he'd been on David Frost's show in London:

The fact that Lennon knew who Freberg was and wanted to meet him makes perfect sense, as John was a Spike Milligan cultist who counted master-humorists Peter Cook and Viv Stanshall (gents he inspired and whom I would argue inspired him greatly) among his friends in mid-Sixties Swinging London. 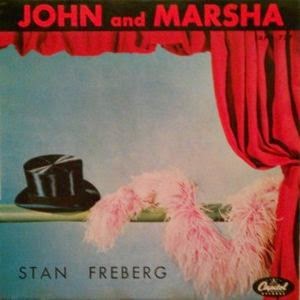 John most certainly knew Stan's popular singles, and one in particular, called “John and Marsha,” in which two voices (Freberg as both John and Marsha) act out a full soap opera in two and a half minutes by just saying each other's names in different ways.

Yoko Ono has been accused by commentators like Camille Paglia of having taken away John's sense of humor, a notion that is patently untrue. Well, on further thought, it did occasionally seem like it was true — not in the political moments so much as the avant-garde experimental mode where the “Joko” team created music, films, and epigrammatic poetry that seemed to be ripe for satire.

Their three LPs together, the Unfinished Music duo and Wedding Album, are works executed in this mode. I am a devoted Lennon fan, but even in my most diehard period of Beatle worship, I knew I would listen one time and one time only to each of these LPs, so I stopped even trying to acquire them (after finding an inexpensively priced copy of Two Virgins, playing it once, and realizing that the old nasty “play the album cover and throw the album away” review wasn't far from wrong). 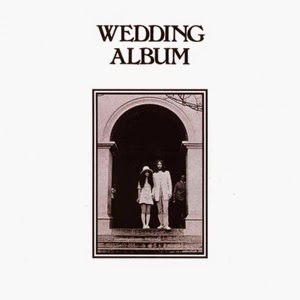 On the 1969 LP Wedding Album, which was more of a commemorative package of the Lennons' wedding (a box filled with various artifacts, including a photo of wedding cake) than any kind of actually doted-on album, John (or Yoko, or both, or some engineer they supervised) assembled an audio collage of Lennon-Ono interviews for the second side of the album.

The first side, however, contained a specially recorded item, “John and Yoko,” a 22-minute experiment in which the Lennons said each other's names over and over in different tones while a recording of their heartbeats was heard throbbin' away. The piece does start out as a joke, with John and Yoko goofing around, but at various points they do try to reign it in and pretend they're having sex or nuzzling each other, or “losing” each other. In other words, they try to be serious, while “appropriating” (let's be kind) a concept that Freberg did at one-eleventh the length as a purely comic notion.

It is mighty silly, and you will most likely never listen to it more than once, but now, thanks to the wonder that is YouTube, we can readily summon up both Stan's original and John and Yoko's “variation on a theme.” The Freberg name appears nowhere in the album's credits (then again, this is around the time that John unconsciously transformed Chuck Berry's “You Can't Catch Me” into “Come Together”), but John did say that they recorded it as “an extended, very extreme version of 'John and Marsha' that was out years ago by Stan Freberg.”

He also said, “It also really makes your hair stand on end.” The latter makes it appear that, yes, they weren't totally fooling around with this album side-long riff on a two-and-a-half-minute novelty record. Perhaps it isn't as Paglia believes, that Yoko was neutering John's sense of humor — perhaps it was just the drugs....

As a bonus, I will note that I am proud to have featured Stan's Chun King-sponsored Chinese New Year special from 1962 on the Funhouse TV show (and will probably rerun that episode soon) more than once. I was unaware that he made another, somewhat similar, special in 1980.

Stan's “Federal Budget Revue” was a PBS special in which he talked, sang, and danced about government expenditures. Freberg lives up to his appearance here (he had the look of a Fifties “egghead” smart-guy), but the best part of the show, as was always the case with Stan, are his musical numbers, arranged by the great Billy May. The whole half-hour show can be seen here:

Whatta head of hair that guy had! And what a mind underneath it.
Posted by Media Funhouse at 8:12 AM

A hall hour special about a 600 billion dollar budget? If Freberg made a special about the federal budget now it would have to be a mini-series.