He'll always be 'Chuckles' to me: Deceased Artiste Gene Saks 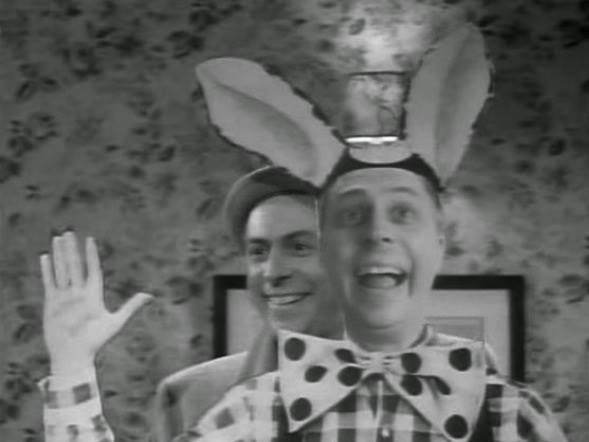 I don't want to make my tribute to Gene Saks an echo of my goodbye piece to Mike Nichols, but since he achieved his greatest fame as a director of comic plays (and was also associated with Neil Simon), let me run quickly through a few of the same points. The first and most important is that, while in film the director is truly the “auteur,” onstage (and most definitely in the kinds of plays that Saks and Nichols directed), the playwright is everything. And what he/she isn't, the performers are.

I'm not the biggest fan of Saks as a movie director – he made eight films, a few of which were very funny, but all of which had no discernible style. As was the case with Nichols, though, I absolutely loved Saks to pieces as a performer. To return to his direction for a bit, I will note that, it is said that Saks did his finest work as a director for the Broadway stage.

I saw only three productions of Neil Simon plays he staged (and the last one was reworked by another director). I found the first one mesmerizing, because it was the very first Broadway play I saw as a child, California Suite. (So the experience was more memorable than the play itself.)

I have the feeling I wouldn't find it as mesmerizing these days (and the other, Jake's Women, was somewhat torturous). Neil Simon, the undisputed king (in terms of success) of Broadway comic playwrights, had certain rhythms to his work. His plays of the Sixties and early Seventies are wonderfully charming and have some delightful situations and characters – they are prime meat for good performers to make hay with and steal a scene. Thus the key to directing his work, and in my mind the key to theatrical direction, is working very closely and sympathetically with the actors (the visuals are the turf of the set designer; the action is purely the playwright's domain).

Simon's plays are, to my mind, director-proof; it didn't matter which director supervised them onstage, they would've turned out pretty much the same (assuming the director had any innate talent and could make the wise casting decisions that make or break a B'way hit).

There was an overt sentimentality that plagued Simon's later works. He wanted to convey something *important*, goddammit! For me, The Prisoner of Second Avenue is his masterpiece (first staged in 1971, during the thick of his most productive period in NYC). It is one of his few pieces where the emotion flows beautifully and not artificially. It also doesn't "date," since a good deal of its plot is about the middle-aged protagonist's struggle to find work after being laid off.

I noted in my obit for Nichols that, if I wasn't aware of which film director made which picture, I would find it hard to distinguish between the work of Saks, Nichols, Arthur Hiller, and Herbert Ross – I should add Melvin Frank here, because he is the one who directed the film of Prisoner in 1975. 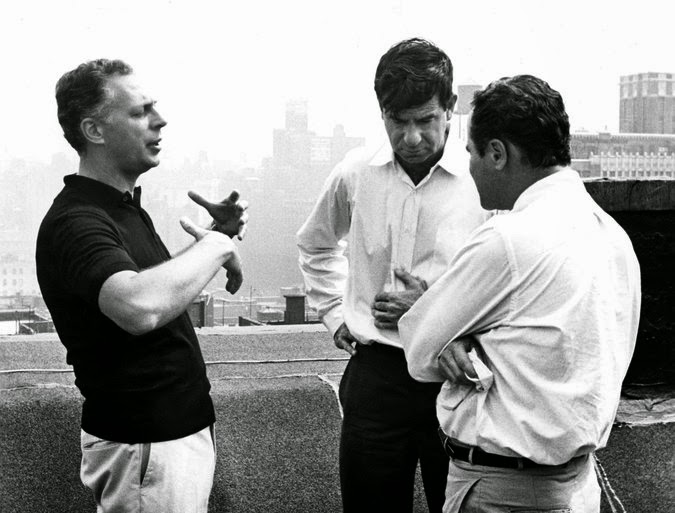 I recently rewatched The Odd Couple (1968) and Last of the Red Hot Lovers (1972), both directed by Saks. Both films contain funny dialogue and situations, and both star supremely talented comic actors. Any one of the directors mentioned above (or several others who made similar films in the Sixties and Seventies) could've made them and they would've been pretty much identical.

My experience seeing Saks' movie Mame (1974) as a small kid was memorable as well, in that it alienated my mother (who loves movie musicals to pieces). It is painfully rendered – most likely due to the fact that Lucille Ball's ego outshone everything else involved in the production (and every single close-up of her is seen through a lens caked with Vaseline).
*****

So let me now rhapsodize about Saks the performer. He began in show business as an actor, but he appeared in less than a dozen roles on TV and in film after his directing career took off. To illustrate the point that it ain't how much you do but how well you do it (think of Laughton and his one work as a filmmaker), Saks was a tremendous scene-stealer as a movie performer. He was offered the supporting role of Jack Lemmon's brother in the film version of Prisoner of Second Avenue (1975) and is just beautiful as the less-loved sibling who, in the end, is the only one who really cares about our neurotic hero besides his wife.

While Neil Simon was the most successful comic playwright of the Sixties and Seventies and did some truly wonderful work, for me Herb Gardner remains the true master (with Murray Schisgal coming up close behind). And, in Gardner's work, there was no better scene-stealer than Gene Saks.

Thus, while Saks acquired a sterling reputation as a comedy director on B'way (and, to a lesser extent, in the movies), for those who have seen and loved A Thousand Clowns (1965), he will forever be known as Leo Herman, aka “Chuckles the Chipmunk,” the former employer of Murray Burns (Jason Robards). Chuckles is a hyperactive kiddie-show host who gets nervous around children. 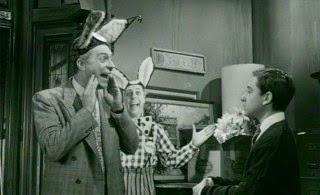 Gardner spoke at the Film Forum in NYC in the Nineties and decided to reveal where the character of Chuckles came from. He told us how he had once worked for Bob Keeshan, alias Captain Kangaroo, and that Bob was incredibly nervous around children (he also mentioned that the Captain kept flasks in those big pockets).

This was one way in which the character of Murray was based on Gardner himself – I asked Gardner at a book signing if Murray was based on Jean Shepherd, and he said that Jean believed that but it wasn't so. Murray, Gardner said, was based on his own bachelor life and behavior. (Attention Shep biographer Eugene Bergmann and others who have repeated Jean's accusation!)

The way Saks plays him, Chuckles is nothing like Capt. Kangaroo, but we've all met people like him – a well-meaning but dense guy in a position of power who claims he's looking for something better to do with his life, but in the meantime keeps doing the mediocre stuff. Saks literally does steal the show away from Robards for awhile (which is amazing, given how wonderful Robards is throughout the picture).

Another thing Gardner revealed at the Film Forum: Saks was the first choice for the role but was unavailable. They shot the Chuckles sequence with another actor and it wasn't working. Saks somehow found the time, and so they reshot the scene, but only the angles that involved Chuckles on his own, or he and Murray or Nick (Barry Gordon). Thus, the cardboard cutout of Chuckles changes from shot to shot – when it's seen clearly it's Saks, but when it's in long shot you can see another face. [UPDATE: Fellow Gardner-fan and all-around comedy expert/aficionado Bob Claster has uncovered the identity of the original Chuckles, whose face is seen on the cutout in long shots: character actor Paul Richards. Thanks much, Bob!]

Saks is killer in the part (“You're an old monkey, aren't you, huh?”), and makes a great film even greater. Below is the whole film, but you can go straight to Saks' scene here.

Saks did the scene-stealing honors in Gardner's film of his play The Goodbye People (1984). I featured scenes from the film a few months back on the Funhouse TV show (where I'm always showing stuff you ain't seein' anyplace else!), because it has pretty much been forgotten. No DVD release, no bootlegs, a friend noted it isn't even haunting the darkest depths of the Bit Torrents, where much of cinema history is tucked away.

The Goodbye People was clearly a labor of love for Gardner, because he kept mounting the play over and over again, and it kept failing. It's a classic Herb Gardner tale of the struggle for nonconformity: a boisterous old man (Martin Balsam) who has been having health trouble wants to resurrect his old hot dog stand on the Coney Island boardwalk in the middle of the cold season. He lures a nervous dreamer (Judd Hirsch) into his plan, as well as his daughter (Pamela Reed).

Gardner directed it when it bowed on Broadway in Dec. 1968 with Bob Dishy as the dreamer, Brenda Vaccaro as the daughter, and Milton Berle (!) as the old man. The play failed then, but he got it restaged in L.A. in 1979 (directed by Jeff Bleckner) with Peter Bonerz as the dreamer, Patty Duke Astin as the daughter, and Herschel Bernardi as the old man. It hit B'way again in '79 with Ron Rifkin, Melanie Mayron, and Bernardi in the leads.

Elaine May intro'd The Goodbye People in the book Herb Gardner: The Collected Plays, noting that she directed Gardner's rewritten version of the play (he clearly never did give up on it!) as it debuted in Stockbridge, Massachusetts (presumably pre-B'way in '79). She listed the cast as Gabe Dell, the great Zohra Lampert, and Gene Saks – one assumes he played the old man in this instance.

From May's intro: "It is a quintessential play about America, about discounting the odds, about having hope without evidence, about the refusal to accept old age or anything else without an argument, about thumbing your nose at death with dignity and, in fact, thumbing your nose at dignity. It is about the tough, unregenerate, screw-you exhilaration of the old West, still alive and doing business in Coney Island."

In the film Gardner cast Saks as the old man's business partner who has sold out his interest in the hot dog stand to a big chain (the role had been played by the same actor, Sammy Smith, in both B'way productions and the '79 L.A. run). Saks winds up stealing the picture again, this time with an even shorter appearance than he had in A Thousand Clowns.

His character, Marcus Soloway, delivers a monologue on how he's happy being an old man, a speech that I should note Gardner wrote when he was in his early 30s. I uploaded this scene to YouTube myself (and, yes, it came from a VHS prerecord!) because I wanted to share Saks scene-stealing magic – and Gardner's truly sublime writing.

Posted by Media Funhouse at 1:34 PM

Ed: Excellent analysis per usual. I am obsessed with Saks' work on the film version of The Odd Couple, as you perhaps have surmised by this time. Amazingly, I do not believe that I have ever seen A Thousand Clowns! I shall rectify this as soon as the TCM gods make this possible. Just as long as The Odd Couple isn't simultaneously playing on another station, that is. Incidentally, I happened to see Jake's Women during my first visit to New York, in 1992.