Both sides of Shel Silverstein

The enigma of Shel Silverstein remains intact: he’s best remembered as a kiddie-book author, but most of his career was spent writing songs, articles, plays, and books meant for adults. The songs ranged from sentimental country tunes and all-out rockers to memorably humorous ditties that can’t be forgotten. A fair portion of his adult creations could be labelled “dirty” by those who consider themselves moral arbiters (you know, the kind of American who is afraid of the human body and honesty about sexual relations).

Shel performed publicly early on in his career, but later on he rarely appeared onstage and he rarely consented to interviews. He valued his privacy (and also loathed explaining his kiddie books, according to the biography A Boy Named Shel), but he also had to keep his two “lives” separate — it wouldn’t be good for the sales of his children’s book sales if he was asked interview questions about his “dirty” songs and stories.

Thus, there is very little footage of Shel performing. But some does exist – that has been the sheer joy of the veritable flood of clips that have been uploaded to YouTube, discovering video and film footage of performers who either were rarely filmed at all or who appeared on programs that seem to have disappeared into thin air (read: been “wiped” by the networks). Lord Buckley and Tom Lehrer are two very good examples of this.

But now several clips of Shel on TV have shown up on YT. The first one to watch is his only guest appearance on a prime-time network variety show, singing and chatting with the host on The Johnny Cash Show. The Man in Black remains the only person who publicly asked Shel about his two identities.

They also duet on the last few verses of “A Boy Named Sue” and Shel then performs a serious song, “Daddy What If?”

One of Shel's best-known works for children is, of course, The Giving Tree. Shel didn't like to explain what the story was about, but everyone has their own interpretation of it. Some have said it's a tale of man exploiting his environment, others have said it's clearly a metaphor about a child and a parent. My parents attended a Catholic school gathering where it was read and the nun in attendance said it was about man and god.

Whatever it means, here's the man himself narrating it for a 1973 film:


It was obvious that Shel liked children, especially the way they thought. However, I *don't* think he enjoyed encountering them in big groups. He seems very uncomfortable here, performing “Boa Constrictor,” “Sarah Cynthia Sylvia Stout,” and “The Unicorn” surrounded by a group of feisty moppets. I'm not sure where this clip comes from, but this poster is a massive Dr. Hook and the Medicine Show fan, so it's possible it came from one of their TV specials.

It's hard to pick Shel's best “adult” work, but I would vote for his epic poem “The Devil and Billy Markham,” which appeared in Playboy in January of 1979 and later became an incredible performance piece recited by Dr. Hook's great vocalist Dennis Locorriere (more about him below); I saw it many a year ago at Lincoln Center and am still amazed that Locorriere had committed the very long poem to memory. One very helpful soul has posted the entire poem here, replete with the original illustrations by Brad Holland and an awesome pic of Shel as the Prince of Darkness.

Shel's tunes written for adults are all over the Internet. I have a major fondness for his 1962 album Inside Folk Songs, which I bought on cassette from Radio Shack a long, long time ago. (I didn't know it at the time, but it was quite odd to be obtaining a '62 musical humor album on cassette from a Seventies reissue on audio cassette. I can only assume that Shel's rep had grown so much because of "A Boy Named Sue" that the copyright holders thought the demographic that bought cassettes would spring for a copy.) 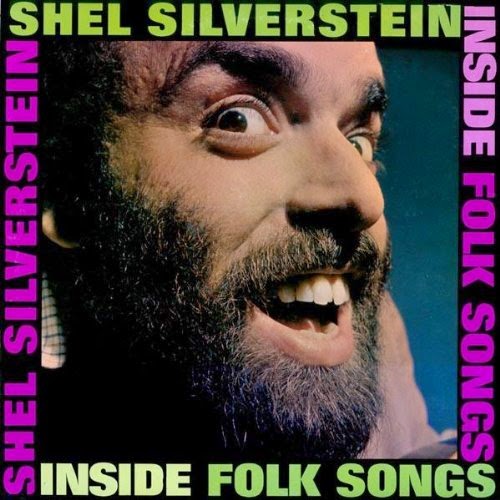 The lead song on that LP, “Bury Me in My Shades” sets the tone for that album, which combines some of his purest whimsy with his anguished country and folk tunes, all sung in his unmistakable rasp. It's an album that also betrays Shel's fascination with ending a tune abruptly when the narrator is killed (“Boa Constrictor,” “25 Minutes to Go”).

His 1972 record Freakin' at the Freaker's Ball album (about which, more below), on which he was backed by Dr. Hook and the Medicine Show, was his best-selling album, since it rode on the coat tails of the Dr. Hook hit versions of his tunes and it found Shel totally in tune with the times.

Again, on the schizo-ness of his public persona, the title tune “Freakin' at the Freaker's Ball” boasts the lyrics “Hard hats and longhairs kissin' each other/father with daughter/son with mother/smear my body up with butter/and take me to the freaker's ball!” and “The white freaks, black freaks, yellow and red ones/necrophiliacs looking for dead ones/The greatest of the sadists and the masochists too/saying 'you hit me and I'll hit you' ”

Kinda out of the ordinary for a kiddie-book author discussed with much reverence at parent-teacher assemblies, but Shel was a one-of-a-kind talent.


From the same album comes Shel's hookiest, most memorable “dirty” tune (my call), “Stacy Brown Got Two,” his tale of a much-desired gent who was “double-blessed!”


Shel's participation in movies was pretty limited. He coscripted the pleasant but forgettable comedy Things Change (1988) with his friend David Mamet and composed songs for the Mick Jagger outlaw film Ned Kelly (1970), the great Rip Torn country-music drama Payday (1973), and the 1990 Meryl Streep/Shirley MacLaine pic Postcards from the Edge (for which he was nominated for an Oscar). 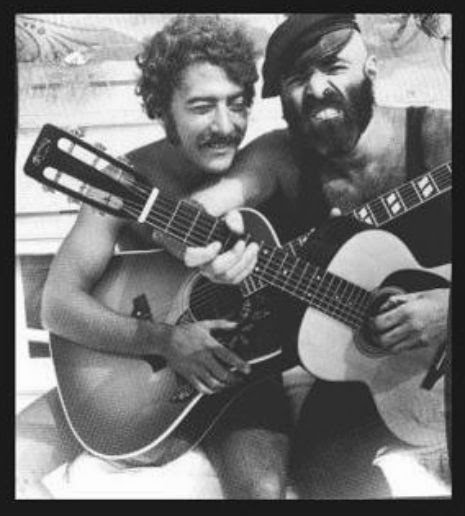 The one film he had the most input into was Ulu Grossbard's Who Is Harry Kellerman and Why Is He Saying Those Terrible Things About Me? (1971). The film is a classic creation of the early Seventies, a “downer” pic that contains some great performances, exquisite writing by Herb Gardner (especially this scene with Barbara Harris, which I posted to YT because it must be seen!), and trippy direction by Grosbard.

Shel performs onscreen in one sequence with Dr. Hook and the Medicine Show, the band he discovered for the film. He provided the group with all their early hits (and this beautiful closing tune for the film). Shel sings “Bunky and Lucille” with the Medicine Show and the movie's star (playing a Dylan/Phil Spector-ish superstar) Dustin Hoffman:

Now to the most valuable discoveries “hidden in plain sight” on the Net. First, the “lost” Shel album, an item he recorded before Freakin' that assembles some of his most feverishly insane songs. Remember as you hear this that he has already written The Giving Tree and some of his other best known kids titles (Where the Sidewalk Ends came along a few years later).

The whole album, which can be heard here, was scrapped and never released. Shel only retained his version of "Sarah Cynthia Sylvia Stout" for his next album, which happened to be Freaker's, which was adult, but less confrontationally so (and besides, it featured the then-famous Dr. Hook band).

The title song cuts right to the chase. It's called “Fuck 'Em” and that's exactly the way Shel feels:

Shel really put his all into the anti-pot “sermon” called “The Dope” (methinks the troubadour doth protest too much....):

The other major discovery is that Shel was part of a Dr. Hook special made for Danish TV. The show was shot on Shel's houseboat and here he gives a wordy introduction to the band:

The Dr. Hook band had a raw sound that suited Shel's emotionally charged tunes beautifully. Here, from the same special, is “Carry Me, Carrie,” a Silverstein tune about a homeless man and his lady. The vocalist, Dennis Locorriere, had a tremulous delivery that wrenched every emotion from Shel's lyrics. (He was the first singer Shel entrusted with arguably one of his best-ever serious tunes, “The Ballad of Lucy Jordan”; his version was surpassed by Marianne Faithfull's definitive version of the song.)

One of Shel's other heart-breakers, one that became a big hit for Dr. Hook was “Sylvia's Mother.” Again, Lecorriere's voice is just perfection, and Shel plays harmonica.

I approach the end of this "survey" of Shel's adult work with another super-rarity, Shel on PBS. He's guesting on a Dr. Hook Soundstage special from 1979, shot in Chicago (per Shel's introductory mention of a Chicago beach). He sings one of his “risque” little numbers, “Show It at the Beach,” about nude beaches. This clip is delightful, because it represents something that only Shel's friends seems to have experienced, him doing his “dirty” material live.

There's no better way to close out than with Shel's summation of life, written for the “Old Dogs” combo of Waylon Jennings, Jerry Reed, Mel Tillis, and Bobby Bare. The quartet cut an album in 1998 that contained many Shel songs, but this one sorta takes the cake. It runs through all the things we do to stay in good health, “and you're still gonna die!”

So said the man who left us too early at 68, but had a helluva good life. It seemed like he did whatever he wanted, and he was talented enough to do so. The work he left us, both the kid-stuff and the “adult” material, is timeless.

Posted by Media Funhouse at 4:35 PM