A look into the working methods of Alain Resnais — and which comic books (and strips) did he read anyway? 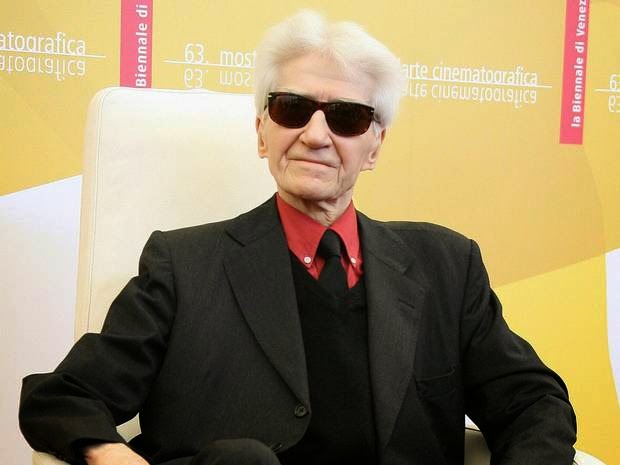 Of all the filmmakers in the nouvelle vague, Alain Resnais had perhaps the oddest journey, from rigorous aesthete to director of charming middle-aged romances. These later films were remarkable, in that they were just as concerned with his already-established dominant themes — time and space and the disappearance/appearance of love — and yet they were quite linear and didn’t offer the sort of chronological “puzzles” present in his startlingly innovative early work.

When Resnais became a Deceased Artiste the other week at 91, I wasn’t sure how I wanted to discuss him on this blog, since his filmography can be easily broken down into several “periods”: the first group of documentaries and shorts; the classic early fiction features, each written by a noted author; his late Sixties/early Seventies work, in which the storylines start to become more linear and big-names (Belmondo, Dirk Bogarde, Depardieu) begin appearing in his films; the first films with his muse Sabine Azema, in which he starts to explore theatrical concerns (in a cinematic context, *always* in the context of movies); and the final group of utterly charming middle-aged (and sometimes senior) romances, all costarring Azema, Pierre Arditi, and Andre Dussolier. (I deeply love Same Old Song, which I wrote about here – with all attribution scrubbed by a later editor of the site.) 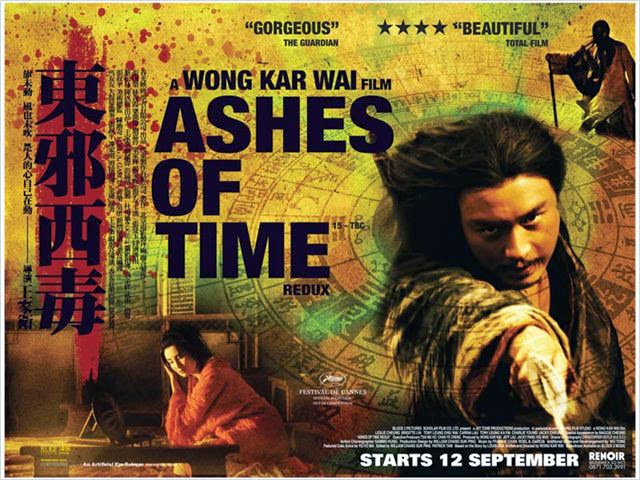 I’ve been charting on the Funhouse TV show how Godard has remained the most influential of all the “New Wave” filmmakers (he is also one of three surviving members of the group, along with Agnes Varda and the now-ailing Jacques Rivette). In recent years I’ve noticed that many filmmakers —especially those in Asia, led by Wong Kar-Wai — have been quoting Resnais with equal enthusiasm. His early meditations on time, memory, and identity evidently resonate with these directors, and it’s fascinating to see their variations on his themes.

Resnais was indeed a multi-faceted artist whose work showed the influence of classical art (check out his early shorts on libraries and museums), modernist fiction, and the cinematic masters from different eras (including silent cinema). He also was a comic book and comic strip reader, and made no effort to hide it.

In interviews Resnais betrayed a self-deprecating attitude toward his own skill (see him discussing how he does not consider himself an auteur here). When asked about his strengths as a filmmaker, he often said he felt most comfortable as an editor, that was his truest “vocation.” Clearly his interest in comics fed into that. Thus he was an artist who embraced both the “high” and (so-called) “low” extremes of culture (here he notes he doesn’t mind his films being called “baroque”).

Yes, Resnais was a rabid comic buff who, one obit noted, served as the vice president of the French comic club des Bandes Desinees.” A few other obits reported that he was supposed to have had the biggest comic collection in all of France (as Wikipedia sez, “citation needed” on that bit of trivia).

However many comics he owned, it was clear that, while cinema, literature, and theater were his primary concerns, his love of comic books (and strips) was never that far behind. He wasn't a “pop-art” director like William Klein, and he didn't paint his sets primary colors and use the jump-cut in the comic-like manner of Uncle Jean (aka M. Godard), but every few years Resnais would indeed sneak in mentions of his passion for comics.

In Resnais' 1956 documentary short “Toutes la mémoire du monde,” his study of the Bibliothèque Nationale in Paris, he takes time out (at 8:45) to drift past a stack of Sunday supplements, with “Mandrake the Magician” and “Dick Tracy” on the front page of the top two.

The crew and “cast” (in this case meaning extras) is pretty extraordinary: cinematographer Ghislain Cloquet, composer Maurice Jarre, with “collaboration” from poet Jean Cayrol, cinematographer Pierre Goupil, “Chris and Magic Marker” (that’s how he was billing himself then), Agnes Varda, and the man who created Mandrake, cartoonist Lee Falk. 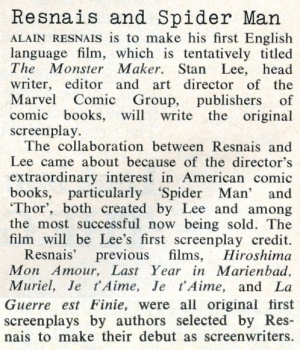 Then the leap into Sixties comics: Brian Cronin over at the Comic Book Resources site has clarified the rumors surrounding a supposed “script written by Stan Lee and Alain Resnais.” Cronin's research reveals there were two projects the duo were going to work on, the first being an existential story about inmates in a jail in the Bronx, the second a more “personal” work for Stan the Man about a schlocky horror director who graduates to direct a mainstream feature. (The clipping to the right comes from this Tumblr.)

Cronin includes a quote from Lee in which he notes that the second project nearly got off the round, but Resnais refused the prospective producer's request to cut Lee's script – given Resnais' utter devotion to his screenwriters, this sounds more than probable.

What remains from the friendship between the two is an oddity: a four-minute segment shot by Resnais and narrated by Stan Lee for the director Jacques Doillon's political comedy-drama L’an 01 (1973).

The film chronicles the day in which all French workers give up working in protest of the government being, well... the government. This radical action is recognized as a breakthrough around the world (it's not a very well-thought-out political satire, this film), as illustrated by a scene shot by Jean Rouch in Nigeria and a segment shot in NYC by Resnais.

Thus we hear Stan read out imaginary stock exchange rates. It's a fun segment, if only to see NYC in the early Seventies. Doillon's film is more of a joyously nuts historical artifact than a legitimately entertaining (or politically pointed) film, so the Resnais segment is one of its highlights – it begins here at 30:42:

Perhaps it was a good thing that Stan and Alain never got to collaborate, since the Resnais film that most directly celebrates comics, and was scripted by an iconic cartoonist, is one of his most disappointing.

I Want to Go Home (1989) is the tale of an American cartoonist (played by composer Adolph Green) who visits Paris with his girlfriend (Linda Lavin) on the occasion of an exhibit of cartoon art that includes his work. The exhibit has been curated by a French fanatic for American comics (played by Depardieu); the cartoonist’s visit allows his daughter (Laura Benson) who has been living in Paris, to see her cranky old man and try to heal their relationship.

Considering the fact that Resnais was such a major comic fan, and that the great Feiffer wrote the screenplay, one expects more from the film than it ultimately delivers — plus, Green was a wonderful lyricist, but he really was not a very good actor.

That said, the most interesting moments in the film all take place when Depardieu hosts a costume party in which the guests are dressed like comic book and cartoon characters. In these scenes we see people dressed as Marvel and D.C. characters (the iconic ones, as well as Elektra and the Spectre), cartoon strip mainstays (Popeye, Olive Oyl, Tarzan, and Mandrake — yes, that’s Geraldine Chaplin), and animated favorites (Tweety Bird). The most notable inclusion is a Feiffer favorite (and most likely, one of Resnais’ favorites as well), Will Eisner’s The Spirit.

In the montage below, which I uploaded to YT, I included not only the most colorful scenes from the costume party, but also the moments when Green’s character discusses old cartoonists. (By the way, Green is dressed as his own comic creation.)

That must be the first and only instance of a couple “meeting cute” over Will Eisner books.

As a closer, I offer a three-minute segment from an interview I conducted for the Funhouse TV show with Lambert Wilson, the very talented actor who starred in four of Resnais’ final films. This talk took place upon the U.S. premiere at the “Rendezvous with French Cinema” of Resnais’ Not on the Lips.

The exceptionally dapper Monsieur Wilson (yes, he is French, a fact you’d never know from his beautiful English) elaborates Resnais’ method with his actors from the Nineties onward (in the “middle-aged romance” period I mentioned above). I noticed that he refers to the director throughout as “alainresnais,” presumably in deference to M. Resnais’ age — that is not the case. Check out the various interviews with his actors and colleagues on YouTube, in both English and French, and you’ll find that the filmmaker was most always “alainresnais” to even his chummiest of colleagues (and his wife Sabine!).

Wilson provides us with a valuable insight into Resnais’ work with his actors. Plus, he spotlights Resnais’ favorite movie comedian (he is a lot like Woody Allen in this regard) and which variety of comic he had laying around his house (although I’m sure he loved Marvel too — see above). I had a wonderful time talking to Wilson, and this is definitely one of the highlights of our chat.

Resnais had the least elitist tastes of the Nouvelle Vague directors, and the cross-pollination worked wonders. He was early on the TV-as-art bandwagon.