But can she boogie all night long? (two doses of Spanish kitsch) 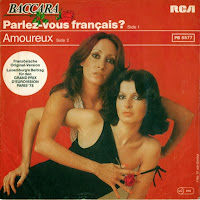 As I try to prep two longer “profile” pieces I thought I should harken back to the earlier days of this blog with two lovely discoveries on YT. One West Coast blog, with a dozen writers on staff and advertisers to boot, has recently taken to doing what I and other solo (unpaid) bloggers have been doin' on a regular basis for years (namely touting interesting, odd, and “alternative” clips that have come to our attention). That blog has short entries and just highlights one clip or link at a time – I find it impossible to just leave the reader with one meager little offering, thus this double helping....

The theme, as the title indicates, is kitsch en el estilo Espanol. I start out with a female singing/dancing duo who were gigantic across Europe in the late Seventies but were barely (never?) heard of over here. The ladies were Mayte Mateos and María Mendiola, and their name as a duo was “Baccara.” They were dancers who began as flamenco/disco specialists (that's already two talents) and were converted into a successful musical act by a German record mogul and a Dutch producer-composer.

Baccara sold millions of records all across Europe, and Russia, and Japan, and the U.K. (similar to the kitsch-overload that was Boney M), starting with their wonderfully – and respectfully! – titled debut single, “Yes Sir, I Can Boogie”:

That song became a “summer song” all across Europe in '77, so of course there needed to be a follow-up. In this case the English lyrics are even riper (“They don't make men like you in our city!”). Again, a comma in the direct address:

And because there is no better way to prove your “international” cred than by singing a song about the Old West, I present Baccara's Western saga “The Devil Sent You to Laredo.” The songwriter rhymes “Laredo” with “desperado” (des-peray-do) – what more can you ask for? 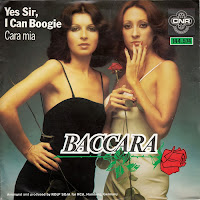 A few other Baccara tunes deserve honorable mention, particularly their covers of “Yummy, Yummy, Yummy” and “Light My Fire” with a new opening (that includes the line “oh lover baby, why don't you reach out for love?”). Baccara in fact participated in the Eurovision Song Contest (after having had hit singles and somehow representing Luxembourg – don't ask).

Online biographies of the Baccara ladies emphasize the fact that they had an acrimonious break and have since formed singing duos with other women, both laying claim to being the “real” Baccara. In the meantime let's remember the ladies as they were, an elegant pair of Spanish dancers who happened to score major success singing odd songs in English. Like their tribute to men of the sea, “Ay, Ay Sailor”:


Staying in the Spanish groove, I shift the spotlight from music to television with an extremely unique clip from the Spanish TV game show Un, dos, tres... responda otra vez. Politically correct it ain't. 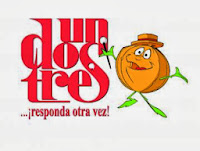 First, some details about the show: Un, dos, tres... was on for 10 seasons broadcast over a 32-year span (1972 to 2004). I won't even try to elaborate its three-part construction, but it seems that the single best feature of the show (at least in its initial incarnation) is that there were a group of people cheering for the contestants to win (the host and his “secretaries,” cute babes wearing glasses) and another group haranguing them to lose (this should be tried on American shows).

The clip below comes from the ninth season, which aired from 1993 to 1994. In that season two new twists were introduced to this already complicated show (in which contestants answered questions, did physical stunts, and then had an “auction,” consisting of “luck and psychological games” – !). The first change was in the rules – contestants now had to “buy” their way into later rounds. 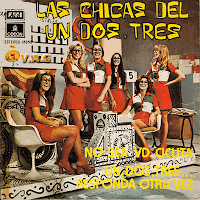 The second alteration was that Paloma Hurtado, one of the well-loved women in the show's cast, to cite Wikipedia, “could not join the cast on the first months because she had been accidentally shot in the face weeks before the launch of the season and was recovering from the surgery.” Happily, Paloma returned to the show only a few months later.

But onto the clip. Here the show's theme is “The old Mississippi,” and actress Luisa Martin leads the contestants in a fun game that involves a bunch of white women “blacking” themselves up (UPDATE: a previous episode from 1982 contained a single "blacked-up" actor). I don't think this particular game will ever be played on American television:

I thank fellow kitsch aficionado (and game show expert) Rich Brown for leading the way to this strange gem.
Posted by Media Funhouse at 10:52 PM