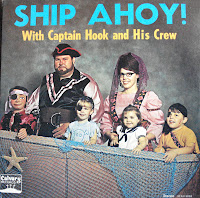 There is nothing, and I mean nothing, stranger than Christian children's enterainment (which fits snugly into the category of Krazy Kristian Kitsch, as I like to call it). I used to present it regularly on the Funhouse TV show on Easter weekend, but the new stuff just ain't as special as the older programs and home videos. One of the items I was happy to show on the program more than 15 years ago was a children's TV show that was first seen by most of us on a VHS compilation called “Perverse Preachers, Fascist Fundamentalists, and Kristian Kiddie Kooks,” created by the editor of the zine called “Zontar the Magazine from Venus” (whose blog is here). Please meet Captain Hook! 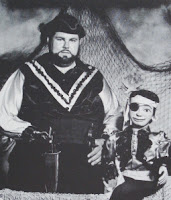 There are various sites that offer information about the good Captain, but it all boils down to this: his name was Von R. Saum, a gent from Scott, Ohio, who lost his arm and leg at the age of 17 in a motorcycle accident in 1960. This accident led him to Christ and a “Christian pirate” ministry (!) aimed at kids.


Various newspaper items online note that he officiated at various funerals and was indeed an ordained minister. The other piece of info I discovered is his mother's gravestone (the Internet is insane); the accompanying info lists Von's death as happening in 1993 at the age of 50. Thus his “Captain Hook Crusades” ministry is now shut down. 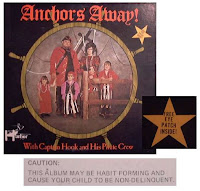 Happily for us, he left behind a kiddie television show (see below) and not one but TWO LPs. The second record was uploaded by the 365 Days Project at the WFMU blog. The first one (image at top of this blog post) was uploaded by the wonderful Baikinange on her blog; that one has liner notes by Colonel Sanders!


In this "intro" segment from his show, Capt. Hook tells us the story of his motorcycle accident. The show ran in Ohio and, apparently, Indianapolis; according to some online commenters this was in the Seventies, but the rap segment below definitely would signal the Eighties. He is ably assisted by not one but two pirate pals (Fish Hook and Seaweed Sam), and Mrs. Hook, who reminds us that “God is not a child abuser.” [Insert your own priest joke *here*.] The “Christian Pirate Puppets” are also on hand – most of which are Muppet ripoffs, but one is a ventriloquist's dummy (more on him below):

Can this get better? Of course, it can, it's triple-K, kats and kitties. The dummy, named “Sharkey,” performs a white-boy rap, while his two human-being shipmates dance around like idjits. Why is the dummy repeatedly saying “Look at all those cute girls”? I have no idea, but it makes the bit even creepier. 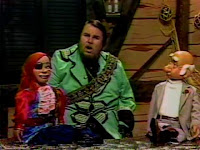 The next item, uploaded by Zontar, has under 500 hits on YT, while viral-vids get millions and millions and are not one-millionth as weird or funny. The Captain and Fishook conduct an “autopsy” on a sinner (presumably the carcass of Sharky). The Captain instructs his assistant to cut the sinner apart and informs us of the potential sins that can be committed with each part of the human anatomy. Done with utter sincerity, and not a bit of irony – exactly the way it should be.

Happy Easter, all!
Posted by Media Funhouse at 4:29 PM