The Man Who Put his Art on Film: Deceased Artiste Nagisa Oshima

One of the modern masters of Japanese cinema, Nagisa Oshima left behind a legacy of great films. I will be spotlighting what has to be the strangest – and, yes, silliest – of his works in this blog entry, but I want to first sing the praises of this brilliant renegade filmmaker.

He died a few weeks back at the age of 80 from pneumonia. He had had several strokes that had debilitated him and kept him from working. He was born to a wealthy family (obits noted his father ran a “fisheries research unit” and died when Nagisa was very young). His political conscience was formed when he was at Kyoto University. There he became ardently leftwing and chose film as his vehicle of expression.

His first professional job was at the Shochiku studio, where he was an assistant director; around the same time he also wrote film criticism, like his French counterparts in the nouvelle vague. His first films showed the influence of Godard and company, as well as Nicholas Ray – my fondest memories of his Cruel Story of Youth (1960) are the ways in which it resembled Rebel Without a Cause. Here is a fascinating relic from that era, a 1959 short called "Tomorrow's Sun," which functions as a trailer for an imaginary film. The short has no subtitles, but seems to betray Oshima's fascination with, and need to mock, the accepted "codes" of storytelling in mainstream moviemaking. 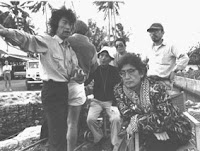 As the Sixties moved on, his films became more and more political and militantly stylized (a la Godard and his colleagues in the Japanese cinema). The political message of his Night and Fog in Japan (1960) got him fired from Shochiku; he composed the film in only 43 shots, constructing a new kind of tour de force.


I need to catch up with a lot of the Oshima films from this period, but I really enjoyed one of his more radical works, a seeming step past Uncle Jean's La Chinoise, Diary of a Shinjuku Thief (1969). The fact that a couple have sex during a political riot would seem to have impressed Bertolucci (who has a similar scene in his Dreamers). It is a brilliantly disjunctive film that is available in its entirety on YouTube:

Other very important works from Oshima in the Sixties included Violence at Noon (1966) (which counterpointed the 43 shots of Night and Fog... with 2,000 shots), Death by Hanging (1968), The Man Who Put His Will on Film (right, 1970), and The Ceremony (1971), which is available in its entirety with English subs here.

The film, about a geisha and a married man becoming involved in an obsessively sexual relationship, could not be developed in Japan because of its graphic content, and thus was sent to France to be developed. Most of Oshima's obits rightly quoted the statement he made at a trial over whether the film was obscene or not: “Nothing that is expressed is obscene. What is obscene is what is hidden.”

He won the Best Director award at Cannes for his next feature Empire of Passion (aka, “In the Realm of Passion,” 1978), a very good film but one that paled in comparison to In the Realm... (a notion that was true of most of his later works).

It was often speculated as to why he made so few movies after Empire – only six films in twenty years, two of them telefilms. After 1996, it was health issues, but between '78 and '96, it was clear that not only had he “said the unsayable” in terms of In the Realm, but he publicly went on the record decrying Japanese cinema (his most famous quote being “My hatred for Japanese cinema includes absolutely all of it” – although he had a very polite interview with Kurosawa in 1993, the hero of his youth whose films he later rebelled against). 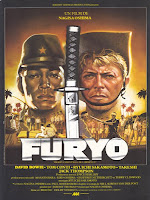 He maintained his films were made “to force the Japanese to look in the mirror,” and with the uneven but still underrated Merry Christmas, Mr. Lawrence (1983) he made both Japan and England look in the mirror. As noted, his health declined when he had his first stroke in 1996, and he had several more after that.


While in retirement from film he reportedly became a talk show host on Japanese TV (no clips from this exist on YouTube, though). It was also noted that he translated books, including John Gray's pop psychology tome Men Are From Mars, Women Are From Venus! His final triumph was indeed Taboo, his last fiction feature made in 1999, about gay desire in a samurai school.

If you want to experience the best of Oshima, please check out the many great films cited above. However, if you have, like me, an incurable fascination with camp, kitsch, and general weirdness, watch the embed below and see Oshima's weirdest project ever, his next-to-last fiction feature Max, Mon Amour (1986). 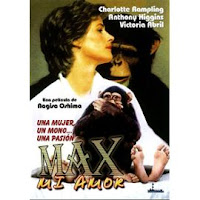 The film primarily carries the stamp of its screenwriter, Jean-Claude Carriere, the sublime scripter who worked with Bunuel and Polanski and wrote The Tin Drum and The Return of Martin Guerre. Max is not one of his strongest works, since it is an absurdist satire about a diplomat's wife (the always elegant and sexy Charlotte Rampling) falling in lust with a monkey (a guy in a gorilla costume, who was “advised” by makeup expert Rick Baker).

The film is intended to be amusing and starts out to be blithely odd, but gradually descends into being plain silly (with a car chase that's straight out of a Seventies live-action Disney flick). I think the film slowly falls apart as it continues, but no less than Charlotte Rampling – in the documentary Charlotte Rampling: the Look – considers it one of the best scripts she ever read.

I have uploaded my short review of the film from the Funhouse TV show before the clips below. Please drink in the weirdness and enjoy. But remember – Oshima was a master-filmmaker who was not evidently trying to get something made when he made Max, Mon Amour....

Posted by Media Funhouse at 5:55 PM