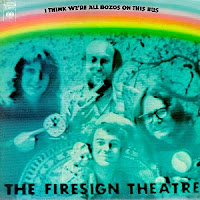 The parade of DAs continues. From a maverick publisher, two character actors, and an exploitation icon in part one to an extremely mainstream composer and a consummately trippy humorist in part two...

Composer-lyricist Robert B. Sherman died last week, thus causing many folks to dote on his best-known score, Mary Poppins, written (as all his works were) with his brother Richard. Poppins certainly got them many accolades, but the two Sherman brothers wrote a number of other unforgettable tunes, since songwriting was definitely in their genes — their dad Al wrote the songs “You Gotta Be a Football Hero” and “No! No! A Thousand Times No!”

It was said in their obits that Walt Disney cried every time he heard their song “Feed the Birds” from Poppins (I'm guessing he never heard “Artificial Flowers”). The brothers were in-house for "Unca Walt" for several years, writing songs for movies from That Darn Cat! and The Gnome-Mobile to The Aristocrats and Bedknobs and Broomsticks.They also wrote songs for Snoopy Come Home (a score that is pretty awful, but cannot be forgotten), the Johnny Whitaker Adventures of Tom Sawyer (which they also scripted), and the cartoon feature Charlotte’s Web. 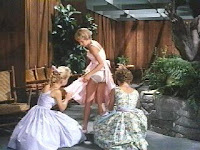 Some personal faves include this attempt at really catchy-dippy pop sung by the twin Hayley Mills in The Parent Trap. This film, which is wholesome as all get-out, was the subject of many adolescent boy’s fantasies — that’s clearly the subject for someone’s future treatise on the covert sexuality in the Disney live-action pictures (after the tomes on the hidden sex in the cartoons are completed), but I guess this sequence and the catfight scene (in which one “Hayley” tears off part of the other’s skirt) were nowhere as innocent and cute to the young male viewer as they seemed to girls and older audience members:

Boppin’ The Jungle Book, with Louis Prima seen rehearsing (in photos) his big number for the cartoon, and the finished song itself: 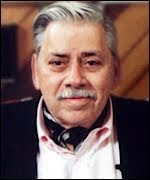 Robert Sherman (not to be confused with teen-idol Bobby Sherman!) was a self-professed American Anglophile who lived over in England after the war (during which he won a Purple Heart), and then again in more recent years. Poppins contains a number of songs that depend on Cockney accents (Dick Van Dyke’s oddly spirited but goofy ’alf an accent has been the subject of much ridicule in the UK), but this number from Chitty Chitty Bang Bang has Dick participating in a great song-and-dance number with a bouncy melody that is very hard to shake:

Since I must include something from Mary Poppins, I offer up this bizarre find, someone’s upload of the song “Chim-Chim-Cher-ee” in Russian (fuckin’ title makes no sense anyway!). It was noted that the Sherman brothers switched off on the lyrics and melodies, so then Robert did contribute to this Slavic ditty:

To close out, I note that the Sherman brothers wrote the single most memorable, and also most grating, Disney tune, “It’s a Small World (After All)” for the 1964 World’s Fair. One of their much less annoying pop creations was the song “You’re Sixteen” for Johnny Burnette. Here is Ringo Starr’s version, circa a 1978 TV special (the girl he’s romancing is a young Carrie Fisher):

I still hope to pay tribute to another immaculately talented Deceased Artiste, Erland Josephson, in the future, but in the meantime, I’ll note that as I was writing this, I learned that Peter Bergman of the Firesign Theatre died. I have a weird relationship with the work of the Firesign guys, in that I love the “theater of the mind” quality of their comedy, and yet I was never a diehard fan — those I know who love Firesign speak of them as having changed their life and way of thinking. For me, they were brilliant audio satirists who did some miraculously headphone-friendly humor, but were not compulsive listening material.

That said, their best work comprises some brilliant spoofs of TV programming, commercials, and golden-age radio drama. They were indeed a product of radio — after having studied playwriting and teaching economics at Yale, Bergman became host in 1966 of “Radio Free Oz” on the Pacifica station KPFK in L.A.

It was there he started working with Phil Austin, David Ossman, and Philip Proctor, and the Firesign troupe was born — their moniker taken from the old Fireside Theater TV show and the fact that they were all “fire signs” astrologically (this was the Sixties, after all).

Among his many head-trip credits Bergman is credited with coining the term “love-in” for an event he organized that took place in L.A.’s Elysian Park. He was the Firesign member with the most conventional “radio voice,” and it was used to great effect in the Firesign parodies of mass media. At the time of his death he had was doing a daily podcast — he concluded the last episode, which aired a few days before he died, with this extremely hopeful message.

Onto the clips. Here is a very nice video tribute to Bergman:

My personal favorite of all their bits is an item where they would read fake listings from TV Guide (I used to write real listings for the same mag, and the Firesign spoofs are so spot-on they’re often not that funny, just all too deadpan-accurate). The bit was used on their radio show Dear Friends and was included in two incarnations on the 1972 LP of the same name. You can find them here at 19:27 and 43:39 (find out about the children’s show “Minority Street, where ‘Happy Hamburger recites the Book of the Dead’…”):

The Firesign Theatre was such an audio-centric act for me that I can’t imagine them live in concert, but they have indeed toured in different permuations since their debut in the late Sixties. Here’s a sample of the kind of odd anarchy that comprised their stage act in 1972:

Far more potent for me is this deranged VW commercial the group did for a real L.A. dealership in 1969. The full run of Firesign commercials (that auto dealer was one adventurous dude) are available on Archive.org:

Perhaps the group’s supreme achievement in my view is their ongoing series of spoofs of hardboiled detective stories, “The Further Adventures of Nick Danger, America’s Only Detective!” (or alternately, “Nick Danger, Third Eye”). They made one film of Nick Danger, which has its moments. But the single best way to experience the concept, naturally, is in headphones:

Various wacky lines have been posted on the Net based on the very famous (intentionally wordy) Firesign LP titles — "there's one less bozo on the bus," "he can be two places at once because he's not anywhere at all," etc etc. Since that way lies eulogistic madness, I'll just say RIP Peter Bergman.
Posted by Media Funhouse at 10:54 PM