Departing in droves: Deceased Artistes of early 2012 (part one) 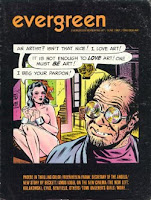 No, this isn’t an obituary blog. But I do like to pay tribute to those whose work I’ve enjoyed who receive a tiny bit of mainstream attention upon their death, and are then shuffled off onto the scrapheap of pop-culture history. Thus, I salute six folks who’ve kicked off in the last few weeks and deserve a final salute.

The first tip of the Funhouse skimmer goes to Barney Rosset, the legendary publisher and man behind Grove Press. A true free-speech hero, Rossset made a habit of introducing controversial authors to these shores. Some were from overseas and some were American originals who couldn’t get their best works into print in their native country.

Rosset’s biggest legal battles were over Tropic of Cancer, Lady Chatterly’s Lover, and the amazing Naked Lunch. I know his books were a rite of passage for me as a teen, and NOT just because they had “dirty” content (although that was not unwelcome).

The Barnes and Noble located downtown at 18th Street and Fifth Avenue was like a paradise to me as a kid and teen (books as far as the eye could see!). The store had its used paperbacks divided by publisher, and every time I went there I went straight over to the Grove Press bookshelf (with the City Lights stuff on the bottom). I never quite cottoned to Beckett (seen above, with Rosset) as a teen, but loved Ionesco to death (still do) and was constantly checking out what showed up used on the B&N Grove shelves. 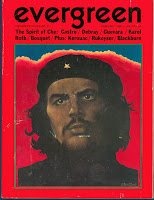 Rosset made it his life’s work to showcase the works of great writers, and one of his foremost creations was Evergreen Review, an incredibly hip and progressive publication that featured during its initial run (1957-73) a literal who’s who of great authors: (from the U.S.) Kerouac, Burroughs, Ginbserg, Mailer, Bukowski, Sontag; (from overseas) Sartre, Nabokov, Duras, Genet, Oe, Borges, Pinter. There’s a paperback collection that I highly recommend called The Evergreen Review Reader.

Rosset made movie history in the U.S. by choosing to distribute I Am Curious (yellow), the controversial film by Swedish filmmaker Viljot Sjöman. The film was an uncommonly intelligent essay about contemporary culture that happened to have a few sex scenes in it. I’ve always felt that the most likely reason for it attracting so much disgust in conservative circles (besides the fact that folks in those circles are idiots who are horrified by the human body) was because the film's star Lena Nyman looked to be a minor (she wasn’t). 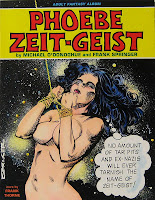 But why more than anything should I be eternally grateful to Barney Rosset? Because Evergreen Review gave us the genius-level of derangment that was displayed in the “The Adventuers of Phoebe Zeit-Geist,” the cartoon series drawn by Frank Springer and written by the inimitable Mr. Michael O’Donoghue.

Phoebe was a gorgeous, barely dressed nincompoop who got herself involved in a never-ending series of lethal odysseys. It’s a very special part of Sixties humor, the darker side of American comedy that surfaced right after Terry Southern graduated to Hollywood (Southern was one of O’Donoghue’s heroes, along with Burroughs), and of course saw full fruition with the heyday of The National Lampoon.

The Evergreen Review was revived in 1998 and is still publishing here. As for Barney, we say farewell with the only two salient clips on YT, which both come from the 2007 documentary Obscene directed by Daniel O’Connor and Neil Ortenberg. The first is the trailer:

We move from renegade publishing into mainstream show-biz, with two character actors whose faces were familiar, but whose names were only known to those who collect such important trivia.

I could find no interesting clips spotlighting the first gent, so I’ll just farewell to Leonardo Cimino, who died at 94 last week. He made a specialty of playing creepy villains and characters of all ethnicities. He appeared in NYC-shot TV series, from the sublime Naked City to Kojak to Law and Order, was memorably cast as an alien in the TV series V, and had supporting roles in many, many movies including Cotton Comes to Harlem, the wonderfully awful The Monsignor, and The Freshman. He made his last big-screen appearance in Sidney Lumet’s terrific Before the Devil Knows You’re Dead.

The second character actor to depart recently was Phillip Bruns (often billed as Phil Bruns), who was best known for his role as George Shumway, the blue-collar dad of Louise Lasser on the wonderfully sharp soap-opera parody Mary Hartman, Mary Hartman, but he was constantly busy, being seen in small parts on both TV series and in the movies.

Bruns worked in NY productions for a time, and then moved to the West Coast and worked exclusively in L.A. I remember fondly his appearances in A Thousand Clowns (pitching a TV project to Jason Robards) and Midnight Cowboy (as a TV host asking about makeup for dogs as Joe Buck is flipping channels on TV), but he also was in Frank Perry’s The Swimmer, the ultimate NYC-is-hell Neil Simon comedy The Out of Towners, and the PBS Kurt Vonnegut adaptation (starring Bob and Ray and Cousin Brucie!) Between Time and Timbuktu.

As part of the letter-perfect ensemble on Mary Hartman, he was the brusque dad who never understood (or wanted to comprehend) the stuff going on around him. There was only one DVD collection of the series, which, instead of offering the best moments, provided only the first two-dozen episodes.

All of these are currently available on YT for free (THAT’s how much Sony does not want to release the series), and there is no hope of ever getting the later episodes on disc (or the amazing tie-in series Fernwood 2-Night with Martin Mull and Fred Willard). Here is episode one. Bruns shows up at the 8:05 minute mark discussing a coworker who turned out to be a murderer and Mary’s marital troubles with her husband (Greg Mullavey) and his coworker (Graham Jarvis):

I move from two great character actors to a cult exploitation actress. Lina Romay died recently at the premature age of 57 and is much missed by the cult-movie community, including Tim Lucas of the wonderful zine Video Watchdog. His obit for her is here.

What is my problem with Franco’s cinema? Well, just about every cult moviemaker who has a great reputation I feel has gotten that reputation because their films are either quality works of cinema (Corman, Metzger, Meyer, Sarno, Jose Mojica Marins), or because their work is bad but fun to watch (Herschell Gordon Lewis, Doris Wishman, Mike Findlay, and of course Ed Wood). 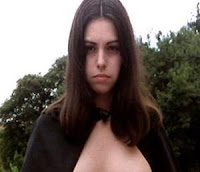 I have seen a handful of Franco’s films, and while I find that his soundtracks are often terrific, the films themselves are crashing bores — which is about the single worst thing that exploitation can be. To elaborate, I absolutely love women’s prison pictures and have seen most of them over the years. I have found it rather stunning that Franco’s WIP pictures are extremely dull, even compared to some of the cheesiest straight-to-video items that came out in the Nineties.

For example, here is the trailer for Barbed Wire Dolls, his chicks-in-chains outing that starred the very photogenic and sexy Ms. Romay. The trailer is pretty dreary, as is this rather blah scene that a fan uploaded (for what reason I don’t know, but it perfectly illustrates the tedium one can encounter in a Franco flick):

Thus, we have an actress who was quite fun to watch in softcore and horror movies, working hand-in-glove with a director who is hailed as a major auteur, but I just don’t get it. If anyone wants to suggest the single-best Franco movies that can convert a nonbeliever who’s already seen a half dozen clunkers from different eras — including some supposed “masterworks” — please leave the titles in the Comments field below.

In the meantime, here’s another Franco scene that looks to be “psycho” and edgy, and is instead just goofy (and sadly enough, not very amusingly goofy). What one carries from this fragment is that he was more than willing to adopt kitschy elements (as with the other actress’s makeup), and then not really do anything interesting with them. Thus, I throw you into Lorna, the Exorcist (1974):

I’ll close out with a fan-made music-video tribute to Ms. Romay. Here the oddly chosen moods and tones of Mr. Franco are refreshingly absent:

Posted by Media Funhouse at 6:37 PM