It’s that time of year again. My favorite holiday is upon us, and no, it ain't Xmas or even my birthday. It is All Hallows’ Eve, when monsters are celebrated and people don odd costumes to let their interiors surface on the exterior, for a few hours at least. One of the people I’ve returned to again and again on Halloween episodes of the Funhouse is “shock rock” god Alice Cooper.

Much as I love Alice, he was not the first to do what he did — he, of course, did it to perfection and with a band that was an absolute killer (album title ref, excuse the geekdom). After Alice came KISS (four Alices, acknowledged as such at the time), solo Ozzy, Rob Zombie, King Diamond (boo), Marilyn Manson, and stageshow specialists GWAR and Rammstein. (The shock-rock category frequently lists punk acts, but if we’re doing to do that, I’d rather rhapsodize about the Cramps than talk about GG Allin). 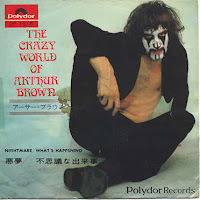 Before Alice, there were three gentlemen who pioneered “horror rock” while making some memorably catchy music. I’ll work my way backward and start with Arthur Brown, whose band The Crazy World of Arthur Brown delivered some wonderfully nightmarish theatrics. Thus, it makes sense to introduce him with the song “Nightmare,” as performed in the 1968 film The Committee. Dig that crazy headgear!

Brown’s Sixties stage show is preserved in this footage, which is punctuated by him being interviewed out of makeup:

Rare color footage of the group, intercut with animation by Gerald Scarfe (best known for Pink Floyd's "The Wall"):

And, of course, the biggest discovery for any Alice Cooper fan is that Brown’s makeup foreshadowed the design that Alice eventually settled on. Here he and the band (who were only together for one LP) do a full-blown TV presentation of their biggest hit, “Fire”: 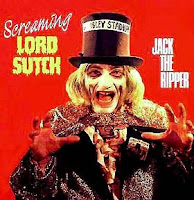 Arthur is thankfully still with us, but a musician who preceded him in the shock-rock biz has departed the scene. Screaming Lord Sutch, “the 3rd Earl of Harrow” (a completely made-up title) took a few notes from the last of our three shock-rock pioneers (including coming out of a coffin onstage), but he also began in a very good place, working for master-producer Joe Meek.

Interestingly enough, he continually ran in Parliamentary elections, eventually founding his own political party, which he named the “Official Monster Raving Loony Party.” He was never elected to office (although he did get a respectable amount of votes in various elections), but he definitely left an imprint on the pop-rock world with a series of horror-themed hits, including “All Black and Hairy”:

and “She’s Fallen in Love with a Monster Man”:


His biggest hit was a classic horror tune about one of England’s greatest contributions to the world of nightmares, “Jack the Ripper.” Here is a publicity film made for the song:

And a now-quaint but then-transgressive live performance of the song with his group, the Savages:

Screaming Lord Sutch sadly committed suicide at the age of 59 in 1999, but his inspiration, and the man who qualifies as the very FIRST shock-rocker, the inimitable Screamin’ Jay Hawkins, lived to be 71 and was hailed as a crazed god of performance-rock stagecraft. 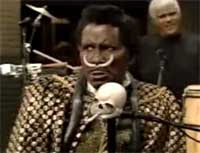 A Cleveland native, Hawkins served in the Air Force in WWII. He aspired to perform in the manner of his hero Paul Robeson, but one drunken night in a recording studio in 1956 gave him his biggest hit, the unforgettable “I Put a Spell on You” (see below). He started touring in the late Fifties with voodoo props and a bone in his nose, emerging from a coffin at the start of his show.

He sang catchy, creepy ditties like “Little Demon” and, much later, kept his "monstrous" reputation by singing tunes like Tom Waits' “Whistlin’ Past the Graveyard”

Screamin’ Jay was a “wildman,” as was proclaimed in a favorite scene from Jarmusch’s Stranger Than Paradise. He also had an incredibly powerful and evocative voice, as is evident in his rendition of the very non-horrific “I Love Paris.” And speaking of Paris, it is the city that Screamin’ Jay died in, in 2000, but also was home to one of his biggest fans, himself a hellraiser, Serge Gainsbourg. The two dueted only once, but it is an incredibly memorable collaboration, on Hawkins’ “Constipation Blues” (it’s not much of a duet, Serge is actually too busy laughing):

It is noted in Screamin’ Jay’s online bios that he sired many children (anywhere from 55 to 75 — then again, after the first 10, who’s counting?). The song that will forever be associated with him, and has been covered by every shock rocker from Arthur Brown to Marilyn Manson, is indeed “I Put a Spell on You.”

Hawkins maintained that the song was intended to be sung as a tender ballad, but that he and the musicians got very drunk the night it was recorded and it came out the way it did. Here is amazing footage of Screamin’ Jay, bone in nose and voodoo props on display, performing it in his prime. If you just listen to the record it definitely registers as one of the great songs about romantic/sexual obsession. Performed this way, it’s undeniably “haunting”:

Posted by Media Funhouse at 2:01 AM

I still have to finish the article, but... why boo King Diamond?