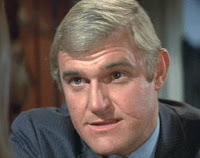 The Manhattan cable show Media Funhouse went on the air 18 years ago this month, and so I thought it only right to upload the first-ever clip I showed on the program, especially because it featured an actor who left us just last week. First a note about the beginning of the show: in the first few weeks of the program I covered exploitation cinema ("auteurist" exploitation cinema) exclusively. A few weeks in, I was able to diversify the contents of the program when I did my first Deceased Artiste tributes (Fellini, Vincent Price, and Frank Zappa).

To “catch viewers’ attention,” I felt there was no better attraction than the work of Russ Meyer, and thus I presented what I consider the seminal clip from Russ’s work, a montage that is so compelling, so unrelenting, so brilliant, and yet so nuts that it can indoctrinate you instantly into the Meyer cult. And there was no better male lead in any of his films than Charles Napier, a square-jawed blond gent who often played villains, but whom Russ envisaged as a two-fisted hero in the wonderful Cherry, Harry & Raquel (1970) and as a psycho cop in the so-over-the-top-that-it-says-too-much-about-Russ’s-mindset Supervixens (1975), possibly my least-fave Meyer pic.

Napier’s obits explored how the Kentucky native had a number of jobs before he finally settled on acting as his vocation: among other things, he was a high school art teacher, a parking lot attendant, a typist, a truck driver, and (my favorite) a photographer for a trucking magazine. 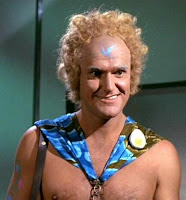 He was a familiar face on TV, who appeared in Mannix, Kojak, The Rockford Files, Starsky and Hutch, Dallas, and The Incredible Hulk — to which he contributed some of the Hulk’s growls! One of his most memorable TV roles was as a “space hippie” in the Star Trek episode “The Way To Eden.” In recent years, he continued to appear not only in mainstream and “DVD premiere” movies, but also worked as a voice talent for cartoons like Squidbillies and The Critic.

Though he is best known by the general public for his supporting roles in Rambo: First Blood Part 2 and The Blues Brothers, he was indeed beloved by film buffs for his roles in four Russ Meyer movies, and his being a kind of “good luck charm” supporting performer in the films of Jonathan Demme (a casual look over his filmography reveals at least eight Demme films he had prominent small roles in, including such hits as Silence of the Lambs and Philadelphia).

While the obit in Variety noted he played a general in four different films, it’s as a sheriff that I’ll always remember him. And speaking of that, below is the clip I spoke about, the scene from the end of Cherry, Harry & Raquel that will convert any neophyte filmgoer into a fan of Russ Meyer. The montage begins in earnest at 1:54 with the great line, "Now all of this didn't really have to happen...."

It’s a power-packed montage that includes virtually every scene in the film (including the odd “thematic” ones in which Uschi Digard is seen symbolically acting out the plot in a desert setting). My high school film teacher maintained that Meyer was the most Eisensteinian of modern filmmakers, and this was undoubtedly true — what he achieves here with his editing and characteristically overwrought narration is to nearly create an “altered state” for the viewer.

He also demonstrates his debt to Eisenstein in the lead-up to the killer montage, in which he intercuts a rather pedestrian showdown between Napier and the actor playing “Apache” with a rather pedestrian lesbian scene, thus creating something exciting out of two rather non-exciting scenes of people clearly pretending to do stuff. Meyer’s world was a ripe and lurid one, and he had no better alter ego than the tough (but oddly friendly-looking) Napier. Please enjoy the scene below — I know you will.

I stepped over this beautiful tribute few days ago.
Thanks for it. :)

Today would have been, Charles 79th birthday.
Happy birthday Charles,
where ever you may be now,
have great fun.
We miss you.

I did enjoy the video,
thanks for it.

For me Charles WAS the best
and finest actor ever.

I' d first seen him december 1979,
when " Oregon Trail " started here in germany.
I was a boy, age 13, looking out for a new hero.
I never, my whole life, forgot that scene on the bridge, ending up, Luther taking a bath. :) :) :)
Then few moments later, Evan arrives at Luther' s home,
Luther takes him to the grave of that Colonel, pointing on it
" There he is. " , and with NO expression on his face, but you could hear the smile in his voice
" Enjoy your talk. " :) :) :)
That did it to me and Luther became my hero.
Unfortunatly " Oregon Trail " was repeated only once
and than disappeared from the sreen and never came back. :(
Luther always stayed in my heart
and I often wondered, if I ever will see him again.
Few weeks ago, I discovered
" Oregon Trail " on DVD with 6 new episodes, they hadn' t aired here in germany.
For the first time, I could listen to Charles own beautiful voice,
really what a great beautiful warm voice.
In germany the shows are doubt with german speakers and I must say,
now that I knew Charles own voice, the german voice quite don' t fit anymore. :)

Through my whole life, I saw Charles in a lot of his films and series
and it was always great fun watching him.

I often wonder,
how such a handsome nice fellow,
or like you said oddly- friendly- looking,
could play such bad brutal villains.

Yes man, no one has such a great scowling stare like Charles had. :)
I deeply miss him
and I' m glad, he left us such a lot great work of his. :)