In and Out of Fashion: Deceased Artiste Annie Girardot 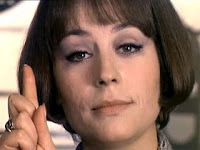 I sing the virtues of character performers all the time on this blog, and sometimes “A-list” performers age into “character-hood,” and do so quite well. Such was the case with Annie Girardot, who was initially a sex kitten in French film (as so many French actresses in the Fifties and early Sixties were), and then developed into both a very talented actress and an éminence grise whose presence connoted that a film was definitely of a higher caliber.

It was noted in some of her obits that in a 1972 popularity poll of the French public Girardot scored higher than both Bardot and Moreau. Well, popularity polls don't really count for much, and the popularity earned can be too soon gone. What was important was that Madame Girardot kept on working throughout her career, appearing in several films a year. It was also noted in her obits, especially in the French press, that her family and show business friends (including La Bardot) said that it was a tragedy how Annie was “forgotten” by the French cinema, with special venom directed at the French New Wave filmmakers.

I would step to their defense to note that the New Wave was never an organized unit, so there was no “decision” by the filmmakers from that movement blackballing Girardot. She fell victim, unfortunately, to what happens to older actresses all the time in the film world: she was “in” and then she was “out.” To her credit, she kept on working, all through both phrases of her career.

In 1995 she publicly acknowledged that she loved working in French cinema when she won the Best Supporting Actress award at the Cesars for Claude Lelouch’s adaptation of Les Miserables (more below). Perhaps the most dramatic and sincerely brave thing she did occurred in 2006, when she publicly revealed she was suffering from Alzheimer’s disease. Girardot became “the public face” of the condition in France, and participated in a very moving documentary called Ainsi Va La Vie that you can see scenes from below.

I will note that the Girardot clips in this post are for the most part in French with no English subs (unless I mention that there are subs). In the case of the films I’ve picked, though, the visuals and her fine acting shine through, whether you’re fluent in French, passable at best (as I am), or don’t know a word of the language.

There’s no better way to start off than this very beautiful montage, which the YT poster says he didn’t create but “found online.” Surely it was done for a celebration of Girardot’s work, possibly toward the end of her life. In any case, it is a beautiful summation of over four decades of an actress’s work:

A TV special hosted by Annie in 1959 feature none other than Edith Piaf as her special guest. I believe the song Piaf sang is here, but here is the host segment with the two women chatting:

The turning point for Girardot was her supporting performance in Rocco and his Brothers (1960). It was a watershed in terms of her professional life, since the film was a major success across Europe and an arthouse favorite in America. As for her personal life, she married the man who kills her in the film, actor Renato Salvatori. She remained married to him until his death in 1988, but they had been officially separated for the last years of the relationship. The entire Visconti classic can be found here. Here is a key scene featuring Girardot’s character:

Girardot worked alternately with French and Italian directors in the Sixties making films like Mario Monicelli’s Les Camarades (1963). My favorite moments from her career come at this point, when she worked three times for the inimitable Marco Ferreri. (Check out segments from my interview with Signore Ferreri). The first of the three contained what was without question Annie’s most daring move: staring as a hirsute woman exploited as a freak by Ugo Tognazzi in Ferreri’s sad/funny/weird The Ape Woman (1964). Here is one clip from the pic (which was released with two different endings):

A bit more of the brave, hairy Annie:

So, pretty much nothing Girardot would do in her career could be a surprise after she took that first chance with Marco to appear as an ape lady (and, remember, that when I interviewed Il Maestro Marco he did claim that his actors did nothing embarrassing in his pictures. The pictorial evidence sorta contradicts that….). She next appeared in a Marco movie as the sexy maid that Michel Piccoli cheats on his hot wife (Anita Pallenberg) with in the low-key-to-the-max supercrazy allegorical Dillinger is Dead (1969). Scenes between the two can be found here:

Annie’s appearance in another Marco mindfuck The Seed of Man is not online, but it is quite something, as again she plays the provocatrice for a seemingly post-nuke Adam and Eve (the very sexy snake in the garden, who meets a very nasty but not entirely un-Biblical end). The end of that pic can be found here. Annie’s coolest, most psychedelic-Sixties pic can be found in various places on YT, however. It is called Erotissimo, was made in 1969, and stars her as the wife of an executive who is trying to deal with the overflow of sexual material she sees in popular culture. Two cool-as-hell scenes that are worth your attention but do not feature Girardot are available here and here. This should give you an impression of how Sixties the pic is:

And this supplies us with Annie in aviatrix gear singing a tune called “La Femme Faux Cils,” with women’s magazine ads intercut, for the full psych effect:

And just in case you weren’t sure if the film was a bona fide piece of crazed Sixties creativity, here is Annie meeting a guest star we love very much in the Funhouse (with English subtitles!):

Girardot’s films are not out in great profusion on DVD, but Les Novices (1970) is. Any film that starts with cute nuns stripping down to bras and panties, and then follows a novice (Bardot) and a hooker (Girardot) as they try to raise dough in various ways on the streets of Paris, of course deserves our attention, but it’s a cute entertainment, not a major comedy by any means. The biggest surprise on the film’s credits is that it was written by Paul Gégauff, whom I wrote about in my Deceased Artiste tribute to Claude Chabrol. IMDB also lists Chabrol as having done uncredited direction on the film. I would think if he really contributed to it, it would’ve been just a slight bit sleazier and sexier…. Here is the trailer:

One of my favorite underrated French filmmakers is the darkly comic master Bertrand Blier. Girardot had a support role in his very strange “road movie” Merci La Vie (1991):

Annie and the great Chabrol/Eustache star Bernardette Lafont in a scene from the women’s prison drama (warning: not much sexploitation here!) Les Prisonniéres (1988 ):

Girardot’s career was brought “back to life” with her supporting role in Lelouch’s adaptation of Les Miserables (1995) starring Belmondo. I will confess I have not seen the film, but this is a scene that appears to have been Annie’s “bravura moment”:

As with most aging performers, Girardot’s final great roles were as mothers of younger stars — she was Adjani’s mom in La Gifle (1974), and played Huppert’s mother twice, first in Doctor Francoise Gailland (1976), and then in Michael Haneke’s disturbing La Pianist (2001):

The final triumph of Madame Girardot was not a fiction film, it was a TV documentary called Annie Girardot: Ainsi Va La Vie, which aired on French TV in 2008. As noted above, she bravely announced she had Alzheimer’s in 2006, and was thereafter known to the French public as a sufferer of the condition. This documentary found her reviewing her career and also interacting with her family. This segment begins with the important moment at the Cesars in 1995 where she won the Best Supporting Actress honor and there wasn’t a dry eye in the house, with several of her women colleagues deeply moved by her speech:

This segment from Ainsi is exceptionally sad but heroic, as Annie talks about her condition. Like many great French stars, her voice changed over the years due to constant smoking, but here the habit enhances her “mysterious” quality. Even in decline, she had a radiant and intriguing screen presence:

Posted by Media Funhouse at 8:43 PM