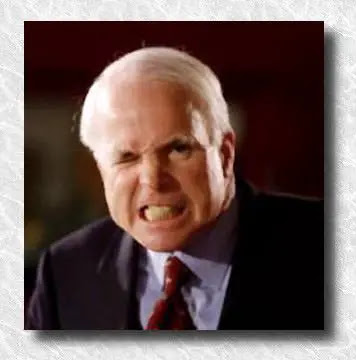 Ah, my friends (you know I really want to associate that phrase with Joe Franklin, NOT John McCain), I don’t often touch on politics, but let me just note my disdain for the Cranky Old Bastard who's the Grand Old Party’s candidate for Pres. He’s man who was “broken” during his time in captivity (he himself used that phrase at the Republican Convention, what a strange item to bring up in a campaign speech), yet never needed any treatment for his PTSD (as his wife noted last week, only those who didn’t “attend the Naval Academy” need that kind of therapy). He clearly evidences that snotty temperament every time he is confronted by any sort of probing question — usually those related to how his positions on different topics have changed from day to day, hour to hour, never mind year to year…. He’s a mean old dude who’s wealthy as shit and really doesn’t, let’s be honest, really doesn't care about ya, not one little bit.

UPDATE: In the one day since I wrote these words, Johnny "Mac" has since been a cutie-pie at both the Al Smith dinner and the Letterman show. He has a way with a dry joke, I'll give him that. But then again, Reagan was a charming old fuck and he was a shitty President. Let's not confuse being funny onstage with the Mean Old Bastard we saw in the three debates and in any of the interviews that were mildly probing.
Posted by Media Funhouse at 12:17 AM