Underground in the Arthouse: Guy Maddin's Brand Upon the Brain!

I’ve been featuring clips from Guy Maddin’s films nearly since the Funhouse began, and have been very gratified to see that as the years have gone by, Guy hasn’t “gone Hollywood.” I don’t think it would be possible for him to do so anyway, given the special eccentricities of his art, but it’s been particularly interesting to see the ways in which he’s moved further and further from the multiplex “model” of bad mainstream cinema.

If a Maddin fan attempts to describe his work to the uninitiated, the first phrase that always comes out is “he makes tributes to silent movies.” That he does, but in fact he makes movies in the primitive, low-budget ways that silent moves were actually made (one of the myriad of reasons we can’t see him helming a multi-million dollar cookie-cutter H’wood pic). He pays tribute to the silent style, but his plotlines have always been particularly strange and self-aware — the scripts constructed for his films by Maddin and George Toles contain quirks and (especially) kinks that exaggerate and transcend the sleaziness of even the great outré silent filmmakers (including a Maddin fave, the great “Von,” Erich Von Stroheim). Add onto these Freudian-symbolic storylines the editing style that Maddin has recently adopted — in which simple actions are repeated, sped-up, slowed down, or even completely elided — and you’ve got a very special, particular style that seems to have more to do with the classic American underground films of the 1950s and ’60s than it does with silent movies. 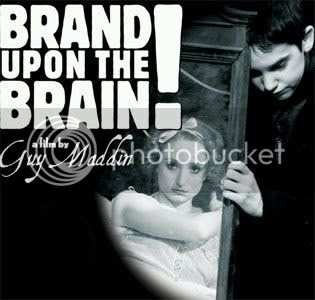 Maddin has made a practice of borrowing from, and seriously exposing, his own family mythology in his recent work. Thus his most recent picture My Winnipeg was an uncategorizable dream film in which Maddin reflected on his hometown through the crucible of his childhood, with historical details, local legends, and yet another portrait of a domineering but loving mother thrown in for good measure.

The film before Winnipeg, Brand Upon the Brain! has just been released in the Criterion Collection, and so Maddin fans have the unique experience of seeing Guy enshrined along with the classic arthouse directors, and for once not suppying an audio commentary for the feature — his past films have nearly all had Guy expounding in detail on his filmmaking methods, while imparting his own personal neuroses. In fact, I’ve noticed that as his public persona has become more self-deprecating, his art has become more assured, as if the “Guy Maddin” who publicly represents the films is a Woody Allen-type construct, concealing a dedicated artist who has a found a way to more than work through his Freudian dilemmas and can appear bashful, but must be secretly delighting in turning his relatives into wildly colorful characters (as his real-life beauty-parlor owning aunt was turned into a hot blonde Madam in his Cowards Bend the Knee).

As I’ve noted more than once on the Funhouse, and have mentioned to Guy in an interview, if there is a single more Freudian scene than the urinal moment in Cowards where “Guy” sees that his father has a much, much bigger penis than he, I’ve yet to see it.

While Cowards and Winnipeg seemed like broader cartoon shadings of his family, Brand is an out-and-out fantasy scenario that he contends in the accompanying featurette is “97 percent true” because the familial relationships reflect the Maddin clan. The plot, about a lighthouse where a domineering mother sucks brain juice out of tots to keep herself looking young (in consort with her dead naked mad-scientist husband), is enriched by a host of unusual plot threads, my favorite being the adventures of a teen girl detective disguised as a boy who is the groom in the silver screen’s first lesbian Fantomas marriage (the detective babe wears the eyemask of the legendary French master-criminal).

Guy’s fascination with silent movies led him to conceive of a live-performance aspect to Brand that was undertaken in several cities, including Toronto, NYC, and L.A. These performance featured the film being projected while a live team of Foley artists created old-radio style sound effects, an orchestra playing the soundtrack (accompanied by a “castrato” singer, more anon), and a live narrator for the pic.

We missed out on Udo Kier here in N.Y. (dammit!!!), but we did have the largest array of narrators, or rather “interlocutors” of the kind in Japan who used to “explain” the action in silent-movie houses (the explanations here being a torrid text by Maddin friend Louis Negin). Among those who appeared here were Lou Reed, Laurie Anderson, Eli Wallach, Anne Jackson, poet John Ashbery, Tunde Adebimpe of the band TV on the Radio, Crispin Glover, and the woman who supplied the permanent audio track on the movie (permanent until this disc came along), Isabella Rossellini, who performed the narration at the NY Film Festival. The Criterion disc thus features a record eight variant soundtracks, as you can choose to hear Ms. Rossellini in the “finished product” mix or live, Guy himself, Negin, or from the live performances Anderson, Ashbery, Wallach, and Glover.

The most interesting aspect of Brand is that it actually works as a silent feature without the narration, but certainly the melodrama quotient was seriously heightened. To give you a taste of what’s on the disc, I offer the following two snippets, Guy holding forth on the lure of “melodramma” (I misspell on purpose to approximate Guy’s Canadian pronunciation of the word) and the opening half of his bizarro short “It’s My Mother’s Birthday Today,” starring the aforementioned “castrato” who is actually a male singer with a falsetto voice (and presumably a real set of teeth – sorry, too much Marx Bros. training). "Mother's Birthday" is one of two new shorts that appear on the Criterion disc (along with a deleted scene that has some wild action, but I could see how it needed to be cut out):

Here we have three of the narrators doing the same brief story told to the orphans in the lighthouse (oh yeah, the lighthouse is an orphanage, thus Mom has her pic of victims to get brain juice from). I chose to excerpt the versions done by the very placid and ironic Ms. Laurie Anderson, a slightly more frenzied version by the always quirky Mr. Crispin Glover, and a full-fledged “melodrammatic” live reading by Ms. Isabella Rossellini. Listen to the voice levels rise….

And, just for good measure, here again is a segment from my own interview with Guy, where he discusses his work appearing on YouTube and his unusual and amazing new editing style:

Ive had Maddins films in my Netflix que for awhile now and 2 weeks ago I finlly saw my first film of his and it was Brand Upon The Brain.