The 'announcer's test' and the nonsense lyric 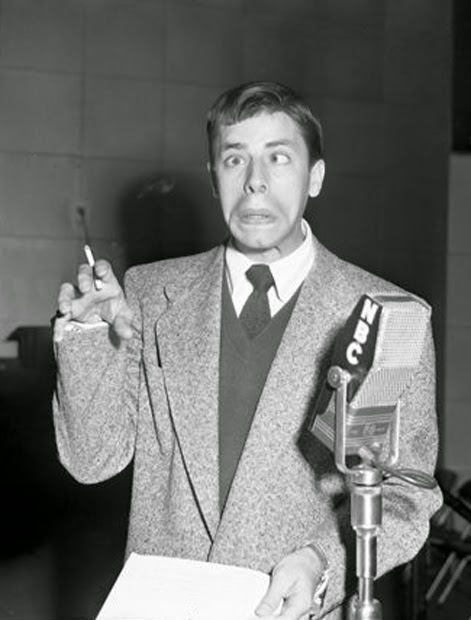 Summer is the season for silliness (and, evidently, alliteration). There is no greater place to discover purebred, 100% silliness than in novelty tunes (witness the recent welcome re-emergence of the one gent who singlehandedly has been keeping the genre alive, Weird Al). In this post I want to spotlight one piece of sheer ridiculousness and its connection to the world of “nonsense songs.”

Reportedly it was comic actor Del Moore who told Jerry Lewis about “the announcer's test,” a tongue-twisting, laundry-list recitation that was used at NBC to audition prospective radio performers. Lewis has been doing it now for more than half a century; I remember reading that at one point he recited it every night one week while guest-hosting The Tonight Show (I believe in the early Sixties). 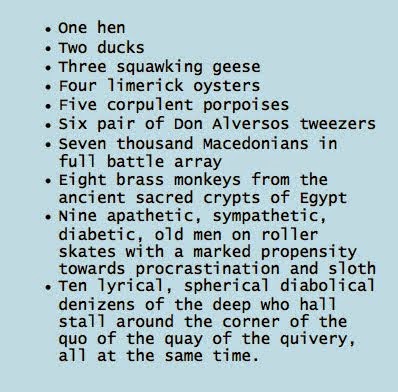 The Wikipedia entry for “the announcer's test” indicates that Moore took the test in 1941 – at that point Jerry was a young comedian doing a record-miming act, so I doubt he stopped the records to do this crazy recitation. In any case, Jerry became identified with the piece, which starts off “One hen/one hen, two ducks/one hen, two ducks, three squawking geese...”

One has to wonder how many times Jerry rehearsed that, knowing his perfectionist, control-freak tendencies. The most curious entry in the recitation, concerning “Don Alverso's tweezers” (the name is also spelled “Alverzo”) is explained in one of the many books about Lewis, but I am damned if I can remember which book and who Alverso was – if you are in possession of such knowledge, leave it in the comments field.

People who are not Jerry fans (and I know you're out there, I can hear you audibly loathing him) might be familiar with this recitation as a silly memory test taught at scout camp or in school. I for one am always brought in mind of the “Sanzini Brothers,” the alter-egos of Flo and Eddie, who were the alter-egos of Mark Volman and Funhouse guest Howard Kaylan of the Turtles (seen right with some friends).
Howard and Mark did the announcer's test in their act as “the Tibetan Memory Trick” and included a live recording of it on their 1975 album Illegal, Immoral and Fattening.


I was unaware of the test's existence as a pop-rock single from 1962 – for this, I thank correspondent and “high”/“low” cultural connoisseur RC. The single was called “One Hen,” and it was performed by a group of studio singers named “the Blue Chips” for this project. 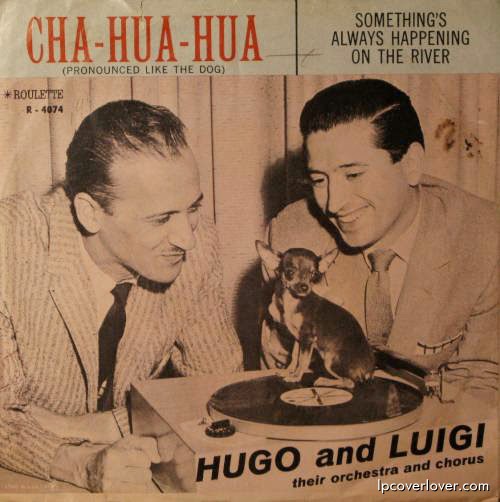 The men behind the single were Hugo & Luigi, two Italian-American cousins who worked in the music industry as writers, producers, and record label owners from the Fifties through the Seventies. Their careers included work with Sarah Vaughan, Jimmie Rodgers, Elvis, Sam Cooke, and Isley Brothers. One of their final hits was “The Hustle” by Van McCoy in 1975.

In the meantime, they had a little habit at one point of taking foreign melodies and writing new lyrics (with co-writer George Weiss) without ever acknowledging the source for the melody. It's not known if they did this a lot, but there were two very big hits that were examples of this tendency: The Tokens' “The Lion Sleeps Tonight” (from the South African musician Solomon Linda's song “Mbube,” better known over here thanks to Pete Seeger and the Weavers as “Wimoweh”) and Elvis's “Can't Help Falling in Love with You” (based on “Plaisr d'Amour” by Jean-Paul Egide Martini).

In this case there was no stated writer of the announcer's test, and they had to come up with the melody themselves (and it ain't much of a melody, just snippets of other tunes). It's quite a little ditty and it became the theme for radio personality Dick Summer (who I know and loved from his later days at WNBC and WYNY here in NYC) when he was on at nights on the Boston radio station WBZ. He called this crazy thing “The Nightlighter's Password.”

Thus, I present a small handful of these suckers, since the subject of novelty tunes and nonsense songs is very wide, very broad, and most certainly deserves its own blog (it has its own podcast, on which more below; I'm sure there already is a novelty records blog – if so, lemme know in the comments field below).

These songs have existed since recording began, but they seemed to become super-popular with the advent of the big band era. In 1939, Kay Kyser had a major hit with “Three Little Fishes” (with its refrain “Boop boop dit-tem dat-tem what-tem chu!” – in looking that up, I got to see at least four distinct ways of spelling this nonsense). 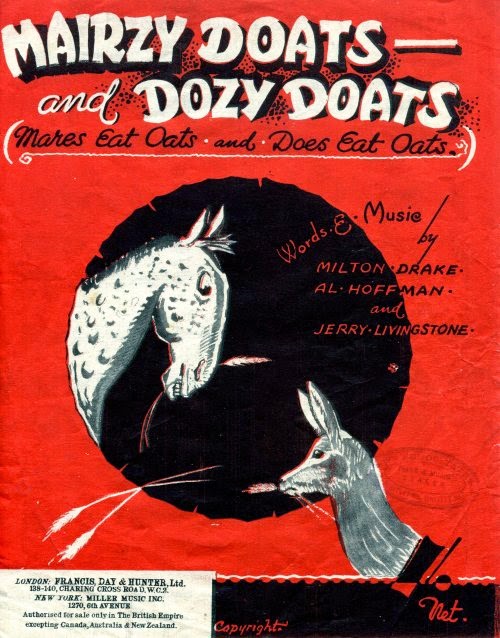 The one that broke new ground by explaining its insanity was, of course, “Mairzy Doats,” the 1944 hit by the Merry Macs. The song is truly catchy as fuck, but like a lot of really good whodunits, it loses much of its allure once you've heard the “solution” (which one of the songwriters said came from his daughter's mispronunciation of something she learned in school), there's not much more to absorb.

Still, the song provides a great defense when the argument is put forth that all the music the “greatest generation” listened to was on the order of Gershwin, Porter, and Kern:

In the Fifties, nonsense songs exploded in the period before rock 'n' roll took hold of the mainstream. This kind of music regularly charted, was performed by name artists, and became its own subgenre throughout the Fifties, Sixties, and Seventies. The forefather of the whole (WWII and after) thing is of course the god Spike Jones (not Jonze), who begat all the later great weirdo acts, from Tom Lehrer to Zappa with all the stops in between. Spike requires his own blog post, and more than likely his own fan-appreciation blog....

You can blame the emergence of a steady output of novelty 45s on the supposedly super-wholesome and anodyne nature of Fifties culture (a concept that is disproved when one actually digs into Fifties culture), or perhaps because there were more producers like Mitch Miller who put novelties in the mainstream with “How Much Is that Doggie in the Window?” and “Mule Train” (with its whipcrack); I prefer to nostalgize about the record Sinatra considered his worst, “Mama Will Bark.”

In the early Fifties, the nonsense songs weren't as nonsensical. In fact some were was downright educational, like the Four Lads' “Istanbul (not Constantinople)” (which most likely spawned Soupy's awesome “Pachalfaka”). Younger listeners recall the 1990 cover of the song by They Might Be Giants, a band that has ventured into novelty-tune waters (and later kiddie music) at various points in their long career (the duo also has a penchant for writing earworm compositions whose lyrics cannot be dissected).

I was taught this ditty by my mother as a small child. She never embraced rock 'n' roll heavily in the Fifties, but she did fall victim to the occasional novelty ditty:


I could go on and on about novelty records, but won't (right now). I will, though, point you to an act that followed in the tradition I've been talking about, the vocal combo known as the Gaylords. They were a trio of Italian-Americans (do you sense a trend here? Another post could handle Lou Monte and nonsense deity Louis Prima!) doing songs like “The Little Shoe Maker” and “Ma-Ma-Ma-Marie.”

But the earworms, man, the earworms... When the group performed in a distinctly non-Italian mode, they sang catchy Fifties tunes like this impossible-to-forget paean to a Chinese restaurant (which apparently has gotten a second life to a Mafia video game):


KBC – he of the Bitslap podcast – provided my intro to the music of the Gaylords. In one show he did a looooong time ago, KBC not only played “No More Chow Mein,” but the ditty below, “Papa Poppadopolis, the Happy Locksmith Man.” There is an incredible innocence at work here (the kind that was gone around the time of another song about a profession, Meri Wilson's “Telephone Man” – yes, the novelty-record trove goes deep, it goes verrrrry deep....).


And because this must end somewhere, I punctuate this discussion with a novelty/nonsense song that does actually hurt my head. It's sung by the calmest man in music, Perry Como, and is a carefully crafted tune that has a little “secret” to it... well, you'll figure it out in a line or two and you'll scream for mercy. This discussion of nonsense in music will be resumed at some point in the future.


Thanks to RC for the original “discussion” about “One Hen.” My thanks also go to the intrepid KBC, who continues to do excellent work on his weekly “Bitslap” podcast. He's currently on a short summer layoff, but has left us several years worth of old episodes and promises to be back in September!
Posted by Media Funhouse at 6:52 PM