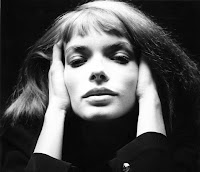 The strangest celebrities sometimes show up at genre fan cons. Such was the case when Zoe Tamerlis, aka Zoe Tamerlaine, aka Zoe Lund, showed up at the Chiller Theatre convention back in 1997. Tamerlis will forever be best known as the star of Abel Ferrara’s kinetic and disturbing action-vengeance pic Ms. 45 (1980), which is a fusion of Death Wish and Taxi Driver. She was also a very sad drug casualty, as she died at 37, after what is referred to on several websites as “extended cocaine use, which replaced her prolonged heroin use.” She was an uncommonly beautiful model-actress who made only six features, and scripted one of Abel Ferrara’s finest works, Bad Lieutenant (1992).

When I spoke to her, she was 35 and extremely nervous. Some of this no doubt came from having to sit at a very busy convention trying to hawk rather bleary photographs of herself (she agreed to do the interview in exchange for me buying one — which I planned on doing anyway). She brought up the subject of drugs herself in the context of speaking about Keitel’s “nod” scene in Bad Lieutenant, and I must admit I was too shy to actually probe the issue, as her hands were rather shaky and had bruises on them, she was feverishly chain-smoking, and was wearing a dark mesh top that was see-through, which I didn’t realize until the interview had already begun.

She leaves behind indelible film images in the films of Ferrara (who himself has seemingly left narrative linearity behind in recent years), as well as Larry Cohen’s Special Effects. She did speak about her heroin use in a documentary about the supermodel Gia, which can be seen here. More about her life can be found here and at a very thorough site created by her husband Robert Lund at www.zoelund.com


On her co-scripting credit with Ferrara for Bad Lieutenant

is there additional footage of this interview available anywhere?