Sometimes artists and entertainers are defined by their choice of romantic partners when they pass. Such was the case with actress and director Sondra Locke, who in all too many obits that appeared last week after the revelation of her death at 74 (she died in early November) was referred to primarily as the “ex of Clint Eastwood.”

Considering the nasty-ass way that Eastwood ended their relationship, and the salient fact that Locke’s career was more interesting in the years before and after they were together, this was a sad injustice to her life and work. 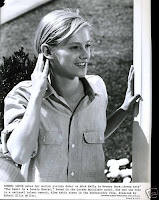 She began her professional acting career by winning a contest to star in Robert Ellis Miller’s 1968 adaptation of Carson McCullers’ The Heart Is a Lonely Hunter. The film is a heartbreaker, thanks to its script and direction, and its wonderful cast (led by Alan Arkin and featuring Chuck McCann). It is not easily forgotten because it captures both the awkwardness of youth and the fraternity of outsiders.

In the years immediately following Heart, Locke starred in a number of truly unusual low-budget features. This was a result of both the oft-commented-upon (in this blog, and everywhere else) unusually experimental nature of filmmaking in the early Seventies and Locke’s own somewhat otherworldly presence onscreen.

She had a featured supporting role in Willard (1971) and the unpleasant character study Cover Me Babe (1970). The latter stars Robert Forster as an egomaniacal playboy filmmaker who makes suitably surreal films and is willing to emotionally manipulate his friends to see how they will respond. 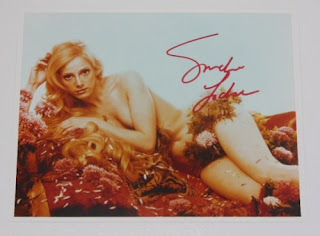 Locke’s role in the film isn’t very large, but she suits the atmosphere of the piece, as she plays an adventurous free spirit who is temporarily involved with Forster’s self-obsessed filmmaker. She also participates in one of his hidden camera shoots, in which she wears a fake chest to grab the eyes of male passersby (at 12:23):

The film that defines how Hollywood saw her at this time is the odd drama Suzanne (1974, aka “The Second Coming of Suzanne”). Directed by the son of actor Gene Barry, who costars as a Joe Pine-like arch-rightwing newspaper and TV personality, Suzanne is the story of a young filmmaker who devises a picture about a female Christ. Locke is the hippie girl who gets the role because of her beautiful – and, again, otherworldly — presence. 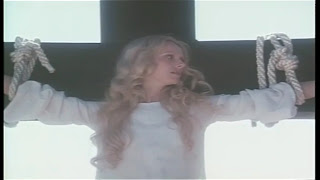 The actress suffers a real crucifixion in the film’s “what the fuck was that?” finale. At this point, as the director hammers the nails into her hands, we hear Leonard Cohen’s “Suzanne” on the soundtrack. The film is available in various public domain prints, presumably cut for TV; there are several minutes missing in these prints, as well as key images from the crucifixion scene, so the Cohen song “jumps” at various points.

Suzanne is one of those films that could only have been made in the “maverick” era of American moviemaking. While it ultimately winds up as a derivative, directionless mess, Locke is impressively ethereal in the role.

While Suzanne is the single strangest film Locke starred in, a horror film called Death Game (1977, shot in ’74) definitely rates as the second weirdest Locke performance. A male fantasy that quickly degenerates into a suspense thriller, the film concerns a husband (Seymour Cassell) left on his own who is visited by two blondes (Locke, Colleen Camp) who are out to cause trouble.

The film reflects two paranoid fears of middle-aged men in the early Seventies: the fear that “women’s libbers” would taunt men with sex (but not deliver) and that another Manson family was out there, waiting to kill people in the suburbs. Director Peter Traynor plays with both of these notions and also adds humor and kinkiness into the stew.


The three leads lend their roles an eerie verisimilitude, especially Cassell, who had starred in two Cassavetes films by the mid-Seventies and was thus the New York Jewish aspect of Cassavetes’ middle-aged male protagonists. Seymour was not pleased with Death Game, though — to the extent that he didn’t dub his character and so his familiar scratchy tones are heard nowhere in the film. 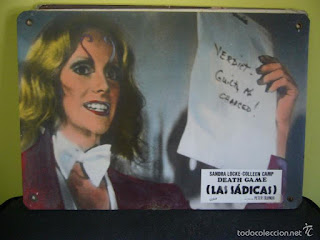 Locke and Camp were adult age when they played the leads, who are a teenager and her “jailbait” friend (or they claim to be – nothing can be taken on faith in this deranged pic). They are both very sexy and very menacing, although Traynor undercuts the menace at points by including a playful song sung by a chorus of British children on the soundtrack (and the film’s finale is one of the best shaggy dog endings ever devised).

The vintage Seventies trailer (the Tarantino-led group of current-day, would-be exploitation auteurs can never achieve *this* kind of Seventies-sleaze):

Before exploring Locke as a director, let’s briefly visit the films she did with Clint Eastwood. As noted above, she always had an unusual presence onscreen. The characters she played ran the gamut from ethereal and fragile to able to survive catastrophic weirdness. The last quality was one that appeared in her films with Eastwood.

It's definitely worth noting that in her films with Clint she most often played women who were harassed, molested, or raped. Even in Bronco Billy (1980), the lightest and most pleasant movie she made with him, she is accosted, so that Eastwood can come along and help her out. In the grotesque Dirty Harry outing Sudden Impact (1983) Locke getting raped is the “engine” for the entire movie.

A lighter moment amidst the victimization:

The most valuable thing that came about as a result of her much-chronicled relationship with Eastwood (filled as it was with him playing the alpha male offscreen as well as on) was that she got the chance to direct twice. She was supposed to continue her directorial career (a TV-movie and an indie film appeared, years later) but, her court case against Eastwood alleged, she was screwed over by Warner Brothers, where she was contractually employed to direct, but the thirty projects she pitched to the studio were all turned down. 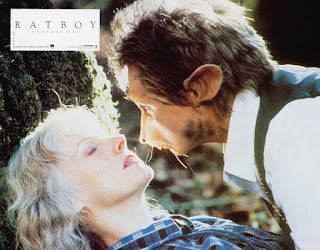 While her relationship with Eastwood was (seemingly) stable, she made her directorial debut with one of the strangest movies to come from a major studio in the Eighties (and given the bizarre array of things that were produced in the Eighties, that’s saying something). Ratboy (1986) is an odd mixture of allegory, comedy, and drama that revolves around a reporter (Locke) who finds a rodent-like humanoid creature whom she helps to exploit in the media, and then begins to sympathize with.

Ratboy thus starts out as both a Frankenstein/Phantom of the Opera “freak with a broken heart” horror tale and A Face in the Crowd-like statement about the star-making side of the media. It then becomes a very broad comedy and finally ends up as a tearjerker wth moments of suspense where the “Ratboy” is in jeopardy. 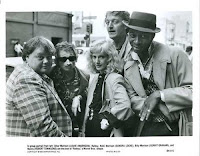 The comedic aspect stays with one the longest, most likely because Locke cast a number of comic actors and standups in key supporting roles. Funhouse favorite Gerritt Graham, Louie Anderson, Robert Townsend, Bill Maher, Jon Lovitz, Tim Thomerson, and others wander by, making Ratboy of a piece with the sorry sketch-comedy films that played on cable over and over in the Eighties.

The most fascinating piece of casting in the film is the Ratboy himself — or rather Ratgirl. Sharon Baird, a little person who had been a child star on “The Mickey Mouse Club,” plays the lead role, with a rodent headpiece designed by Rick Baker. Thus Ratboy’s crush on the reporter character does seem to be a lesbian infatuation. Baird’s character is intended to be fully sympathetic, but her costume and makeup look like the outfits worn by little people in the Krofft shows.

While watching the film, one wonders exactly which of its many “sides” was supposed to be the one that would attract a potential audience. One assumes the “tragic hero” aspect, but that is hardly believable at any point. The downright outré nature of the film earned it a cult following among French audiences and some fantasy fans. It’s by no means a good film, but it remains a fascinating film.

Locke’s second film was a much better, more easily digested work. Impulse (1990) stars Theresa Russell as an undercover cop who works vice and is conflicted about her job and the brief relationships she is having with other cops. 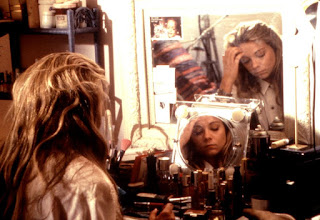 Russell is a fearless performer willing to take roles that most mainstream actresses would turn down (especially the “Oscar ladies,” who are looking to build a career of sympathetic performance tailored to lead the way to awards and the A-list). By the time of Impulse she had done terrific work with her partner at the time on and off-screen, Nicolas Roeg, and had been in a surprise box office hit (Black Widow, directed by Bob Rafelson). In Locke’s film, she gives a mature performance as a character who lives in constant danger and seemingly thrives on the play-acting entailed in her job.

Jeff Fahey is less impressive as the pretty boy attorney working on a big drug case who becomes Russell’s lover. His blandness is counterpointed with the casual sexism of Russell’s boss (George Dzundza), a condescending veteran who harasses her on a regular basis, including showing up inside her apartment unannounced. 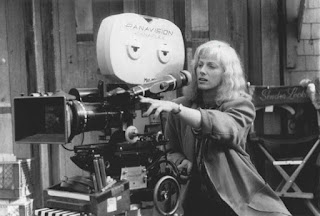 The only fly in the ointment here is a coincidence that occurs about midway— the “impulse” in the title, which is just too pat to taken seriously. This one bit of clunky happenstance aside, Impulse is a well-crafted noir that has a compelling low-key quality.

After her legal battles with Eastwood, Locke retired from acting and directing. Thankfully, Funhouse interview subject Alan Rudolph convinced her to take a role that was initially to be played by Lesley Ann Warren in his wonderfully “personal” character study Ray Meets Helen (2018). 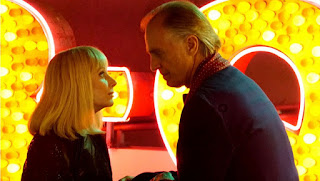 Locke was absolutely perfect for the part of Helen, a single and very neurotic woman who assumes the identify (and nicely affluent lifestyle) of a dead woman (Samantha Mathis). One of the best scenes finds Helen in a posh restaurant where she has no idea how to behave — again, Sondra’s otherworldly quality fleshes out a rather unusual character.

Rudolph’s personal films have always been a brilliant mixture of film noir and screwball comedy, with a focus on romantic relationships that are heart-wrenchingly real (in milieus that are tinged with little touches of fantasy). 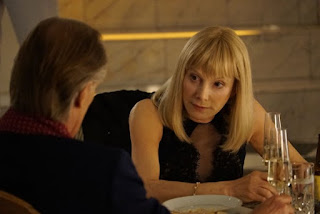 The triumph of Ray — besides the fact that it was made on a shoestring — is that it is a “senior romance” without even overtly mentioning that aspect. Locke seems shaky in her part (we now know she had been battling cancer for some time) but that benefits the role. Her costar Keith Carradine looks terrific for his 69 years but the” seasoned” nature of the characters becomes clear in a beautifully comic flirtatious scene between the two in the posh restaurant.

Carradine’s Ray is clearly smitten with Helen, but she is wary as hell. A lingering shot of the two holding hands across the table communicates all we need to know about their burgeoning interest in each other — and their age. 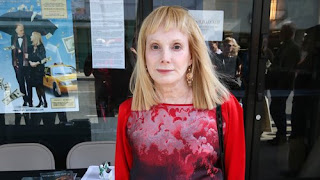 Hopefully Ray Meets Helen, which was shuttled out on DVD without any fanfare and can be found online legally, will serve as an epitaph of sorts for Locke, as opposed to the unpleasant headlines that adorned some of her obits — the worst being the reductive (and insulting) Hollywood Reporter header “Actress Sondra Locke, Embittered Ex of Clint Eastwood, Dies at 74.”

Locke deserved better, and got it from cult movie fans and those whose interest in movies goes far beyond the films she made with her ex. Now... what was that old man’s name again?
Posted by Media Funhouse at 7:48 PM