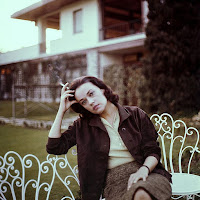 "One of my biggest heroes is Jeanne Moreau. She has perfected all the moves, the high art of smoking a cigarette . . . or walking with a straight skirt. Perfecting those kinds of rhythms are, to me, just as worthy of worship as somebody's playin' a great harmonica." — Patti Smith

When Louis Malle, the director who pretty much single-handedly jumpstarted her career, cast Jeanne Moreau opposite Brigitte Bardot in Viva Maria! (1965), he was creating a comedy team for his half-baked farce comprised of France’s biggest sex symbol and its most talented screen actress. BB was the former and Moreau was, without question, the latter.

Her obits dubbed her an iconic performer of the French New Wave, but she was so much more than that — and in fact worked with only one actual New Wave filmmaker, Truffaut, on two films. Malle, Vadim, and Demy were chronologically of the same generation as the nouvelle vague, but their work hovered outside of the core of that movement, which consisted primarily of the Cahiers “posse” and the “Left Bank” filmmakers (Resnais, Varda, Marker).

Moreau was a stage-trained actress who had been a member of the Comédie-Française. In her early films she played ingénue roles – the film that featured her in that capacity that was best-distributed over here was Jacques Becker's Touchez pas au grisbi (1954). The two films that introduced her to world cinema — Louis Malle's Elevator to the Gallows and The Lovers (both 1958) — found her delivering multi-faceted performances that are simultaneously distant yet sensual, cunning yet sympathetic, and wise yet susceptible to sudden bouts of emotion and ardor.

By today's standards the scene is mildly “naughty” and would probably even pass muster on a regular network. By the standards of the time, though, the scene was objectionable (and even, to some minds, “kinky” – yeah, when the lady likes it, it's a kink!). The scene begins in earnest at 1:13:25.

Moreau's talent was such that she was not branded as “That Lovers girl” after the controversy over the film died down. This was a result of her strict work ethic (best reflected today in the career of her La Truite costar, the adventurous and fearless Isabelle Huppert).

She went from one project to the next, looking for challenging roles that weren't copies of what she had already done. As a result, the early Sixties was an incredibly fertile period for her, in which she moved from character to character, creating some of the performances for which she became best known.


Foremost among these is Truffaut's Jules and Jim (1962) — the claim that she was “a 'New Wave' actress” seems to rest primarily on this one role, that of Catherine, who has affairs with both titular characters (Oskar Werner and Henri Serre). The film is far from my favorite of the New Wave classics, but the fact that it doesn't end on a happy note is probably what has made it such a memorable work for so many viewers. (Contrary to what Hollywood has always thought, most viewers can retain a tragic ending rather than a happy one.) 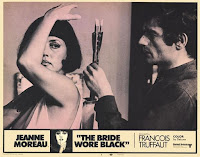 Moreau's other starring performance for Truffaut is one that I can return to again and again — her chameleonic turn in The Bride Wore Black (1968) For me, Truffaut was at his absolute best adapting “Serie noire” titles, and with Bride he not only brought to life the wonderful first suspense novel by noir master Cornell Woolrich, he also came up with a better conclusion than Woolrich had in the book.

Moreau is centerstage throughout, and she is a magnificent figure. Like most of Woolrich's protagonists, her character is pretty much a cipher who exists as a function of her need for vengeance — she has sworn to kill the men who shot her husband on their wedding day (the plot of Kill Bill, another “lift and carry” job by Tarantino). As she insinuates herself into the lives of her targets, she is an angel of vengeance who seduces in order to kill. One can't imagine many actresses who could carry off the role (more properly, roles) even half as well. 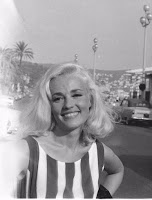 Closing out her brief association with the New Wave, I come to Jacques Demy's Bay of Angels (1963), a film about gambling that is one of those films that one enjoys while watching but can't quite remember afterward.

The first thing that sticks to the brain pan is the sight of Moreau as a platinum blonde. The other central attraction is the stunning first shot of the film, which consists of a track backward from Moreau.

Otherwise, the film is a solid piece of storytelling about the lure of gambling, but nothing in it quite equals the beauty of Moreau and the genius of this bravura shot. (The scene is nowhere online at the moment, but its opening can seen in this GIF and it is seen briefly in a trailer here.)

Moreau acted in films in several countries, but her sharpest work was in French cinema. She only worked with Don Luis Bunuel once, but the collaboration was a memorable one, Diary of a Chambermaid (1964). It's an incredible vehicle for Jeanne that contains the immortal moment she models boots bought for her by the family patriarch.

One of the great artists at work in both England and France in the Sixties and Seventies was the American expatriate (read: blacklist victim) Joseph Losey. Moreau worked him twice, in Eva (1962) and in a supporting part in La Truite (1982), starring Isabelle Huppert.

Moreau only worked once with Antonioni, but it was on the wonderfully atmospheric La Notte (1961) with Marcello Mastroianni and Monica Vitti. I say only worked with the great filmmaker once because a documentary made by his daughter about the filming of Beyond the Clouds (1995) indicates that Wim Wenders directed the sequence she did in that film with, again, the great Marcello. So, although she is in that Antonioni film from an Antonioni script, she was directed by Wenders.
The dedicated work ethic of European performers means that even if they are “A-list” stars they are more than willing to play smaller roles in movies they deem significant (in America A-listers avoid supporting roles, unless they are wise enough to turn “character actor” for a role, as with Connery in The Untouchables). Moreau worked in this capacity for a number of directors, including Funhouse fave Bertrand Blier.  She had a very memorable role in Blier's provocative (and wonderful) Going Places (1974).


She also maintained a friendship with writer Marguerite Duras, with whom she worked in various capacities.

Moreau acted for Duras in Nathalie Granger, 1972, starred in a film that Duras adapted as a screenwriter from a work by Jean Genet (Mademoiselle, 1966), narrated a movie based on her work (The Lover, 1992) and, finally, played her in Cet amour-là (2001).

One of the most talented and prolific French filmmakers working today is Francois Ozon. Some of his films are star-studded (8 Women, In the House); others feature excellent performers who are unknown to the average viewer (Criminal Lovers, Frantz). In 2005, Ozon cast Moreau as a grandmother dealing with her grandson being stricken with cancer in the underrated Time to Leave.

Moreau appeared in a select amount of American movies and international coproductions shot in English. These films ranged from the prestige (Frankenheimer's The Train Kazan's The Last Tycoon) to films that represented little more than a paycheck (Ever After).

Her strongest collaboration with an American filmmaker was with Le Grand Orson. She had prominent roles in all his Sixties features, including the superb Chimes at Midnight (1965) and the never finished The Deep. Years back I saw a German archivist discuss the fact that Orson had indeed shot just about all of his script for The Deep — he just never recorded the dialogue (the film was shot on board a boat, and the ambient sound was useless). Perhaps the single clearest example of Orson shooting himself in the foot, The Deep was a project that Orson shelved, when all he had to do was gather the cast and have them dub in their lines. Such were the complicated and sad ways in which he self-destructed.

Moreau's most interesting legacy and the hardest to trace for American viewers is her work as a film director. Her film Lumiere (1976), in which she starred, hasn't been available since the Eighties (on VHS); it also hasn't played the rep-house circuit since the Reagan era. (I saw it back then, but its plot points and imagery have disappeared from mine own mind.)

She also directed a doc on Lillian Gish (no info on that at all). Her second and last fiction film as a director is tucked away “above ground” on the Internet. (I won't be supplying the URL on here, but it's easily found with the help of a search engine.) 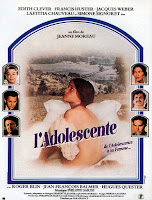 L'Adolescente (1979) is an emotional coming of age story about a 12-year-old girl's eventful summer vacation in 1939, as the world hovered on the brink of war. Moreau doesn’t appear in the film, but she put her imprint on it by narrating the film. Her voice was definitely one of her greatest tools as an actress; it remained her signature — along with her full-lipped, determined visage — as an actress.

The plot follows Marie (Laetitia Chauveau) as she goes with her parents to her grandmother’s house in the provinces for the summer. Marie develops her first crush on the local doctor (Francis Huster), who in turn is in love with her mother (Edith Clever). Marie's crush is conveyed with great sincerity, but her subsequent focus after she is rebuffed by the doctor — to make her parents love each other again — reminds us that she is still a little girl whose world revolves around the adults in her life.

The star of the film isn’t Chauveau (who does look like a miniature version of the young Moreau), but her grandmother, played by the inimitable Simone Signoret. She is the perfect grandmother — caring and all-knowing, superstitious, old-fashioned, and yet very aware of modern behavior (and thus very discreet). 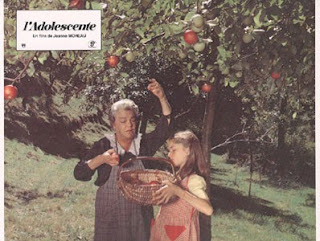 Signoret never gave a bad performance in her later work, but it’s interesting to consider the comparison to Moreau. While Jeanne remained a romantic lead for long into her middle age (as has Huppert), Signoret became a character person much earlier on.  Both Jeanne and Simone were consummate talents, whose once mellifluous voices were made very raspy by decades of smoking.
****

In closing, some “bonus” clips, starting with a few of Moreau singing. It seemed that every European actress of her era had a side career as a singer, and La Moreau was no exception. Here she is on TV, singing the song from Jules and Jim, “Le tourbillon.”

A nice bit of Sixties kitsch: Though billed as a Scopitone, this 1963 performance seems to have simply been a performance on television.

One of her finest performances in a most extreme motion picture (extreme in its level of passion and obsession) is the starring role in Tony Richardson’s Mademoiselle (1966). Patti Smith wrote a frenzied, gonzo paean to the film, it is one of John Waters’ favorites, and it most certainly deserves your attention. Here is a key sequence, without subtitles (although you don’t need them):

Moreau had a smaller role in Wenders’ Until the End of the World (1991), but she is the “final destination” in the search undertaken by our hero (William Hurt). Her blindness causes her scientist husband (Max von Sydow) to create a device that can “record” dreams and show them on a little portable device (prefiguring pretty much all of 21st-century portable media).

If, as was rumored in jest, Fassbinder made his final film Querelle (1982) just to see Brad Davis in a French sailor suit, he surely also made the film to see Jeanne Moreau perform a torchy ballad written around an adage by Oscar Wilde.