Sure to Go Down: a posting of Radley Metzger's 'The Image'

YouTube sure has changed. Its capricious enforcement of copyright claims continues apace, but its anti-nudity/anti-sex stance has morphed into a “don't ask, don't tell” mode, in which adult materials stay up until someone, anyone, complains about them.

Thus, the surprising discovery of Radley Metzger's The Image (aka The Punishment of Anne,” 1975) in its entirety, unedited and uncensored, on YT. Don't get me wrong — I'm not complaining about this. I think adult clips should be on YT, behind a firewall, as is the case with this film. The picture is a stylish slice of “Euro chic” from Metzger that he signed with his own name. The only other film with hardcore scenes he released under his real name was Score (1974), which circulated in various versions, some of which were decidedly “soft.”

Although it starts out like Metzger's softcore features, The Image takes a full turn just before its midpoint and becomes a hardcore s&m movie that lacks only “money shots,” as Metzger's female characters were allowed to enjoy their orgasms and the lead male here comes inside them, rather than doing the usual “full display” ritual.

The film boasts picturesque location footage of Paris and has one aspect familiar from Euro-produced sexploitation — a bizarrely chosen older male voice for the lead (think Norman Rose or John Bartholomew Tucker on a not-so-wholesome day), meaning the narration sounds like a slightly skewed movie trailer.


The picture has an interesting pedigree: It was adapted from a kinky 1956 novel by “Jean de Berg,” an alias of Catherine Robbe-Grillet, the wife of novelist (and fellow bondage lover) Alain R-G. The plot is a variation on The Story of O, with a dominatrix character added into the proceedings. The protagonist (Carl Parker) is “offered” his slave (Mary Mendum) by the domme (Marilyn Roberts), who starts out as a stereotype but winds up becoming the true female lead in the story.
Given that Catherine R-G (still with us, as of this writing) is a rather buttoned-down type (see her supporting roles in her husband's films), it makes perfect sense that the more intense but less conventionally attractive domme figure ultimately becomes the most intriguing member of the lead trio.

Although the domme figure is the best-sketched female character, the submissive is the best rendered, thanks to an intense performance by Mendum. She is the single best “discovery” in the later work of Joe Sarno. She starred in five of Joe's films under the name “Rebecca Brooke,” most notably Abigail Leslie Is Back in Town (1975). 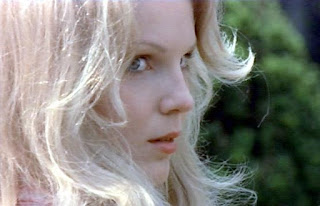 Coming across as a kinkier cousin to Lara Parker (“Angelique” from the original Dark Shadows), Mendum was terrific in the Sarno films, mostly because she always appeared on the verge of both an orgasm and a nervous breakdown. She delivered Joe's often over-ripe dialogue perfectly and was, along with Jamie Gillis, one of the few performers who really “got” what Sarno was doing (angst-ridden melodramas with a kinky undercurrent).

In The Image she is equally “on the edge” throughout. She perfectly conveys her character's desire for pain and her transformation when forced to sublimate her desires in a public setting. Online sources say that she was dating Metzger at the time the film was made, which indicates that theirs was, shall we say, an “understanding” connection.

Given the fact that Sarno kept making softcore for as long as he could (and he never used his real name on the hardcore he subsequently made), it's surprising to see Mendum engage in two graphic oral sex scenes, letting go in two urination humiliations, and being whipped and tormented in Metzger's picture.

As noted above, Metzger was no stranger to directing hardcore by '75, since he was already in his Henry Paris period. It is jarring, though, to see The Image make the turn from soft- to hardcore midway through — the beautiful Parisian location footage, for instance, is suddenly used only for establishing shots rather than providing picturesque locations for the action.

What is not surprising is how (that word again!) classy the film is, compared to other hardcore, and how the film has a distinctly male point of view but  also explores the conflicted sensations and emotions of its women characters.

Catch it while if you can on YT, but most certainly also check out the Metzger-authorized Synapse release of the film on disc!