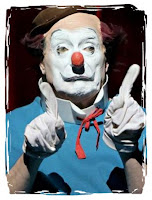 The death of the very gifted French physical comic and gagsmith Pierre Etaix last week at the age of 87 was not as sad an event as it could've been. That's because this wonderful comedian and fine filmmaker got his just due back in 2012 when his films were freed from a legal tangle and played around the world in beautifully restored prints, for the first time in several decades.

I wrote a review for the Disc Dish website of the comprehensive three-disc Criterion box that came out in 2013, after the films had played theatrically. The review presented the central details of Etaix's life and career, so I wanted to post it here (in slightly altered form) as a tribute to this fine artist.


Etaix was a multi-talented individual who at various times worked as a cartoonist, a cabaret entertainer, a character actor, and a circus clown. (He returned to the last-mentioned profession after his last self-directed film flopped in 1971.) His cartoons and clowning — plus his deep love for the American comedians of the silent and early talkie eras — led him to work with the legendary Jacques Tati as an assistant director and gag-designer on Mon Oncle (1958).

After his stint with Tati, Etaix began crafting his own comedy vehicles with the help of the great screenwriter Jean-Claude Carriere (The Return of Martin Guerre, Belle de Jour, The Discreet Charm of the Bourgeoisie). The five movies and three shorts he directed over the period of a decade are indeed a revelation for fans of classic film comedy, as Etaix and Carriere did a superb job of finding situations for Etaix’s schlemiel-like character to struggle with.

Although he praises a number of American comedians in a 2011 documentary included in the Criterion set as a supplement — Pierre Etaix, un destine animé, directed by his wife Odile — his onscreen character is most like Buster Keaton’s, as he is often financially comfortable, but never at ease with his surroundings. Carriere notes in the documentary that the situations they devised together found Etaix “confronting a hostile world.”

Using deft camerawork, careful framing, and precise editing, Etaix succeeded admirably in creating his own comic universe. A frequently used setup involves a succession of characters or objects interlocking to form the perfect live-action equivalent of a Rube Goldberg contraption, with the clueless Etaix moving on after having initiated the chaos. 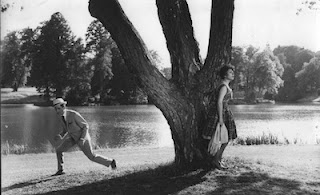 Etaix’s first two shorts, “Rupture” and “Happy Anniversary” (which won an Oscar for Best Short Subject in 1963) are letter-perfect evocations of the classic two-reel comedies of Hollywood’s Golden Age. He followed those two gems (co-directed with Carriere) with his debut feature, The Suitor (1963). Here Etaix plays an empty-headed millionaire searching around Paris for a wife. Like all of Etaix’s features, the film is episodic and crammed with smaller gags that are just as funny as the major set-pieces.

“Happy Anniversary” and The Suitor are indeed the best introductions to Etaix, but his most ambitious and most touching feature followed. In Yoyo (1965) he plays another lonely rich man, who in this case runs away with the circus. In the present-day video introductions included in the box set, Etaix declares this to be his favorite film, and it certainly is his most layered creation. The first 35 minutes function as a self-contained silent movie, then the movie turns into a valentine to circus life — and, oddly enough, the price of TV fame.

Etaix talks about the failure of Yoyo in his video introduction. It was so poorly received that he made certain his next film was a very basic comedy. As Long as You’ve Got Your Health (1966), as it was re-edited by Etaix in 1971, is simply four well-crafted short films shown end to end. The standout is the second, a strange journey through a crowded movie theater then into an apartment where everyone speaks in TV commercial taglines. 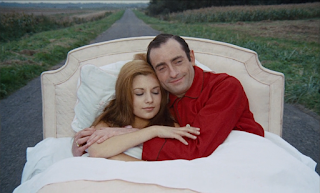 When a retrospective of these eight films was held in October 2012 at the Film Forum in New York City, much was said about the fourth feature, Le Grand Amour (1969), being Etaix’s best work. The film is very accomplished, but its extremely linear plotline marks it as a comedown of sorts from the raucous nature of the preceding three features — although a bravura dream sequence in which the characters travel the back roads of France on moving beds is perhaps the finest (and weirdest) single set-piece he ever dreamt up.

Etaix's last film as a director is a fascinating anomaly — so much so that it merited only a single screening in the Film Forum retro and was the only Etaix feature not shown on TCM when the movies had their American TV debut in 2013. Land of Milk and Honey (1971) is a documentary Etaix made about the French on vacation in the period after May 1968 (when political riots paralyzed the city of Paris). 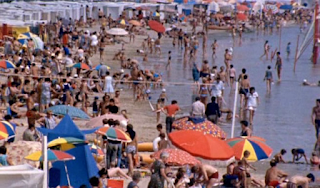 The film is indeed a comedy, but a crueler creation than any of Etaix’s other work — it doesn’t openly mock the vacationers shown, but it surely does depict them at their most ridiculous, ignorant, and self-satisfied. The film was disliked so intensely by both critics and the public that it killed his filmmaking career.

The documentary in the Criterion box by Odile Etaix offers a fascinating portrait of Pierre in all his guises. Included is a segment in which Etaix reflects on his longtime friendship with Jerry Lewis (who loved Yoyo). Sadly, no mention is made of the one time they worked together. For, in addition to Etaix appearing as an actor in Kaurismaki’s Le Havre (2011) and other dramas and comedies, he costarred in Lewis’ notoriously unfinished The Day The Clown Cried....
Posted by Media Funhouse at 1:38 AM