Lost and found: an unofficial trilogy of films by Kiyoshi Kurosawa

Quiet, understated works, flawed though they may be, deserve to be praised in this louder-by-the-minute era. Thus my love for the work of filmmaker Kiyoshi Kurosawa (no relation to Akira), whom I interviewed on the Funhouse several years ago.

Kurosawa has kept on making haunting films since that moment in the early 2000s when a festival of his work made the rounds of the U.S. thanks to the now-defunct distributor Cowboy Booking International. One of his later pictures, Tokyo Sonata (2008), received strong reviews, but his other recent works since 2001 have either sunk without a trace in America or, thankfully, gotten some attention on DVD (my review of the U.S. release of his 2012 TV miniseries Penance, can be found here).

His latest film, Journey to the Shore, just played at the New York Film Festival and, as of this writing, has no U.S. distributor. He received the director’s prize for the film at the “Certain Regard” section of the Cannes Film Festival this year. The film’s first half is as touching and profound as Kurosawa’s best works. The second half is uneven in tone, but even KK’s flawed films need to be seen by dedicated cinephiles.

The plot concerns a piano teacher (Eri Fukatsu) who is visited by her dead husband (Tadanobu Asano). He promptly takes her on a series of short trips to encounter people he wants to see again. As the film proceeds, we learn that there are other dead souls dwelling among us, and that their post-mortem existences are guided by certain “rules.”

The first half of the film, in which the husband’s reappearance is not explained at all (he defines the situation simply by telling his wife that he died and didn’t abandon her, as she suspected), is reminiscent of Anthony Minghella’s beautiful Truly Madly Deeply (1990), in which a mourning woman is visited by the spirit of her dead boyfriend — with no explicit explanation given for his intact, corporeal condition. All that matters in both films are the emotions felt by the grieving female lead. 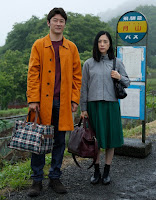 Like Penance, this new work by Kurosawa is based on a novel. Thus one assumption is that the less than compelling rules governing the dead characters come from the book. They move the film in a different direction, one in which honest understatement (that word again, the perfect label for KK’s work) is set aside in favor of a more conventional, more sentimental tone, as Fukatsu’s character beings to wonder how long her husband will remain among the living.

The aspect that must have drawn Kurosawa to adapt the novel is the theme of “getting back” a lost loved one. Journey stands as the third entry in an unofficial trilogy that includes KK’s first non-genre drama, License to Live (1998) and his more recent, Chris Marker-like, Real (2013).

License remains one of my favorite KK films because it because it hit me quite hard when I first saw it, right after the death of a close relative. The film concerns a young man who comes out of a decade-long coma in his 20s, causing his family (which has disintegrated while he has been in the hospital) to reform, to show him they care about his “rebirth.”

The film is a low-key drama that eschews what I call “the Spielberg Squeeze,” in which a director shamelessly tries to move the viewer to tears. Instead, Kurosawa involves the viewer in the story by depicting the world around the young man in an alien and static fashion, as he sees it. The only note of reality and honesty in the young man's life is supplied by a down-to-earth fishing instructor (played by Kurosawa stalwart Koji Yakusho).

Real offers romance as fantasy, but it has much in common with License and the first half of Journey. A young man wants to rouse his comatose lover back to consciousness by entering into her thoughts; a major twist follows near the midpoint, with all that we have seen being turned upside down.

Despite the fact that Kurosawa has made several crime and horror films, this is one of his oddest creations, since it is a raw, touching melodrama that is punctuated by computer graphics — these effects supply some fascinating imagery for most of the film, but result in a surprisingly bizarre, out-there moment in the final sequence. Aside from that moment, though, the focus here, as always with KK, is on the characters’ emotions, not a Spielbergian childlike sense of “wonder.”

As was the case with License and Real, the most poignant moments in Journey all concern that moment when the bereaved individual is able to be with their “lost” love again. License is alone in offering the POV of the “lost” individual, which is what makes it so singular and effective.

In my interview with Kurosawa he spoke about having a major admiration for John Cassavetes. That connection is clear in Journey, especially if one keeps in mind JC’s last films (Opening Night, Love Streams), which included potent doses of magical realism. Kurosawa continues to avoid mawkish sentimentality, but here the plot dictates that he indulge in over-the-top fantasy as the film moves on. 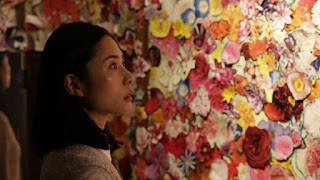 Thus the film is a bit of a bumpy ride encompassing both gorgeous moments of genuine emotion and plot exposition that seem closer to the tiresome American tearjerker Ghost than Truly Madly Deeply.

The musical soundtrack by Naoko Eto and Yoshihide Otomo is conventionally emotional, but the lead performance by Fukatsu is superb, keeping the film on an even keel from its earliest moments to the higher-key finale. 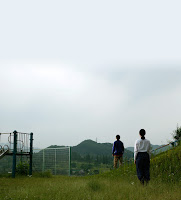 Kurosawa was unable to attend the NYFF, but sent tapes to be shown before and after the film. The introductory one was curious, in that he didn’t want to give away the fact that the husband is dead (one of the first things the husband says to his wife is to acknowledge that… he’s dead). The one after the film was really interesting, in that: a.) no one had announced the tape would appear, so only the people who sat through *all* the credits caught it; b.) he focused entirely on a moment I confess I missed entirely — the shadow of a bird that appears over a character in the climactic moment.

He revealed that the end of the novel is majestic and bigger than life, but that he did not want to use computer graphics for the moment, so he chose simply to accomplish the same effect with editing. He was overjoyed that a bird happened to fly over at that exact minute since, he noted, it was a beautiful touch that he never would’ve thought of adding on his own.

One hopes that Journey and the other “missing” Kurosawa films acquire U.S. distribution. Kiyoshi Kurosawa is too talented an artist to be overlooked.
Posted by Media Funhouse at 6:48 PM