My tour of Honest Ed's in Toronto 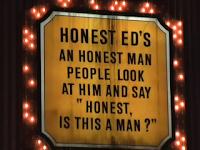 Viewers of the Funhouse TV show will know of my affection for kitsch palaces, junk shops, dollar stores, and assorted odd emporia. Thus upon introduction to Honest Ed's in Toronto, I felt I had to share the wonders within with viewers of the show, and now, the readers of this blog.

Honest Ed's does indeed sell cut-rate merchandise, odd trinkets, Canadian tourist items, and Xtian kitsch. The thing that stuns me about the place, however, is not only that it is literally a giant edifice running two city blocks (in which it is incredibly easy to get lost), but that it also serves as a sort of "Museum of Theater" (New York's Broadway and London's West End theater) covering the Sixties through the Eighties.

I explained all about the store in an earlier blog entry (found here), so I will not reiterate its history and its ties to the Toronto theater community. Instead I will just direct you to my little "tour video" of the place. Toronto, and North America, will lose something mighty precious and weird when the store does finally close up shop in December of 2016....

Posted by Media Funhouse at 4:34 PM