The last year has seen several late-night hosts flee their shows and others fly into the slots. One can quickly see the result of the hundreds of staff meetings that were held to decide how the new shows should make a splash:

— Don't worry about the “flow” of a particular episode, just assemble the shows out of a series of “viral” segments. To put it simpler: book an A-list guest and make certain to get them to either tell a short tale that works well as a YouTube video, or involve them in a “stupid human trick” (the kind of thing your local bar might find too stupid even for a trivia or talent night).

The goofier the A-lister is willing to be (dress up, dance stupidly, sing badly, do a moronic physical stunt), the higher the recognition and the stronger the “brand” will become. (Conceiving of a show as a 30- or 60-minute entity is so 20th century — just forget it!) Getting an A-lister to act like an idiot = ratings gold.

— Make certain to repeat segments that the audience likes. In some cases, it's possible the audience can made to like anything, so just repeat the segment until the audience becomes so familiar with it that they begin to look forward to it.

Viewers like myself who dread segments that are run into the ground (Larry Wilmore, no more “Keepin' It 100” please!) are not the demographic these producers want — it's those who will devote time to something they don't quite enjoy; hey, people have been watching the walking corpse called SNL for decades after it last exhibited any originality or innovation.

— When a host exits, make sure to ramp up the sentiment as he prepares to say goodbye. Make certain the publicists issue lists of their “last-ever” guests, as if it actually means something. Evoke the specter of Johnny Carson's last shows (Bette Midler singing to him; Johnny alone on the stool; the low-key, homespun farewell).

— Make sure you replace your white, middle-aged, straight male host with another white, middle-aged, straight male host. If somehow a woman or a person of color gets a show, kill it the instant the ratings dip – if a white guy's ratings start to slide, make certain to keep him on the air for-fuckin'-ever. He is an institution, he has some kind of fan-base, we can save his show.

The women hosts, the black/Latino/Asian hosts (oh right, there never was an Asian host) must hit the scrap heap if there's any question of stability. I know, I know — Chelsea Handler was doing wonderfully at the time she quit; what she did, brilliantly, to attract an audience was move daytime gossip-talk into the late-evening hours... and she got big ratings for a cable network. But not enough for CBS or NBC to want her....

— LCD, LCD, LCD. There is no such thing as too much LCD-thinking. And don't worry about the viewership suspecting this – they'll eventually come around and get used to the host and his (always his!) way of doing things. In fact most of them won't even know that LCD stands for lowest common denominator.... 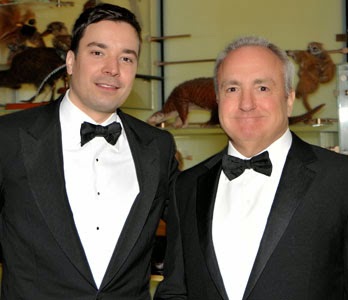 The late-night changes in the last few months have all revolved around three networks: NBC, CBS, and Comedy Central. In the case of NBC, the less said the better — I was never a big Leno fan, but his being edged out because of age was ugly, as was the handing over of all late-night slots to Comedy Criminal No. 1 (tm), Lorne Michaels.

Michaels has been single-handedly responsible for more bad comedy in the last three decades than any other individual, thus earning him that sobriquet. He's now the “realtor” issuing placement on the late-night NBC schedule. His encroachment into weeknights began, of course, with the plucking of Conan out of the writer's room. Conan is pretty self-effacing and did have comedy talent; he's also, natch, a middle-aged, straight white guy.

Jimmy Fallon, on the other hand, is a habitual giggler, and giggling is rrrrreally annoying in comedy (see: Skelton, Red). One can only hope we'll someday discover that he's either drunk or high on the show, because dammit, the shit he's laughing at isn't at all funny. (He's the Harvey Korman of the 21st century, splitting his sides over things that aren't amusing.) 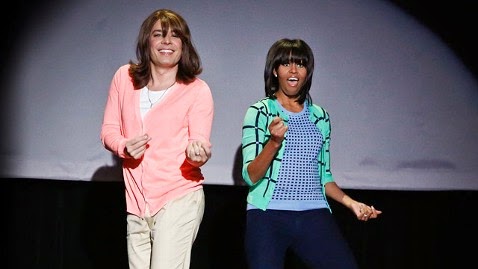 Fallon's version of The Tonight Show took the Jimmy Kimmel formula of fabricating episodes out of “viral videos” (“celebs read their mean tweets – people will love that!”) and ran with it, so that it now can't be classified as a talk show. It is “stupid human tricks” with some sit-down promotional chatter. For his part, Kimmel is now fast on his way to becoming an eminence grise in the late-night world; he's the “guy who next door” whose standup skill has improved somewhat, but whose sketch-acting talent is non-existent.

The peacock network handing the keys to late-night to Comedy Criminal No. 1 (tm) has had nothing on the mess that is CBS late night. Letterman “decided” he would retire shortly after Leno was booted out (gray hair is a no-no in late night now; the latter-day Carson wouldn't last a day). Colbert was chosen as a replacement for him, which makes sense (and, again, adheres to the straight/white/middle-aged formula for late-night). I loved Colbert's character when it began and he was bold, obnoxious, and, on occasion, really mean. He was willing to not get laughs for a while in order to be funny, the true sign of a master comedian:


The interesting thing is that Colbert will be himself, not his beloved conservative blowhard character, on his CBS late-night show. Since the character had indeed jumped several sharks in the last few years (that good old Archie Bunker cuddliness is one of the central problems with American TV comedy), it will be a relief to see him not try to keep that persona up any longer — but will his new “real” persona be based entirely around snark?

The more interesting slot, though, is the one after Letterman, the one which Craig Ferguson recently abandoned (and which was carved out by the always erratic and very watchable Tom Snyder — a straight, white, middle-aged guy, but one who was very much off the conventional charts, as he still valued conversation above all).

The strangest thing about Ferguson was that he was, in my opinion, the most compulsively watchable of the half-dozen-plus late-night hosts (do we count the unkillable Carson Daly?), simply because he made it all look so easy. He also was able to do something none of the others can do: be serious without mawkishness:

He is a standup comic by trade, so his opening monologue flowed beautifully. Of course it was scripted, but he was one of the few late-night hosts who was able to make it look like he was just ad-libbing the whole thing. The ridiculously cheap nature of his talk show made it all the more endearing — no in-house band, a cohost robot (voiced by Josh Robert Thompson), goofy segments involving puppets, and the hoariest of all showbiz clichés: a pantomime horse.

The thing that Ferguson did not excel at was interviewing. He was loose and informal, but he also seemed competitive with his comedian guests — not for him the classic straight-man role inhabited so beautifully by Steve Allen and Carson. He did ask the guests about their current projects and recent activities, but it was pretty much all trite talk inspired by the Carson show-biz model; once Johnny had settled in L.A. and The Tonight Show needed to be “souped up” for the Seventies, the seeds had been planted for today’s “non-interview interviews” (thanks to Robert Klein's “no-news news”) on late-night talk shows.

The single oddest thing about Craig's very low-key last episode was that he had as his sole guest Jay Leno, and the two pretty much admitted they had never really enjoyed conducting interviews. It not only seemed as if they burned out on it, it clearly sounded like they hadn’t *ever* liked doing it. This kind of explained why Craig had been so off-the-cuff while talking to guests (he didn’t care much about what they were saying), but it also sadly undercut the wonderful experiments he had conducted on the show, which included taking it to other countries (something which had been generally avoided since the heyday of Jack Paar and his former writer, Dick Cavett).

He also took a chance at doing a one-guest show, something that been done brilliantly in the b&w days of the medium and later, again, by Cavett. Ferguson’s choice for a sole guest in a show that aired in May of 2013 was the incredibly eloquent and funny Stephen Fry:

Now that Craig has ditched his late-night show (to go back to standup, something he clearly does like to do and does beautifully, and to host a rrrrrreally bad syndicated game show), the Late Late Show slot remains one of the few really interesting things on late-night TV, simply because CBS clearly wants to dump their Ferguson reruns forever and instead is offering a succession of different hosts, from all of the categories that are constantly overlooked for permanent late-night slots: women, people of color, gay entertainers, etc etc.

As a result, you can never be certain what you’ll see in that slot these days: it could be the mundane sight of someone who is under CBS contract (as so many of these hosts are — either because they have an upcoming CBS series coming on, or their older series was cancelled) simply hyping their new show (as Thomas Lennon did), or it could be a more “unconventional” host (like Sean Hayes) interviewing a guest you might usually see only in passing on a late-night show (as with Marion Cotillard, whom he spoke to for two full segments; her film clip was also [gasp] in French with English subtitles!). 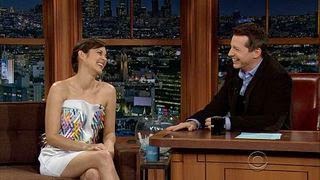 So currently the Late Late Show is worth a look-see, if only to see different kinds of hosts doing the late-night thing, and witness their interaction with an oddly unpredictable group of guests. For viewers like myself who prefer an “edge” to their comedy, the late-night shows will never have that ever again. It's too costly for the networks to do anything unpredictable in such valuable “real estate” — thus the involvement of Comedy Criminal No. 1 (tm).

Seeing a revolving group of hosts take on a low-budget late-night show is far more interesting, though, than watching someone who is bored with his job and/or just aiming for the LCD. (Is there any greater way to measure a host's disinterest or tendency towards both LCD-thinking *and* OCD-behavior than to count the giggle-breaks?)

The late-night talk show should serve as both an arena for guests of different stripes (but it never is), and it should also have longer segments that are not purely motivated by a new film/series/book/CD (but it never is). What we can know with the utmost certainty is that The Late Late Show will soon be where it has to be, given the tunnel-visioned network mindset: helmed by yet another straight, white guy who's nearly middle-aged (36), British comic actor James Corden.

Corden may be an unknown commodity here in the U.S., but it's for sure that nothing too radical will occur on his show. It can't — it's late-night network TV....
Posted by Media Funhouse at 9:26 AM

I wonder if James Corden is distantly related to Henry Corden ?