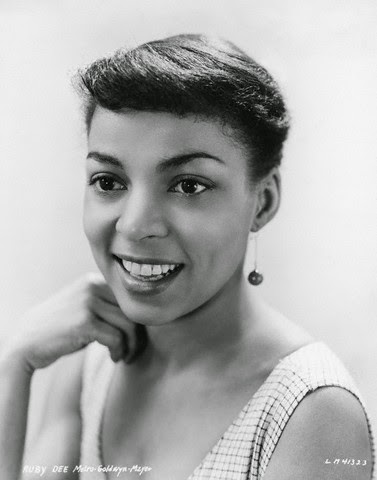 Since this is not an obituary blog (all appearances to the contrary), I have regretted not getting the chance to write about some Deceased Artistes in the last few months, but I do hope to be able to pay tribute to them at some point. With the death of Ruby Dee this week, however, I did find some wonderful clips “hidden in plain sight” that I want to share.

Ms. Dee's accomplishments were incredible (and are outlined on the ossieandruby.com site): 70 years as a professional performer, a lifetime working for social justice, and the inspirational partnership with her late husband Ossie Davis (the two were together for nearly sixty years, until Ossie's death in 2005). She continued to work steadily until her death at 91 and was the recipient of many awards. (Need I add that her only Oscar nod was a nomination for playing Denzel's mother in the mob movie American Gangster? The Oscars are dismal.) 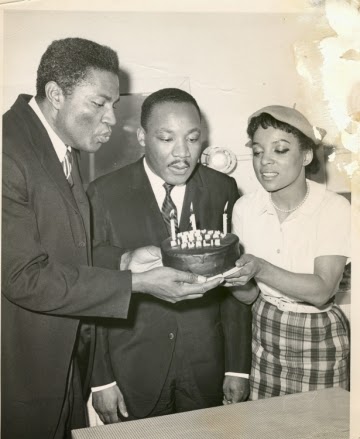 Her movie roles are easily found, her work onstage fondly remembered and positively reviewed, but it's her work on TV that concerns me here, in particular a two-season show she and Ossie had on PBS called With Ossie and Ruby ('80-'82). The show consisted of the couple performing, interviewing celebrities and friends, and sitting back and watching fellow performers take over. A commercial for the show (with a great guest list) is here.

One poster has shared some moments from the show, and another has given us a terrific full episode. First off, a spoken word piece called “Men Who Have Loved Me” by Ms. Dee – she wasn't a singer, but could do wonders with a poem or monologue (here with Billy Taylor on piano and Max Roach on drums):


In full flourish here, performing a poem with Ossie by Carolyn M. Rodgers called “When the Revolution Came.” A great example of their talent, finding the passion – and evident good-natured humor – in the piece.


The piece de resistance – when I found this show up in its entirety, I knew I had to share it immediately. Gil Scott-Heron, whom I paid tribute to here, was the sole guest on an episode of With Ossie and Ruby, and the entire show is an unmitigated joy. Gil performs with his great jazz ensemble the Midnight Band, Ossie and Ruby interview him, and best of all, they recite his poetry and lyrics, and at times they recite them along with Gil, which is beyond amazing.

In part one of the show, Gil sings “Hello Sunday, Hello Road,” Ossie and Ruby recite one of his poems, he recites the beautifully eloquent “Jose Campos Torres,” and Ruby and Ossie recite his terrific song “Winter in America.” The beauty of the final line of the chorus is driven home by the Davises – “Ain't nobody fightin'/because nobody knows what to save....”


Part two concludes “Winter in America.” Ruby and Ossie do a gorgeous version of Gil's “Billy Green Is Dead.” Seeing Gil's beaming smile as he watches Ossie recite “The Train From Washington” (at 4:05) is worth the whole ride. Seeing him respect the Davises' talent and them clearly respecting his musical and poetic ability is a fucking delight.

And because the show hasn't been great enough so far, this part closes out with Gil and Ossie and Ruby reciting “The Revolution Will Not Be Televised” (with an updated reference to “George 'Papa Doc' Bush” – remember Reagan was president when this aired). That is followed by “Gun,” an always timeless song about how much Americans love their guns ("When other folks give up theirs, I'll give up mine"):


The third and last part of the show has Gil finishing up “Gun,” Ruby and Ossie and Gil reciting “Morning Thoughts” (with a beautiful musical backing), and Gil doing his reggae number, “Storm Music.”

It's kind of amazing to think that performances of this caliber used to be on PBS on a semi-regular basis. Now they have to be sought out online, but it's great to know that they were recorded and are instantly available (for as long as those who hold the publishing rights allow them to be). As I noted in my Deceased Artiste tribute to Pete Seeger in regard to his mid-Sixties UHF show “Rainbow Quest,” if only TV were always like this....


Although I wanted the GHS appearance on the With Ossie and Ruby TV show to be the main focus of this blog entry, I would be remiss if I didn't close out with this bit of video of the Davises in their 1995 theater production “Two Hah Hahs and a Homeboy.”

Ruby tells Ossie what he should think and say “When I'm Gone.” His final response is very touching, especially in light of the fact that Ossie left us in 2005 and Ruby did keep going for another nine years without him. Her obituaries said her ashes are to be mixed with his, with a nice dedication (“in this thing together”) on the urn.

Posted by Media Funhouse at 3:46 PM